Today We Are All Ma’ams: A Call for Old Lady Feminism 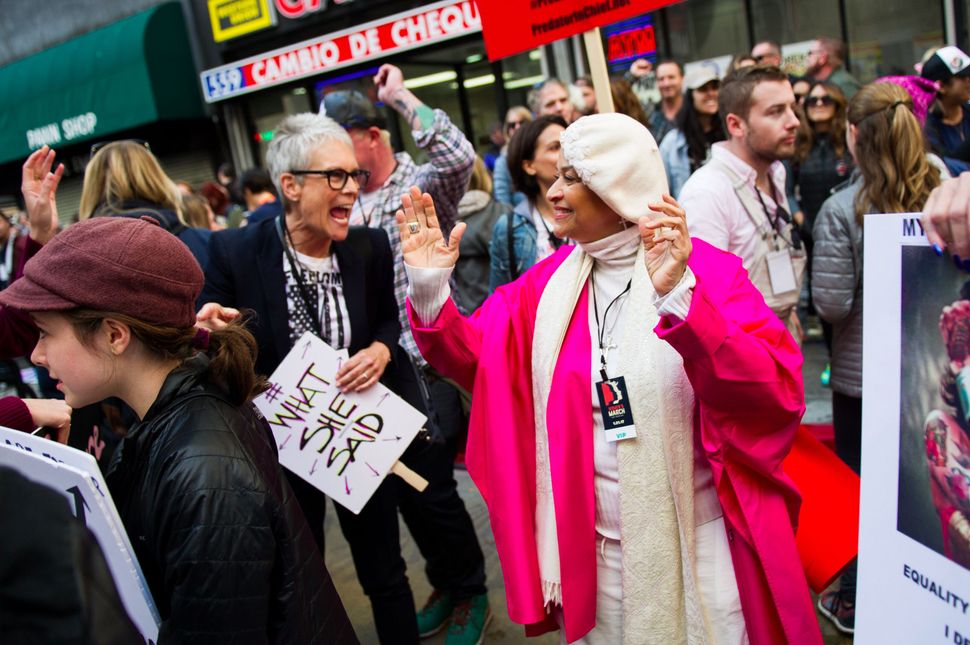 In an easily-overlooked story, Nebraska state senator Bill Kintner, a Republican, resigned after retweeting a photo of Women’s March protestors bearing anti-sexual-assault placards. “Ladies, I think you’re safe,” went the accompanying text, a reference to… gee, I wonder what might have been being referenced here? The point was that the protestors in question (who are, btw, real people) were older women, who, fine, as if this is remotely relevant, do not, as such, look like the women President Donald Trump has historically found grope-worthy.

Much could be said here — lots about how massively and troublingly that tweet gets rape wrong, even by rape-joke standards, and a bit here and there about how jobs these days, even under a Troll in Chief, get lost due to bad tweets, but not all that much, as there was, in this case, more to it. Mainly, though, the story highlights the awkward place of older women in feminism: dismissed by misogynists, but also, too often, by feminism itself, which, to market itself to a skeptical public, needs “fresh” faces and photogenic cover stories. Out with Hillary, in with the socially-aware teens who don’t seem awkward using internet slang. But not really in with them, for they, too, wind up dismissed, because after all, they’re just girls. In with the college women activists, whose jargon is on point, but not with them, either, because — as the detractor brigade regularly insists — aren’t college activists hilarious?

This week, New York Magazine’s The Cut has an excellent series on women and age. I particularly recommend Stella Bugbee’s entry, “Can Age-Shaming Be the Next Fat-Shaming?” Bugbee relates anti-aging measures she began at 25, adding, “Guess what? I still look 40.” It’s a timely topic precisely because of the generational undercurrents to ongoing intra-feminist conflicts, extending into the (seemingly eternal) Bernie vs Hillary battles and the more recent ones over the Women’s March.

To me, this is the crucial thing to remember, solidarity-wise: “Old age,” for women, begins so young. When you’re 22 or so, you hear (at least, I recall reading) that past 20, women are too old to be attractive, because (puts on amateur-evolutionary-psychologist troll voice) men are naturally drawn to very young women, a fact you’ll have to reconcile with all the unsolicited male attention even ordinary-looking women tend to get well past that age. By the time you enter the post-college workforce or graduate training, by the time you’re a “junior” member of any profession, you’re too old to be a fashion model. By 30, you’re full-on “ma’am,” an age-specific term with no male equivalent. (See the wonderful, and Jewishly-titled, Mary Tyler Moore episode, “Today I am a Ma’am.”) In one sense, how bleak! In another, it means that by the time a woman is, say, 65, or menopausal, or whichever other reasonably accepted threshold for ‘not a kid anymore,’ she’s had decades of experience as an “older” woman. Decades! If you’re a woman rather than a girl, you’re old.

This is why the time has come for Old Lady Feminism. For a feminism that directly addresses the continuity between getting the wrong (and inherently finite) sort of attention in professional contexts when one age and getting ignored at another. (On this, see Lisa Miller’s installment.) Or, rather, for a feminism that takes for granted the continuity between rape threats, you’re-too-pretty-to-have-opinions, and you’re-ugly-so-I’m-not-listening. A feminism that knows to automatically dismiss arguments about women’s achievements or ideas that center on entirely irrelevant facts about a woman’s biological clock or place in her menstrual cycle. (Just yesterday, a reader emailed urging me not to “get [my] tampon into a twist.”) A feminism that recognizes all of this for what it is: an attempt at keeping women down. To refocus our attentions onto our physicality, onto our appeal to men, precisely at the exact moments when those concerns interest us the least.

Today We Are All Ma’ams: A Call for Old Lady Feminism