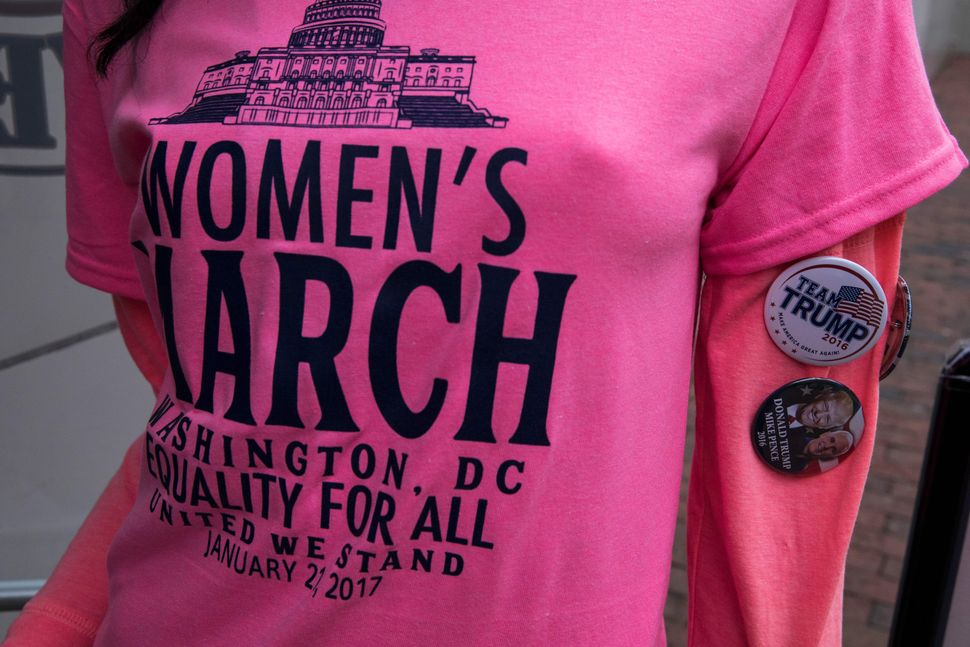 I like clothes as much as the next person/woman. I make no claims of having transcended the desire for the material, and plead guilty to having ended an evening or ten browsing the “We Made Too Much” section of a certain athleisure company’s website. But I’m getting weary of the myth that people’s/women’s shopping habits are the path of most Resistance.

This latest wave of merch-as-politics may have started with the Nasty Woman shirts, but now extends to banal, vaguely empowering expressions of all kinds. As Laura Craik writes at The Pool, fashion’s political turn is understandable but not entirely appealing:

“[W]hy do I feel so queasy at the sight of all the slogan merchandise being paraded down the catwalk in New York? Yes, ‘We Are All Human Beings’ (Creature of Comfort); yes, we should ‘Make America New York’ (Public School) and yes, ‘We Will Not Be Silenced” (Prabal Gurung). The problem is, it’s hard to see what greater good a $150 T-shirt is effecting beyond contributing to the designer’s personal retirement fund. Maybe all the bold statements would be a bit more convincing if a percentage of their sales went to the charity or cause in question.”

Indeed. Brands are seeking profits, and it’s a fair bet that when it comes to public image (and t-shirt slogans) they’re exactly as political as is profitable.

There are still more reasons to be wary of politicized fashion. Consider the recent hubbub over Joshua Kushner’s partner Karlie Kloss appearing as a geisha in a fashion spread in the Vogue’s “diversity” issue. Was this a mistake? Or was it (also) a calculated decision — not necessarily on Kloss’s part personally! — to enter into the ten trillionth outrage and apology cycle, the ones that keep fashion brands and publications in the news? In this specific case or any other, I have no idea, but the pattern is predictable enough at this point that if I, a sweatpants-prone onlooker have noticed it, presumably fashion higher-ups have as well.

There’s also the more serious matter of Ivanka Trump the brand, which it is indeed fun to see falter, even if you personally were never buying the stuff. I applaud the (successful!) efforts of boycott organizers. But if I’m personally tiring of the centrality of boycotts (or, more so, buycotts) to the political conversation, it’s because they reinforce, rather than challenge, the notion that those with $$$ should determine the direction the country goes in. What if you’re not shopping at Nordstrom or using Uber in the first place? What political speech is open to you when messaging is all about consumer choices? What if you don’t have that much wallet to, well, grab?

Yes, it’s important and powerful to point those with cash to spare in the right directions. But at a certain point, a focus on consumer-choice activism contributes to the (false) reputation of liberals as elite or elitist. It can feel like the Trump-era version of the now archaic-seeming concerns, so of-the-moment a couple years ago, regarding where, precisely, one’s food had been ‘sourced.’ Virtue-signaling, yes, but in that way where you seem to be showing your righteous politics but are also displaying your level of disposable income. Resistance requires sacrifice, yes, but is merch-optional.