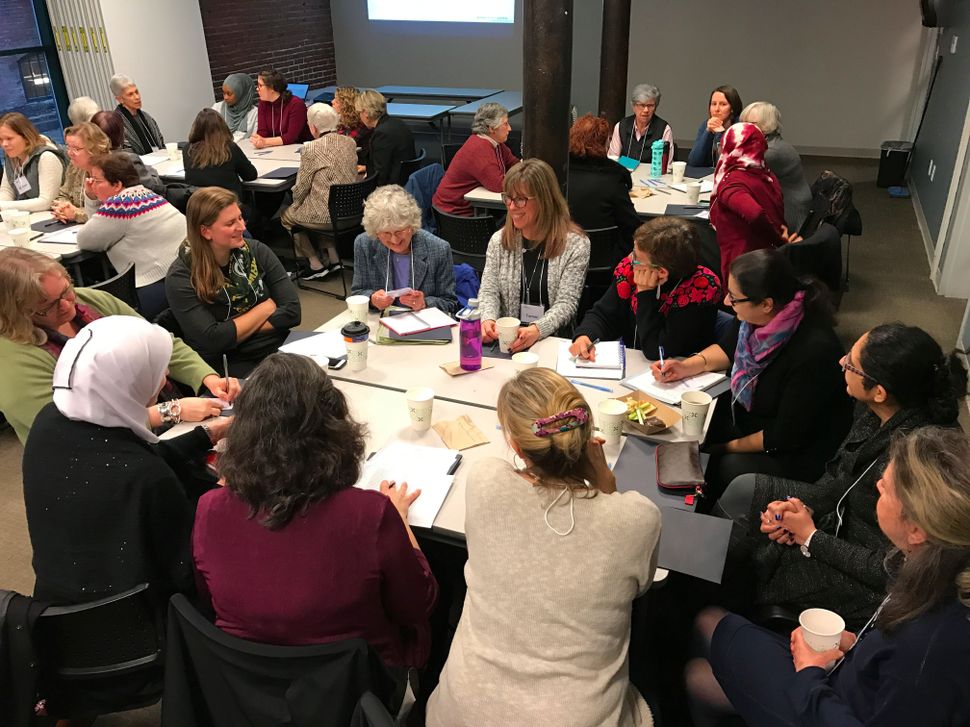 Image by Courtesy of Amanda Scates-Preisinger

A mere thirteen days before the presidential election, the Interfaith Center of Philadelphia formally launched the first of its kind program entitled “Visionary Women: Rooted in Faith, Committed to Justice.” Associate Executive Director of the Interfaith Center, Nicole Diroff was concerned that at best, twenty women would sign on and she would feel compelled to personally invite participants, given that attendees were asked to commit one Sunday afternoon monthly for six months.

On January 22, two days after the inauguration and one day after the Women’s March overtook local, national and international news, I along with 77 other women from all over the Delaware Valley and ranging in age from 18-93 arrived at the Interfaith Center of Philadelphia. Sitting literally and figuratively shoulder to shoulder, women identifying as Christian, Jewish, Muslim, Baha’i, Sikh, Unitarian, Quaker, secular, agnostic and more had with their mere presence and commitment declared ‘hineni’ (here I am) – I am ready to stand up individually and collectively to build bridges between diverse communities, form a strong collective, and advocate for justice.

As a rabbi long engaged in multifaith initiatives and a writer, I was prepared to stand in the present and help create a meaningful, stable future in our respective communities for the near term, which hopefully could withstand the seeming turbulence of the moment.

According to Anneke Kat, Program Associate and Walking the Walk Manager at the Interfaith Center, half of the applications arrived after the election and many on their accompanying personal essays wrote of ‘the times we live in’ which demand an urgent response. Some had been to Washington for the Women’s March the previous day, others joined the march in Philadelphia a few blocks from where Visionary Women was holding its first session. But all were present to turn their personal faith traditions, their ethical and moral sensibilities, into activism. 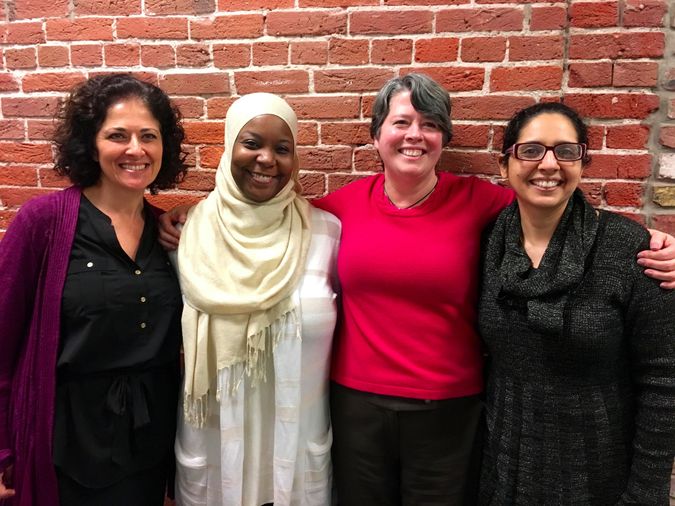 Creating Visionary Women was a team effort of the Interfaith Center staff. Kat explained that it is an outgrowth of the Center’s youth leadership development program, Walking the Walk. Twelve years ago community based interfaith work with teenagers through congregations barely existed. Inspired by Eboo Patel’s Interfaith Youth Corps, Marjorie Scharf, who worked in public health in Philadelphia for nearly three decades before joining the Interfaith Center in 2005, proposed engaging young people of diverse religious backgrounds through their congregations. In the course of her work with pregnant teens, cancer survivors, and people living with HIV, Scharf realized that faith manifested in different, often unpredictable ways yet all were strengthened by it.

The Interfaith Center creates programming in which people who would not normally seriously engage one another, do just that. Since its inception over 600 teens have been through Walking the Walk. Kat, in fact, is a Walking the Walk alumna.

Over the years, the mothers, grandmothers, aunts were curious as to the work that had so engaged their teens, and after several multigenerational retreats, the idea for a multigenerational multifaith program began to emerge. Together Kat, Diroff, Reverend Alison Cornish Inter-Seminary Initiative Coordinator at the Interfaith Center, and Scharf envisioned a multigenerational, multifaith program to capture and unify the power they believe is inherent in the activist and spiritual approaches and in each of the participants. Together they crafted a grant proposal which was accepted and Visionary Women became reality. Participants meet monthly on a Sunday afternoon at one of five different faith homes and often at a time holy in a particular faith tradition’s calendar. The May 7 session, for example, is expected to be held at a Mosque just prior to Ramadan.

Diroff, who began her work a decade ago while still a Seminarian, is passionate about the unique spirit and power of women gathering with women. She has encountered this first hand through the annual gathering of women clergy, through the gatherings of the Walking the Walk alumni and the significant women in their lives and through stories.

The stories women internalize, struggle with and emerge with, forms the core of their strength. There is the story of our Sikh presenter, a panelist at the January 22 opening of Visionary Women who was born in Amristar, a village in Northern India. Rather than marry, she quietly defied her father and chose to study for her Ph.D. in chemistry at the University of Delhi. She now teaches chemistry at Temple University and is the mother of two.

Our Muslim presenter serves as the Muslim Chaplain at University of Pennsylvania and is a social justice advocate who led a Black Lives Matter march in Philadelphia in the summer of 2016.

Rabbi Reba Carmel is a Reconstructionist rabbi in Philadelphia, a contributing writer to Jewish Currents as well as a freelance writer. She is among the 78 women in the first cohort of Visionary Women and has been involved in Multifaith work in her community and as a presenter in a variety of venues.