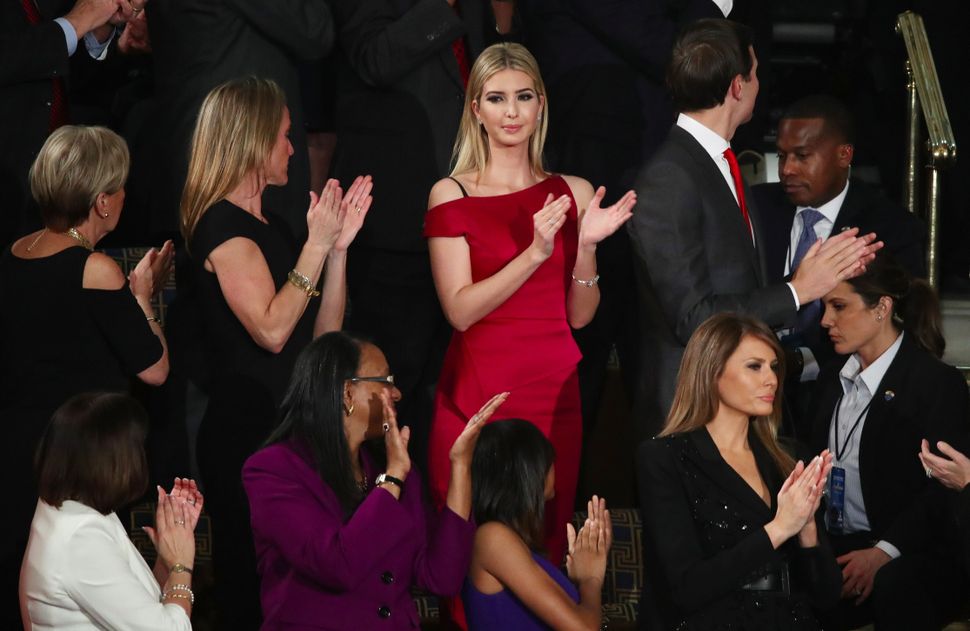 Of all the things the world gives us to panic about, the fact that Ivanka Trump’s bra strap was showing during President Trump’s speech to the joint session of Congress ranks near, or perhaps at, the bottom.

I can kind of see caring that the dress is French, and could see reading into that choice a Trumpian alliance with the European far-right, and a Trumpist choice to consider China dangerously foreign, but not France, where both stuff and people are concerned. But I can’t be bothered to care whether this was an actual bra strap, or part of the dress design, as if there’s some difference in modesty or event-appropriateness depending where, precisely, a strap is fixed.

Nor, for that matter, have I lost sleep over the existence of people who — for religious reasons, event-appropriateness reasons, or fashion reasons — did consider the dress a poor choice. I think she can wear what she feels like, but am not the knight to come to her defense over this non-issue.

The aspect of this story that does matter involves stepping beyond the ultra-specific case of Ivanka Trump, and looking at the more general question of women’s bodies, and clothing choices, in the public eye. There’s a seemingly eternal debate among self-identified feminists between those who think women should cover up, and those who think that, on the contrary, feminism means celebrating women’s right to “be sexual.” (This is how it’s put.) On the Pool, Zoë Beaty defended Emma Watson against the charge that a nipple-bearing Vanity Fair photo made Watson a hypocritical feminist. Beaty speaks up for women’s right “be feminist, and political, and sexual too.” Model Emily Ratajkowski made a similar point in a Lenny Letter piece: “Even if being sexualized by society’s gaze is demeaning, there must be a space where women can still be sexual when they choose to be.” Returning to Ivanka, the way to continue that line of argument would be to defend The Bra Strap as Ivanka’s right to be sexual, which… is that even what’s going on?

If I find this debate frustrating, it’s because both sides are missing the third way. Yes, a woman can be feminist in any outfit whatsoever. But there’s a problem with a definition of what it means for a woman to “be sexual” that’s limited to, or overly focused on, scantily-clad young models and actresses posing for photo shoots.

Yes, women should be able to pose as they wish without being shamed, whether they’re experiencing said posing as sexual self-expression, a business decision, or some mix thereof. Yes, being admired is a part of sexuality, female and otherwise. (Looking nice is also a part of non-sexual life, as with, say, needing to dress up because your father is about to pseudo-pivot in a speech.) What I have an issue with is referring to being professionally photographed while gorgeous as the be-all, end-all of female sexuality. To “be sexual,” as a woman, can just as easily refer to a woman attracting a less-conventional (or not male) gaze. Or — radical, I realize — to a woman setting aside any concerns about whether she herself is beautiful (and on that topic, see Heather Havrilesky’s latest), and instead being the one doing the looking.