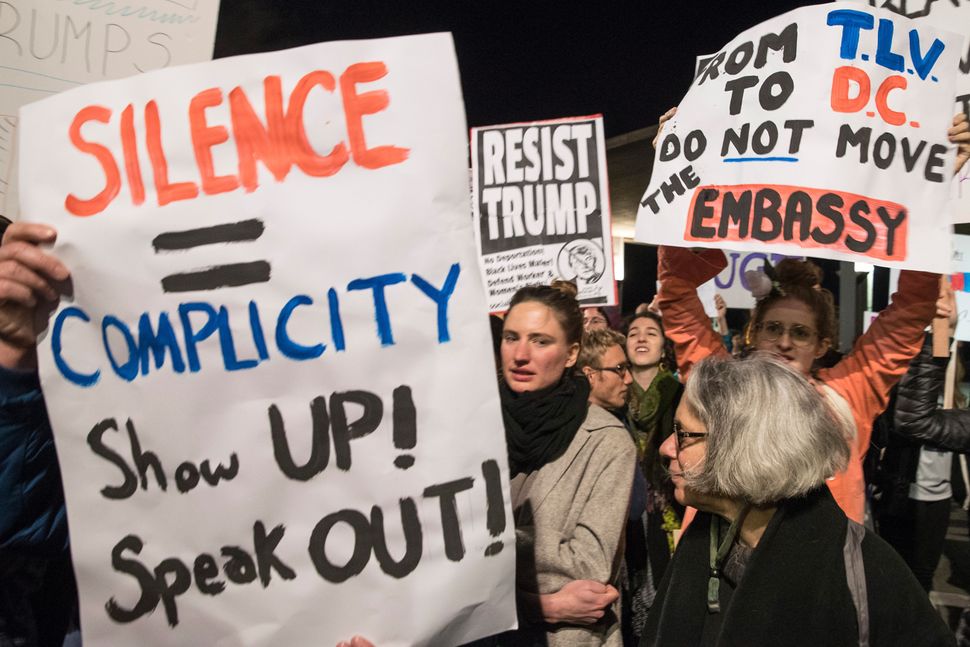 Donald Trump’s election to the presidency was a painful hit for many women, but also gave rise to one of the finest hours of American feminism. However, alongside the inspiring feminist resistance, a fierce controversy is arising these days regarding the boundaries of feminism; specifically, regarding the question whether the American feminist movement can encompass Zionist identity and ideology.

It is appropriate and correct that in an age of intersectional feminism, as feminists worldwide seek to address all forms of oppression against women, the Israeli-Palestinian conflict and its impact on the lives of women has taken a more central place on the agenda of the feminist movements in Israel and the United States. The bad news is that this topic can tear us apart, if we let it.

Of course, this controversy is familiar to Palestinian feminists, as well as to Jewish Israeli feminists, such as myself. In fact, we are deeply embedded in it.

All of us acknowledge the huge elephant in the room, namely the Occupation. Its presence in the room often curtails our determined efforts to collaborate on critical issues, such as violence against women, political representation, wage gaps and women’s welfare. Repeatedly, the Israeli feminist discourse reaches a boiling point in which women — both Palestinian and Jewish — feel that the room is too small to hold all of us together. In other words, the rising controversy in the American feminist movement, as well as the recent debates, are our most painful reality.

Therefore, and despite the painful internal, ideological disputes, Samah Salaime, a Palestinian Israeli feminist, and I found it extremely important to bring together both our voices. Doing so, we believe, is the best response to the hostile world we live in.

Both of us, Hamutal and I, know and acknowledge the painful dilemmas of Palestinian and Israeli — Muslim and Jewish — women. I am a third generation removed from the Nakba, the catastrophe inflicted on the Palestinian people following the war of 1948 and the establishment of the State of Israel. Hamutal is the daughter of Palmach fighters who were amongst the founders of the State of Israel.

I left Jerusalem to live in Wahat al-Salam Neve Shalom, the only Arab-Jewish village, in which Arab and Jewish families chose to live together and coexist. Hamutal remains in Jerusalem — a divided city that stands at the heart of the dispute as it is holy for all religions.

I am the director and founder of an Arab women’s organization, which aims at promoting Palestinian women’s status within the Arab culture and vis-à-vis Israeli institutions. Hamutal is the director of Israel’s only feminist fund.

The rising debate on Zionism and feminism drags our feminist struggle to the game that many men all over the world want women to play — the black-and-white, true-or-false, victim-and-victimizer.

The challenge we are facing as feminists is to create safe spaces for a political debate. We must combine politics of inclusion and care with an active resistance to all forms of oppression: gender-related, ethnic, racial, religious and political.

As I write those words, I feel the presence of my dear friend, Samah, a trusted mentor who taught me significant lessons about walking in the shoes of Palestinian women, whose reality I have not experienced. Nevertheless, my personal and collective histories are full of violence, oppression and silencing.

On the one hand, I am thrilled with the feminist movement’s uprising in the Trump era. On the other hand, as a feminist, I cannot accept limitations on the inclusiveness of the feminist movement. I find it hard to imagine a feminist IDF soldier who detains a Palestinian student at a checkpoint, and cannot understand the contradiction between her actions and her feminist agenda. For the young female combatant, entering the male dominated military space and dismantle the assumptions that women can’t fight like men is utterly feminist; yet I find it in complete contradiction to my basic feminist values.

Can I, a Palestinian woman, endorse it? Support it? Participate in any form of violent oppression of my people, my flesh and blood? Absolutely not!

Do I have a right to judge women who think differently than me? Also, no.

I respect and admire the current wave of intense political engagement by American women. However, like Hamutal, I don’t want to see this powerful, intersectional movement being dragged to the murky and troubled waters of the dispute over “Zionism”, especially when it carries such a precious promise of uniting women from all communities to achieve equality, justice and peace.

But we, feminists everywhere, simply cannot afford to walk away from this vital conversation, no matter how painful and uncomfortable it gets. Carving a shared feminist space often puts us at a difficult position with respect to our primordial tribal affiliations. If we strive to build effective women’s movements, we cannot escape the challenge of facing our communities with harsh truths about the exclusion of, discrimination against and oppression of women, all women.

American Zionism is an idea that encompasses the right of Jews for self-definition and living in peace, and this is, after all, exactly what Palestinians want for ourselves. Please understand that in the name of Zionism – even if it is not your Zionism – settlements are being built in the occupied territories, checkpoints are added and fences are erected. People are killed and injured almost every day in this vicious circle of violence. The military rule in the Occupied Territories prevents Palestinian women from going to the beach on a holiday, to drive to their college, or to sell their products across the separation wall. To be honest, it is not good enough for me if you say: “OK, I criticize Israel’s conduct in the Occupied Territories and its implications on the lives of Palestinian women and their families, but I am still an enthusiastic Zionist.” I expect a thorough debate that respects me as a woman; and I believe Hamutal feels the same way.

Feminism does not demand absolute consensus or certification; it demands equality, participation, respect, inclusion, social justice, and non-violent struggle. It involves cooperation for a better future. If you truly want all of those, do not let the Occupation occupy your movement; do not be dragged to this parade of condemnations and historical accounting.

Bringing Our Voices Together

We ask our American sisters: let us adopt inclusive practices. We, Jewish and Palestinian feminist activists, in Israel, Gaza and the West Bank, should be included in this discourse. Please do not conduct it over our heads. Let us all be part of this vital conversation.

In the meantime, we continue our daily activism; we may argue about everything, but we are right on purpose in the long journey of freeing half of the humanity from the control of the other half.

Samah Salaime is a social worker, community activist, and proud feminist. She is the founder of Arab Women in the Center (AWC), a non-for-profit organization which seeks to promote the status of women in the cities of Ramla, Lod, and Jaffa, while also working to combat gender-based violence against women, particularly in Arab society.