Whatever Happened To Unleavened Shirts? 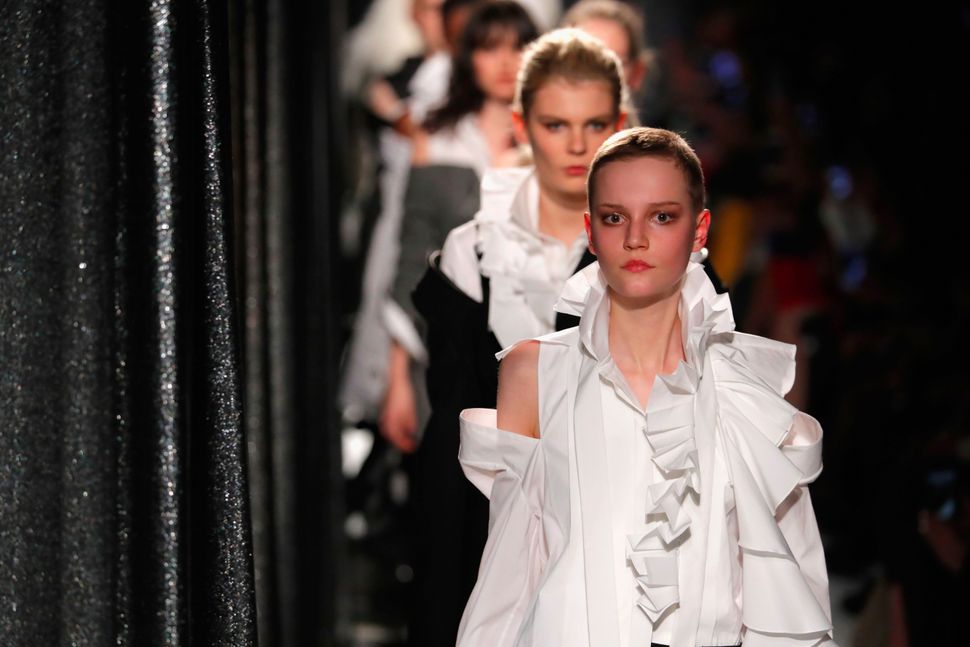 On Racked, Rebecca Jennings takes on the trend of the moment: deconstructed button-down shirts. Shirts so voluminous that they almost certainly qualify as chametz:

[A]bout six months ago… something very odd began happening to shirts. Brands you can’t afford — brands with names you probably don’t even know — started doing things to shirts that didn’t really need all that much improvement in the first place.

Things like slashing out the middle part of the arm for no apparent reason. Or turning these on-the-shoulder shirts into off-the-shoulder shirts by pairing up the buttons wrong. Or [adding so many ruffles](https://www.net-a-porter.com/us/en/product/847848?cm_mmc=ProductSearchPLA--US--Tops-Clothing-Self-Portrait-Google&cm_mmc=Google-ProductSearch-US—c--NAP_EN_US_PLA--NAP_US_GS_Designers+(Low “adding so many ruffles”)—Designers--__pla-120272309075_AM&gclid=CI_XqMSLi9MCFYmLswodNWsGuw&siteID=TnL5HPStwNw-oCfDoaAF0qLYnabtDsMUyQ&Skimlinks.com=Skimlinks.com) that it stops being a shirt altogether and just becomes the bottom half of a flamenco dancer’s dress that’s made out of Brooks Brothers fabric and costs $650._

It’s hard for me to explain why I found Jennings’s essay (and its copious, sometimes humorous, visual examples) so captivating. Maybe it’s because I’d seen the word “shirting” in a store window and realized that while the word was new to me, the concept was not: Ever since the off-the-shoulder trend of last summer, old-school (that is, torso-covering, ruffle-free, bra-compatible) shirts have been harder to come by. But I think it’s more about what the piece winds up hinting at about fashion trends as a phenomenon, as versus just this moment’s puffy-blouse craze.

While I confess I think some of the new shirts themselves are lovely, I cringe whenever a trend crosses the threshold from a option for those who seek it out, to the default clothing available. What if you want (or, for practical purposes, need) a button-down shirt that could plausibly be worn under a sweater? (Or jeans without pre-ripped knee?) Certain trends make me wonder whether the point is the inaccessibility that comes with impracticality. And yet they might, like so many trends, simply make their way into ordinary wardrobes for years to come. I mean, when I saw that the romper had arrived as clothing for adults, I had my doubts. And yet today, on the first warm-enough one of the season, here I am, wearing one.

Whatever Happened To Unleavened Shirts?