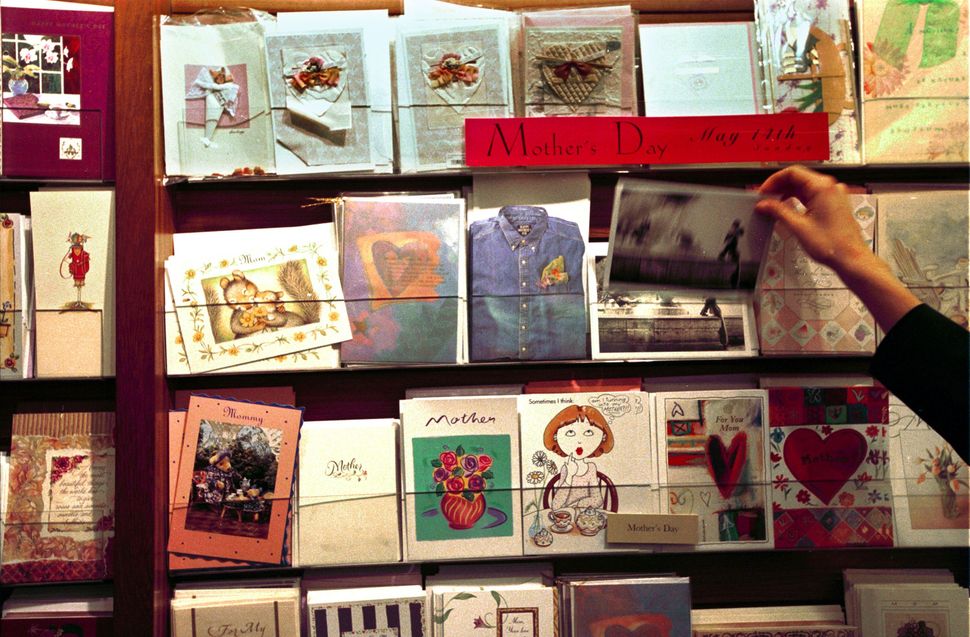 “We’re all mothers here in some way or another,” said a 50-something woman in writing class as we discussed some aspect of motherhood in a book. “No, we’re not,” I thought, but I kept my mouth shut, not wanting to hurt her feelings about not having children.

Sure enough, the rest of the women in the class nodded, and the sole man smiled to himself.

Come Mother’s Day, it is customary for hostesses and doormen to smile at any woman above the age of what? eighteen? twenty-five? and say, “Happy Mother’s Day!”

We’re all mothers here, right? No, we are not, and to pretend otherwise takes away from those of us who are.

Here’s the thing: You’re not a mother if you have two nieces and five dogs and have given birth to a novel. To be a mother, you need not have given birth, but you need to have taken on the responsibility of nurturing another human being for the rest of your life. Yep, for the rest of your life; the expectations of a mother never end, even when the children are adults.

To be a mother, you need to have taken on what a friend of mine calls “the sheer eternity of it.” The night that never ends when your toddler has an ear infection, and you discover that sleep interrupted every 90 minutes is a greater torture than not getting any sleep at all. Schlepping to the office the following morning is the ultimate “working mother” experience. Motherhood is studying up on convection to help your 5th grader with her science fair project. It’s yelling at your 7th grader to glue the cut-outs on his history fair board straight so it won’t be a sloppy presentation. It’s getting up every morning to fix breakfast and pack lunches, and worrying about dinner every night. It’s driving across town to watch basketball games you don’t care about. It’s putting up with your teenager’s wrath and making him do his homework even when he hates you for it. It’s giving up on a trip that you looked forward to because your son has a pinched nerve.

But, it’s also blowing bubbles on your baby’s soft tummy until she squeals, snuggling with three deliciously smelling bodies after baths to read a bedtime story (and reading it for the umpteenth time!), or bursting with pride when your son wins a science fair medal. It is telling stories of your life and stories of your children’s lives to their rapt attention; it’s singing silly folk songs full throttle at the Seder table.

Motherhood is in the doing: the feeding, the taking care, the teaching. Motherhood is also in how you comport yourself. You are closely watched and emulated: Not until my three-year-old yelled back, “One moment, please!” did I realize that that’s what I always said to him.

What then, one might interject, about women like a friend of mine who, in the 1960s, had to give up her baby, and didn’t find him again until he was in his thirties? Is she a mother? A biological one yes, of course, but she is painfully aware that she missed out on all the ups and downs, the hugs and the fights, the late nights and the snuggly mornings, and thirty-some Mother’s Days.

And what about women, like another friend of mine, who chose not to have children? Why call her something she did not want to be? Or what about those, who did want to but for whom, for whatever reason, motherhood did not pan out? So, please, if we’re going to have a day to celebrate mothers, let it be about motherhood and not womanhood. Equating the two is an affront, not only to mothers but also to those who aren’t, whether by choice or not. Let’s celebrate weathering the “sheer eternity of it.”

Annette Gendler is the author of Jumping Over Shadows, the true story of a German-Jewish love that overcame the burdens of the past. She lives in Chicago with her family.