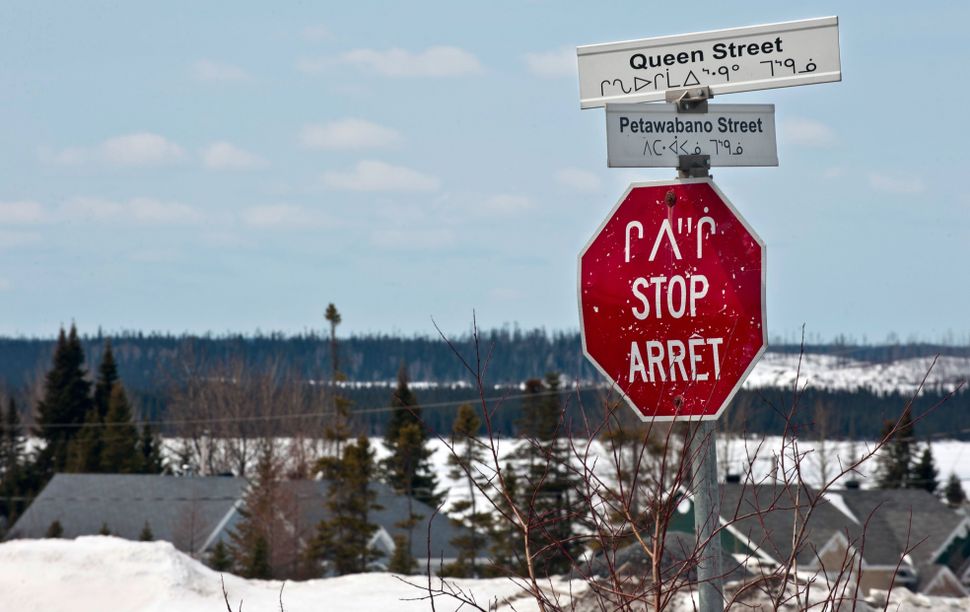 Signs in the Cree Nation of Mistassini, Quebec. Image by Getty Images

In the Canadian Jewish News, Janice Arnold shares the story of Nakuset, an indigenous Canadian (Cree) woman adopted by Montreal Jews. Nakuset (one name only) is executive director of the Native Women’s Shelter of Montreal, spoke at Temple Emanu-El-Beth Sholom in Westmount, Quebec on April 30th at an event called “‘Imagining Tomorrow: Lessons from Indigenous Youth.’” Her adoption took place within the context of a broader Canadian program from the 1960s to the 1980s, in which the Canadian government took children from impoverished First Nations families. The program sounds troubling to say the least:

The kids were placed with non-indigenous adoptive or foster parents, often far away. The result, they say, was a loss of cultural identity and lifelong psychological harm. [….] [Nakuset] says that although her parents meant well, it was not a happy experience and, as soon as she turned 18, she left that home and eventually went on to rediscover her own identity and people.

Nakuset’s experiences speak to the complexities of Canadian indigenous and Jewish identity:

JFS [Jewish Family Services] advised her adoptive parents not to reveal her origin, to change her name and pretend she was Jewish by birth.

“They said, ‘This would be best for her’; this was a colonial idea, to erase my roots so that I would grow up as a nice Jewish girl,” she said.

But her looks set her apart at school and camp. “My parents said (to) tell them I’m Israeli; they thought they were doing a good thing.”

Nakuset did form a loving and close relationship with her adoptive grandmother, and the older woman was the one who helped her reconnect with her birth family and regain her indigenous status.

A deeply upsetting story, but an important one.