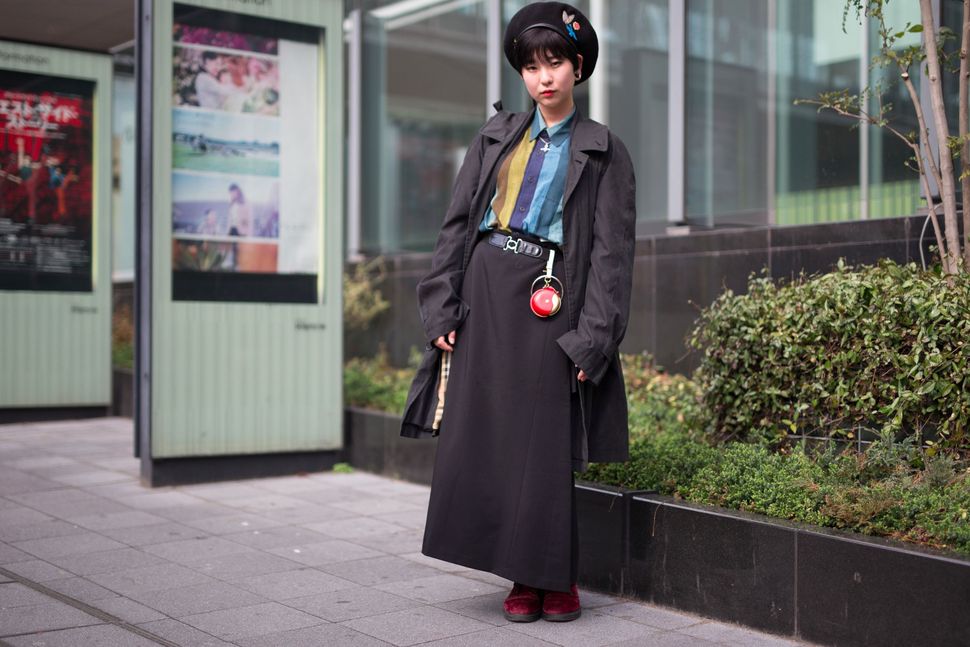 A guest at Tokyo Fashion Week Image by Getty Images

Over at The Cut, Lilit Marcus describes a very specific fashion and identity conundrum: because she’s got a “Hebrew name” and is “drawn to things that might get defined as conservative — below-the-knee dresses, cardigans buttoned all the way up, tights in nearly every color of the rainbow, and especially those tissue-thin turtlenecks from J.Crew,” she goes through life frum until proven otherwise. She opens with an anecdote of a colleague mistakenly assuming she was observant, but explains that there’s another explanation for her attire:

Rather than dressing according to religious guidelines, I’m thinking about comfort and practicality — as an inveterate klutz, I need something I can fall down in without anyone knowing what color underwear I have on that day. It’s also nice to know I can take my sweater off in the middle of an open newsroom and not have to worry about readjusting my boobs. Maybe opting to aggressively cover up means that I’m frumpy — but if the president of the United States “hates frumpy women,” I’m more than happy to stay off of his radar.

The phenomenon of long skirts making secular Jewish women read as Orthodox is not unique to Marcus. It’s one I can speak to from personal and anecdotal experience. (It’s internalized at this point — I wore a long, loose jumpsuit with a turtleneck today, and even I wondered about my own level of religiosity when I caught my reflection.) See also: Emily Barton’s great essay on inadvertently passing as Hasidic in Williamsburg. It is, I suspect, a thing.