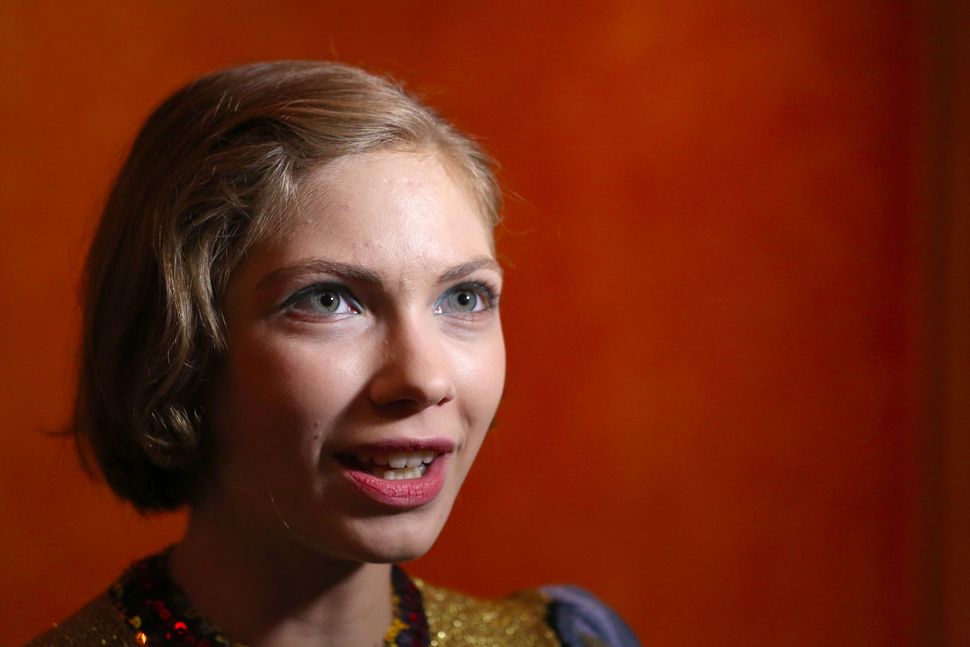 Tavi Gevinson, like all women, was once a teenager. Image by Getty Images

For a while now, there’s been a spate of think-pieces about the underestimated teenage girl. This came up when Teen Vogue became a strong (albeit adult-run) voice of opposition to the Trump administration. The teen girl (or, as with the Fearless Girl statue or Chelsea Clinton’s new children’s book, the young girl) has become a symbol — the symbol — of feminist hope. (Was the possibility of a grown woman as great feminist hope dashed when Hillary Clinton — icon of sensible adult womanhood — lost the presidential election to Donald Trump? Is that what’s going on?) The wave of progressive interest in teen girlhood has made some grown women uneasy. Is the trend a case of teenage girls finally getting the respect they’ve long been withheld? Or is it yet another example of young people being condescended to, while adult women are made to feel less-than for having aged past 19?

Josephine Livingstone’s (brilliant) New Republic piece, “Grow Up: Why adult women — and women’s media — should reconsider their cultural infatuation with teenage girls,” tackles just this issue. Livingstone argues that teenage girls are indeed making their mark on the world, but that teen-centricity does grown women no favors:

Fetishization of “teen girl” cultural value has led to an unnerving and ever-increasing sense that a teen girl is somebody an adult woman might want to be. Mirroring this insult to teen girls’ experience is the implication that adult women cannot ever become full adults. This insults all of us, suggesting that personhood for women lies in some fantasy infantile state: never a child, never an adult.

Livingstone makes an especially spot-on point about the reception of Tavi Gevinson’s publication, Rookie: “[I]n the maddening, recursive way that the media deals with young women, Rookie’s success gets looped back into the original narrative of Gevinson’s exceptional youth at the time she first became well-known.” She also points out — and this is so important — that adult notions of teenage life don’t reflect “the experience of teenagers themselves.”

Livingstone claims that teen girls’ appeal stems from their association with “cool,” which I think is part of it, but not the main issue. The reason “[i]nfluencer marketing is entirely defined by young women and their looks, their bodies” — which, yes — is not, I don’t think, that “marketing professionals exploit teen girls by using their exuberance to sell products.” Unfortunately, icons of beauty aimed at men and women alike tend to be teen girls. (Livingstone gets at this, indirectly, when she writes of “the adult woman” seeking “the lost nubile beauty that she left behind at cheerleading tryouts.”) According to a survey by labor advocacy group the Model Alliance, most fashion models begin their careers aged 13-16; the vast majority do so between 13 and 20. Even ordinary-looking young girls (such as my former 14-year-old self) can get incessant and very much unsolicited attention from grown men. Meanwhile, by the time a woman has exited her teens, she’s getting the message from the culture that she’s aging.

The teen girl story sells not (just) because teenage girls are thought to be especially on-trend, but because everyone evidently clicks on images of them, or even — as with teen jargon — the mere evocation of them. Meanwhile, feminist concerns (or women’s achievements) that can’t be illustrated with a photo of an attractive teen girl or very young woman don’t get the coverage they deserve. Maybe what’s happened is, grown women are cynically playing the system, tacking on a “teen” façade, in the hopes that someone will listen to what they have to say.