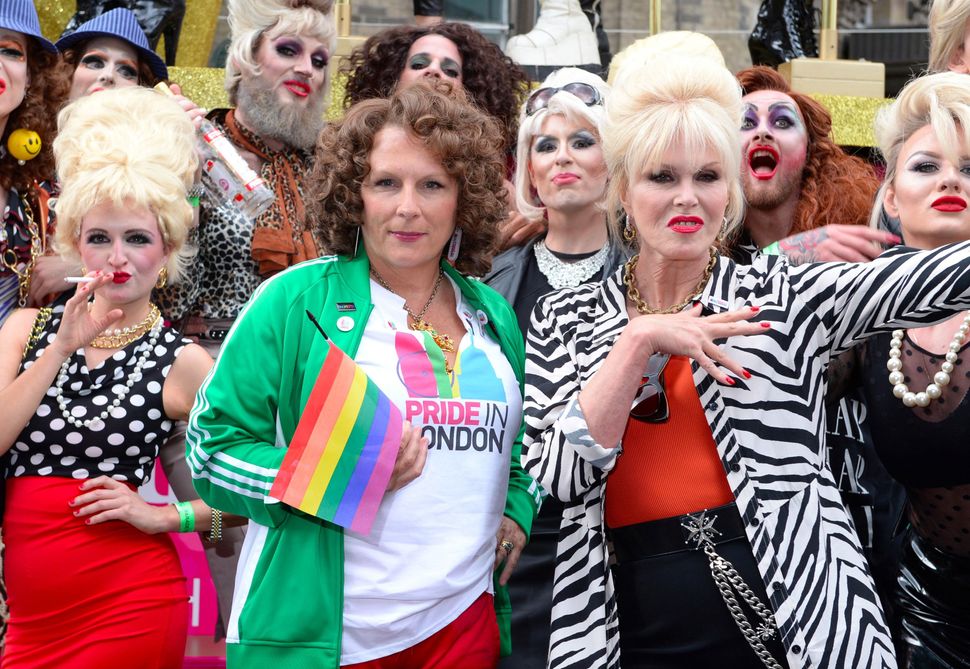 Jennifer Saunders and Joanna Lumley, in character and with impersonators, at 2016 London Pride Image by Getty Images

Before “Broad City,” before “Sex And The City,” a debauched, joyous, complicated, and above all hilarious female friendship made it onscreen. I more or less grew up with “Absolutely Fabulous,” identifying generationally with staid daughter Saffy, but on a deeper level with mom (and protagonist) Edina. Edina Monsoon (played by creator and writer Jennifer Saunders) and friend Patsy Stone (Joanna Lumley) are children of the late 1960s trying to cope in the health-conscious 1990s and beyond. The sitcom follows them on a never-ending quest to have fun, as well as their attempts to move from the periphery of the fashion and celebrity world to its center. They see themselves as very glamorous and connected, but are not infrequently partying alone together at home, which they seem to enjoy just fine. It’s a show with lots of incredible physical comedy, the all-time best of which is when Patsy and Edina make a first-ever visit to a supermarket. (They had gotten groceries delivered from an upscale department store, but an accountant has told Edina she needs to cut back.) Not knowing how the shopping carts work, rather than pulling one out, Patsy pushes a train with all of them.

The 2016 movie was delightful, but is best appreciated after spending time with the original show itself, which Netflix has made possible. And… it holds up surprisingly well! I’d expected the cultural references not to, but minimalism is still a thing. As are high-fashion takes on the New Age hippie lifestyle.

Sleepy re-watching led to sleepier Googling (yes, that was a young Idris Elba playing a sex worker Patsy had hired), until I stumbled upon something incredible (or new to me, at any rate): Edina Monsoon was partly based on a real woman. A real Jewish woman.

Public relations executive Lynne Franks has, in recent years, come around In 2011, she wrote in The Telegraph,

“With time and hindsight, I have come to stop taking the programme so personally,” but was clear that this had not been easy. She wrote that she “had been friends with Ruby Wax (who edited it), not to mention Jennifer and Dawn French, who would come to my parties and visit my house.” Franks’s initial encounter with the show sounds plenty surreal:

One night I was invited to a dinner by the editor of Vogue. The event was at San Lorenzo’s, a favourite haunt of Diana, Princess of Wales. I arrived to find a gaggle of fashionistas in the bar, huddled around a television set. You might think this bizarre – who watches the TV when asked to a dinner by the editor of Vogue? – but you cannot begin to imagine how peculiar it must have felt for me. Because, much like the rest of the country, they were watching a new comedy programme, and the lead character – the one everyone found so funny – had been based on me.

Her name was Edina Monsoon (or Eddy) and the show was Absolutely Fabulous (or Ab Fab, as we fondly call it now). Eddy, as played by Jennifer Saunders, was a larger-than-life Buddhist who ran a PR company – but it is there that the real-life comparisons end.

Saffy, meanwhile, may have been inspired by Franks’s son, comedian Josh Howie. Unlike Saffy, according to a 2008 Evening Standard profine, “Josh did, finally, rebel.” How, you may ask? “[B]y embracing his Jewish roots and training as a rabbi in Jerusalem — until he was caught with a naked Catholic girl and expelled.”

And in case you were wondering, there’s also a secret Jewish history to Patsy Stone, but it’s more of a stretch: While the character’s obvious (and, in the show, remarked-upon) physical resemblance is to Ivana Trump, one of the floated-around inspirations for the character was Lauretta Sullivan Feldman, who, while not Jewish, seems to have had a disapproving Jewish mother-in-law. A deeper dig reveals that Joanna Lumley, the actress – the icon – who plays Patsy, opposes cultural boycotts of Israel. All of which is a roundabout way of say, Eddy’s the maybe-Jewish one, and by extension, the characters playing her mother and children. (Along with Saffron, there’s a barely-seen son, Serge.)

Does this change everything? Do I now have to ponder whether one of my favorite characters of all time is a Jewish caricature? (No; more on that in a moment.) Does it mitigate that possibility – and I rather think it does – that script editor Ruby Wax, who also made occasional appearances on the show, is Jewish?

In 2016, Tanya Gold made the case that the “Absolutely Fabulous” viewer “was invited to laugh only at female failure.” Gold found the show anti-woman, but more specifically, insensitive to the specific Jewish woman who inspired Edina Monsoon:

Eddy, who is based upon the Jewish fashion PR Lynne Franks, is a wonderful subject for tragedy; and a complex one for comedy. [….] Eddy is, like Franks was, rich and successful — Franks ran her own business when few women did — but you never see that on screen; you never see Eddy doing anything functional. You see only the chaos that she lives in; the fear she has of herself; the self-disgust that is the comic engine of “Ab Fab.” Eddy loathes her body — its bumps, its excrescences, its leaks — with a terror and commitment which, while no doubt familiar to female viewers who turn to the Daily Mail for similar torment, is pitiless. And this is why “Ab Fab” was always a sketch and never a great situational comedy — Eddy is the butt of the joke. Always. Unless it is Patsy.

I see what Gold was getting at when she wrote, “Jennifer Saunders has said that ‘Ab Fab’ is really a comedy about friendship, which I imagine sits ill with Lynne Franks, who was once, apparently, her friend.” But if Franks herself is not offended – not now, at any rate – I see little to be gained by being offended on her behalf. (In that same 2011 piece, Franks wrote that she now regrets not agreeing to appear on the show.) As for me personally, I’m unable to feel anything but pride, as a Jewish woman, at the possibility that Edina Monsoon is a little bit Jewish.

Whether Edina is awful or wonderful – laughed at or with – is not, I don’t think, so readily resolved. In part because it’s a farce without much attention paid to consistency, the show doesn’t give easy answers about how the audience should feel about the characters. Are Patsy and Edina idle, or have they just reached the pinnacle of their careers (in fashion magazines and PR, respectively), such that they get paid enormous sums for just sort of existing? Are they a non-traditional household (straight best friends who often cohabit) to be admired, or a toxic friendship? Is uptight, conservative (but politically progressive) Saffy the show’s voice of reason, or an example of fun-negativity?

Edina isn’t stereotypically Jewish in any way that jumps out. The character and actress aren’t Jewish. The most you could say is that Edina is the Rhoda Morgenstern to Patsy’s Mary Richards. But… Edina’s the protagonist! The “fat friend” character is hardly the sidekick. (Also hardly fat, but that’s another story.) Yes, men prefer former model Patsy, but — as Edina’s mother, played by June Whitfield, snarks in an early episode — even though Patsy was always “the one with the boys,” it’s Edina with two (ex-) husbands and children. More to the point: Without ever becoming a didactic show about the importance of centering the experiences of middle-aged and older women, the show just did this. Men — straight men especially — are near-absent from the show’s universe, swinging by every so often for Patsy’s amusement.

All the characters – yes, even Saffy – say things that would, by contemporary standards, seem a bit problematic. But so, too, by the standards of 20 years ago. It’s hard to see how a show that takes place largely around a family’s kitchen table would avoid this, and doubtful whether one should.