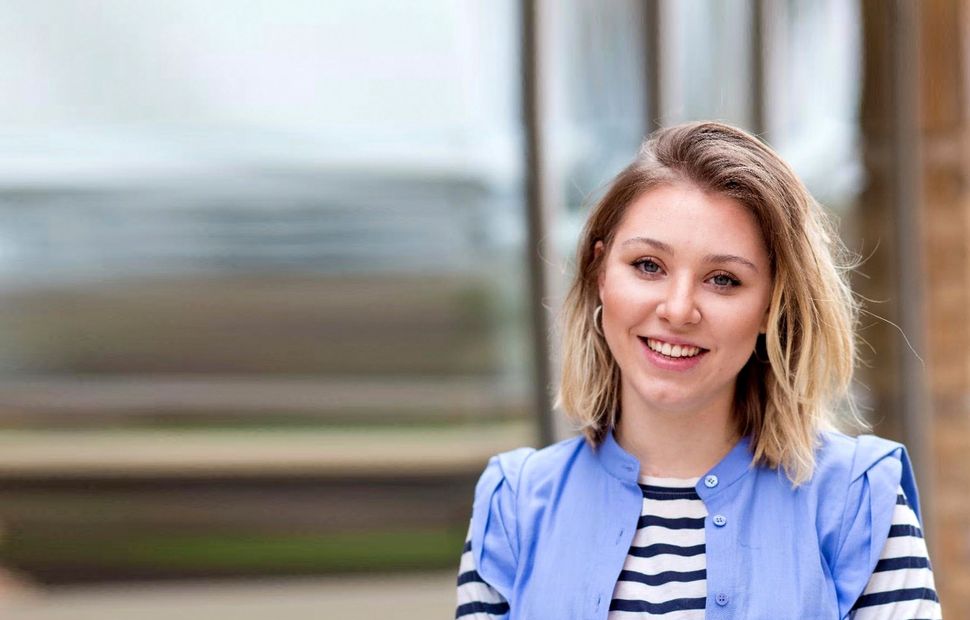 You wouldn’t believe she’s only 20.

With no film schooling or experience, Baltimore native Miryam Rabinowitz has thrown herself into a film project that tells the story of sexual abuse — or rather, its lonely, complex aftermath.

“Still Feeling” tells the story of Yuval Goldenberg, a young woman who was abused during her childhood in an Israeli national religious community. Goldenberg, no longer Orthodox, is a singer and composer now. With an earthy voice, standing rather awkwardly, eyes half-closed, she lets song tell her pain.

Rabinowitz is a survivor of sexual abuse herself — and a graduate of the ultra-Orthodox Bais Yaakov girls school system.

“Most people around me don’t acknowledge the fact that I was abused at all,” she told me in an interview. “I have close friends who don’t acknowledge it. My film trailer was the first time I said it publicly. I’m making this documentary for my friends and family to be able to say, ‘This is for you to know how to talk about it with me.’

“I know it’s hard for people to process. When someone says they were raped by a family member, you’ll never be able to understand what that feels like, but you do understand that basic feeling of shame and suffering. It’s by empathy — through art and music — that we can come to understand another’s pain, rather than through intellectual understanding.”

In her forthcoming film, shot mostly in Tel Aviv, Rabinowitz shows Goldenberg talking about her music and her dissociation, as she bounces between her Orthodox family and her artist friends, many of whom are also survivors of abuse.

“Don’t assume that people are normal and happy,” Rabinowitz said. “My friend and I went along the same path. We wore the same school uniform. I went home and I was abused. She went home and she wasn’t. We lived parallel lives, except mine was covered in soot. I looked the same, but I may not have acted the same. Understand that I was in an upside-down world.”

Her film, now in postproduction, is a window into this world of childhood trauma.

“Where I come from, it’s really stuffed under the rug, though it’s starting to change,” she said matter-of-factly. Her wide, blue eyes stared straight ahead. She cited the case of another young woman in her community who accused her father of molesting her. “The whole community shut her up; they told her to leave in silence, so she left for Israel,” Rabinowitz said. “People say, ‘She’s crazy’; no one believed her. Yeah, she’s crazy. If your father is lying on top of you every night, suffocating you and raping you, of course you’re crazy. When you survive abuse, there’s always someone else in your head. You see it in Yuval.”

Rabinowitz didn’t go into too much detail about her own story, but years of abuse, and her subsequent turn to substance abuse, landed her in Retorno, an Israeli religious drug rehab center. When she returned to the States, “straightened out” and “frum again,” her past as a vulnerable young woman continued to haunt her. When she was 18, a community member drove her home from an event and said he had to stop at his house to “get something,” inviting her in.

“I was 18 years old, and he was 70 years old, a very prominent person in the community,” she said. “He brought me to his house, and he did something to me.” After pausing, she continued, “When he drove me home, he said, ‘Wow, the things you make me do…. ’ I told a domestic abuse organization about what happened, and they told me, ‘If you go to the police, you have nothing on him; no one will believe you, and he will bury you.’”

That was the moment that she realized something needs to change. “I would be speaking to religious kids from different communities, from around the world, and everyone had a story, everyone knows someone who is affected by this,” she said. “We need everyone to finally be open and connect all those stories to make a difference.”

She rattles off harrowing story after story, name after name, with unnerving poise.

“My focus is not on the perpetrators. So instead I’ve turned to film to tell my story. My goal is to use Yuval’s story to de-stigmatize the issue of child sexual abuse. I hope to motivate people who have not experienced this trauma to take action to help victims.”