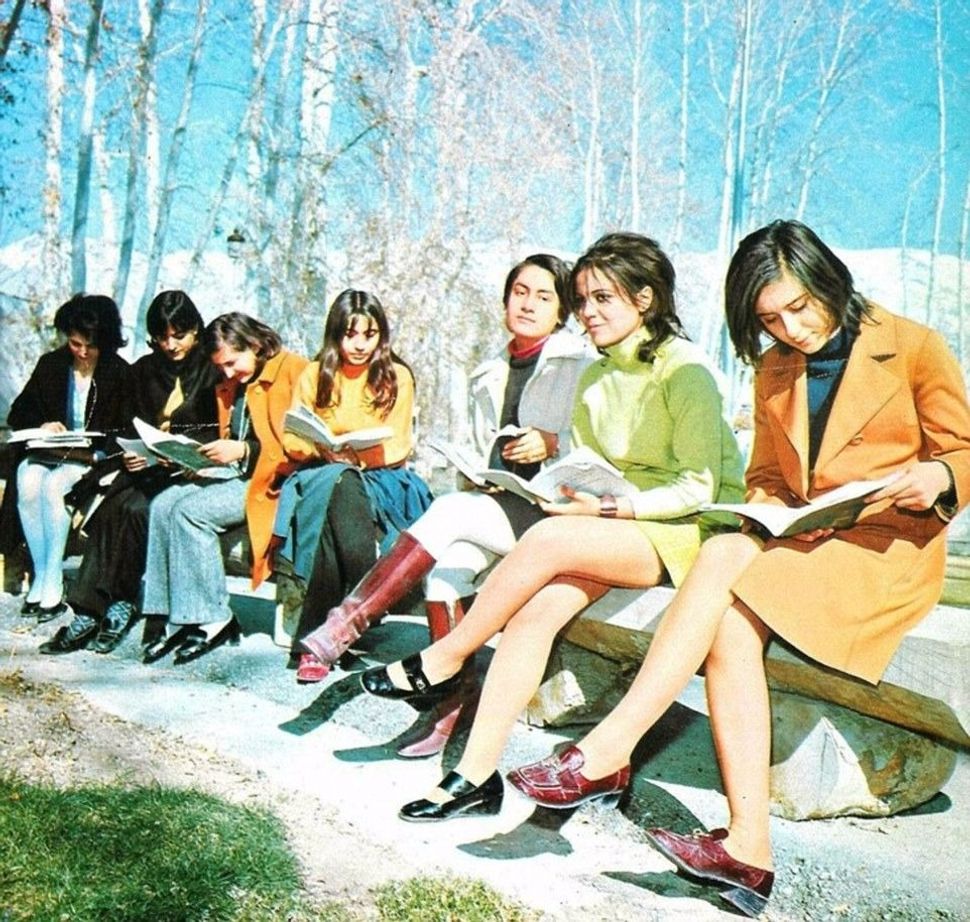 College students in Iran in the 1970’s Image by Wikimedia

“It reminded me of driving on Wilshire Boulevard in Beverly Hills,” my aunt said. Big grassy medians, flawless pavement. “I knew we were out of Turkey the instant our van hit that beautiful Iranian road.”

After a few semesters at UC Davis, my Los Angeles-raised aunt made her way to London in 1972. She backpacked around Europe, stopping in Copenhagen, where after a whirlwind romance, she met another Los Angeles-raised Jew who married her and convinced her to drive the Hippie Trail, overland from Holland to Nepal, by way of VW bus.

The trip did not go smoothly.

In Bavaria, their van broke down for the first time. While waiting for help, my aunt and her husband wandered into a local pub. Two young German men peppered my aunt with sneering questions: “Where are you from?” America was not a satisfactory answer. “No, where are you really from? What are you?” One of the men grabbed my aunt’s breast and muttered something about Juden.

Turkey was worse. A vendor in the Istanbul open-air market hadn’t appreciated how my aunt ignored him; he grabbed her arm and said, “Hey, you, Jew lady!” then made a beak-like gesture at his nose. The crowd around them laughed uproariously. In the Turkish countryside, they passed through a small village. Their van was pelted with rocks and chased by a mob. In a separate incident, my aunt’s husband asked a local for directions. The local responded by spitting in his face. The roads were ugly and rough, nausea-inducing for anyone, but especially difficult for my aunt, who was six months pregnant.

In Khoramdareh, Iran, something went wrong, yet again, with the bus. Their battered vehicle puttered to stop. Almost immediately, they were surrounded by a group of curious children. A man emerged from a tea shop and offered them use of his restroom. Locals propped the hood open and peered inside, trying their best to help.

Iran must be the opposite of Turkey, my aunt thought.

Two brothers appeared. On summer break from university in California, they spoke excellent English and told my aunt and her husband to continue to Tehran, where it would be easier to repair the van. They offered their parents’ address. “Tell them we sent you,” they said. The van was given a temporary fix, enough to get them to Tehran, and they set off.

In the ritzy suburban neighborhood of Tehran Noh, my aunt and her husband found the address of the brothers’ parents: a huge estate, surrounded by high walls. They were greeted warmly by their hosts, a doctor and his wife, and invited to park their van in the garden.

The garden was well-manicured: lush green grass, roses. For my aunt, twenty-one years old, pregnant, and far from home, this Western-style garden of familiar flowers was a comforting sight.

They stayed four days, my aunt’s husband heading into downtown Tehran every morning with the doctor to search for van parts. My aunt spent her time in the garden, reading. Sometimes, she stood outside the gate, watching the Tehran girls: Skirts, nylons, high heels.

One night, the hosts asked about their guests’ ethnic background.

“My wife and I are Jewish,” my aunt’s husband said. The doctor and his wife nodded and soon after, made their way to bed.

In the morning, on the gold tray, the servant girl presented them grass clippings, horse hair, and table scraps from the previous night’s dinner (leftover chicken on gnawed bone, congealed fat.)

My aunt and her husband left without saying goodbye.

They continued to Mashad, where the market stalls held scribes who wrote letters and filled out forms for the illiterate, businessmen doing computations on abacus, lamb kebabs roasting over fires.

As their van lurched over the border, onto the unpaved road of Afghanistan, my aunt looked over her shoulder for the last time at Iran, wishing for more of that beautiful Iranian road.