Why This Orthodox Layering Trend Has To Stop 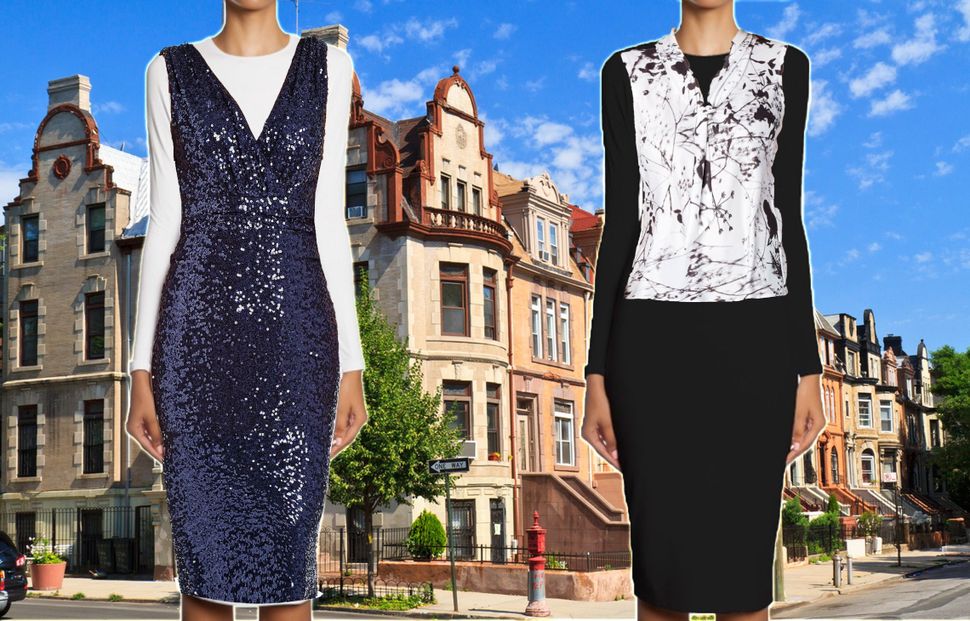 Examples of what not to wear. Image by Laura E. Adkins

Perhaps no other garment defines religious Jewish women as much as the shell — the tightly-fitting layering top used to make immodest clothes modest. And no other brand has come to personify the shell as much as the Turkish brand Kiki Riki.

Kiki Riki has become so synonymous with the layering shell, that many frum women have taken to calling all shells, regardless of the brand, “Kiki Rikis.”

But shells, as they stand today, are the absolute worst.

Made of polyester and spandex, shells generally look cheap, and make everything you put on top of it look cheap. True, there are cotton versions available, but the spandex inside still commits a cardinal style sin: It makes everyone’s arms (including fit women) look like ten-pounds of sausage meat stuffed into a five-pound casing.

And the Kiki Riki label is far from “modest.” Kiki Riki was founded in 1979 as a Turkish-based textile manufacturing business. It soon became known for affordable yet trendy styles, with designs that veered toward the sexy, the revealing and the skintight. These on-trend pieces can be found in Forever21, and based off the current selection available on the site, one wouldn’t be wrong in thinking that the clothes look trashy, albeit in a Kylie Jenner, Instagram-friendly way.

Kiki Riki’s skintight clothing naturally led to the creation of skintight basics — long to three-quarter sleeve tops that at first only came in black and white. And it’s these skin-tight tops that frum women gravitate towards like bees to pollen, as an undershirt to convert revealing tops into modest ones.

Kiki Riki’s affordable price was also part of the appeal. True, Wolford has offered tight-fitting bodysuits for decades. But Wolford is expensive. And because shells wear out easily, people weren’t willing to throw down $300 every time they needed to replace their bodysuit.

The ubiquity of shells began in the early to mid-aughts, when fashion was still dictated by a small cabal of high fashion designers and modesty was out of style. For the average Orthodox woman who wanted to abide by the Jewish laws of modesty, an excursion to the mall was an exercise in futility — the skirts, if there were any, were too short; sleeves, if there were any, barely covered the elbow.

Nowadays, every Orthodox clothing store worth their salt will have at least one brand of shell. And, in recent years, Orthodox women have created their own shell brands, like Esteez and the in-house label at the popular Shell Station, Pea Bee & Jae.

Once shells became not just a staple, but a modest necessity, a funny thing happened: Frum women started wearing shells not just to cover up what their favorite outfits exposed, but as style statements in their own right. And Orthodox women began buying patterned or colored sleeveless tops to wear over their shells.

The look soon became so common that retail stores catering to Orthodox women began selling sleeveless tops and tanks alongside their selection of shells, so a shopper could easily find the perfect combination of shell and tank-top in-store.

But the popularity of shells didn’t stop there. They were soon seen under gowns at weddings. In a world where strapless gowns are the norm, evening gown shopping for Orthodox women has always been notoriously difficult. And when shells became popular, even stylish, it was suddenly acceptable to “tznius-ify” (make modest) these immodest gowns with shells. In response, “shell-dyeing” services soon became available, and stores began stocking colored shells in every imaginable shade to match just about any gown.

To this day, the shell-under-a-sleeveless-top trend continues to reign supreme. It’s a style that’s so pervasive that it’s one easy way to identify a woman as being Orthodox.

This is because it is, in my opinion, impossible to look good in a shell. It’s not stylish, it’s not flattering and it cheapens every look. It’s rarely, if ever, used with intention, beyond the intention of making something modest. It’s a lazy approach to dressing, where creativity in dressing falls by the wayside.

Wearing a shell makes dressing modestly a mechanical, mindless process, and sucks the joy out of getting dressed. And it’s unfortunate, because the development of a creative style is one of the few physical benefits of dressing modestly. Having to dress modestly forces one to think outside of the box in an attempt to make the outfit work well together, maybe even make an unforgettable style statement. Why ruin that with a shell?

Why This Orthodox Layering Trend Has To Stop