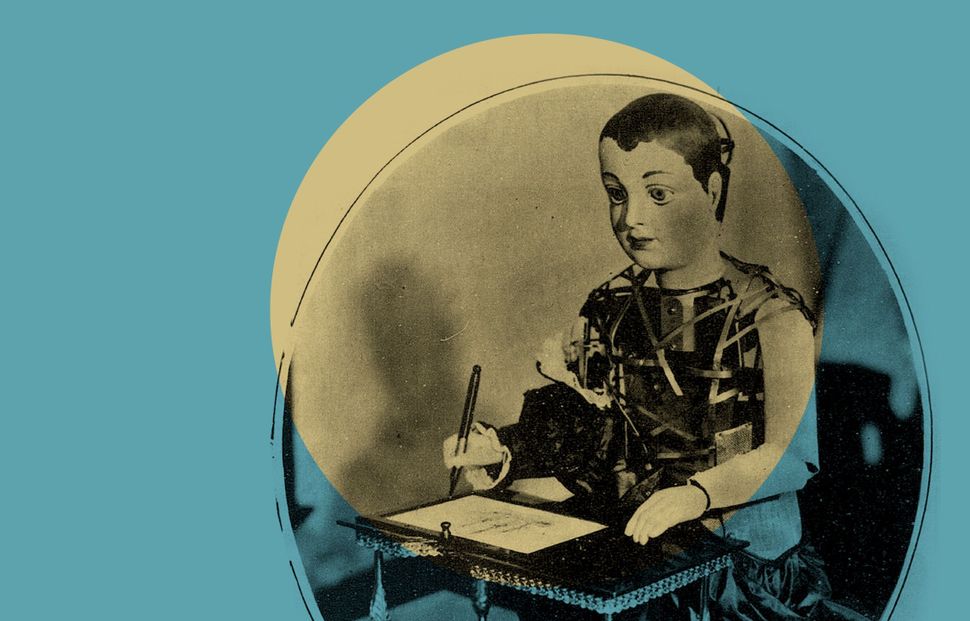 The waking fantasy of the ages is that some external force will take care of all our needs. And, for those who rightly eschew slavery in all its forms, that has meant hoping for a scientific invention or dreaming of some magical intervention.

But there’s a catch.

As a writer, I yearn for an automatic machine — like the 1932 writing doll on this page — that can be wound up to craft a perfect story. At the same time that I would be liberated from my labor, though, I would be rendered obsolete.

As we develop the power and sophistication of computers they will be able to learn ever more quickly from their mistakes. As they do so, their artificial intelligence improves at an increasing rate until at some point — the moment called the singularity — exponential technological growth from the machines, will result in profound changes to Earth’s civilization. Whether those changes help or hurt human life on Earth depends on the algorithms at the center of the AI.

From the awakening of the golem in medieval Prague to the imminent singularity arising from artificial intelligence, Jewish experience has been at the heart of imagining that artificial life. From Kabbalist Rabbi Loew protecting his community by investing mud with life to futurist Ray Kurzweil (among many other things) teaching Google’s Artificial Intelligence to learn better, there are critical Jewish strands in the DNA of artificial intelligence.

Currently we are struggling with the transition from understanding that machines perform heavy labor (in factories, in mines) to understanding that they are intelligently answering our emailed questions, writing aggregated news stories, making investments and even suggesting responses to the emails in our gmail inbox.

In 1928, the idea of living machines was current. Max Gabel’s provocative production of “Der Golem” was fresh in people’s minds, K. Čapek’s 1920 play “R.U.R.” (“Rossum’s Universal Robots”) had just coined that word, and at Westinghouse, Roy J. Wensley had just built Herbert Televox, a machine that could respond to telephoned instructions.

Čapek was not featured prominently in the pages of the Forverts but Gabel, especially, and Wensley were.

The word “robot” comes from the Czech word for forced labor. But the three words the Forverts used, show the struggle to categorize these new devices. We referred to them all as “goylem” as we might use the word “android” today to refer to an anthropomorphic machine. We also used “oytomat” (maybe from the Russian “avtomat”) meaning automaton. And, most progressively — in a way that Mr. Data from ‘Star Trek’ would approve — we called Televox a “mechanical man” (distinct from a “living man”).

If we add in the term “robot” we run, etymologically, the gamut of terms: from “robots” as forced laborers to “mechanical men” as workers parallel to their living brothers. In the middle lie the approving but anxiety-ridden terms — goylem (a defender who might run amok) and avtomat (an independent being who, again, is not under control). We are still living in the shadow of these terms.

Over the past century we still haven’t quite worked out how to think about the intelligent machines we live with. Over the next few years, though, that problem will pale into insignificance next to the question of what they think of us.