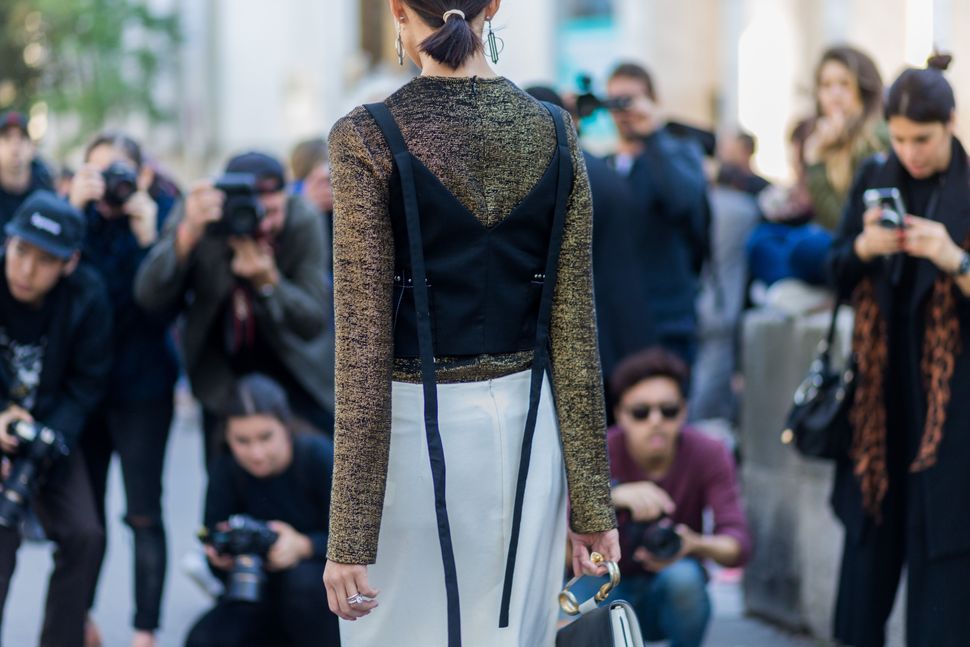 Chriselle Lim wearing a white skirt and jumper in front of photographers outside Ellery on October 4, 2016 in Paris, France. Image by Christian Vierig/Getty Images

On a recent sunny morning, a friend of mine was scrolling through her Instagram, when she received a DM (direct message for you non-Instagram folks) from a modest Jewish fashion blogger. “Hey, I love your creations,” the message went. “Would love to collab and feature you on my page.” The fashion blogger wanted my friend, a small business owner, to make her something for free, in exchange for an Instagram tag and shoutout. My friend was by turns shocked and offended. “[They’re] taking advantage,” she angrily texted me.

The word “collab” has come to mean anything but a collaboration in the true sense of the word. According to Merriam Webster, the word “collaboration” means “to work jointly with others or together, especially in an intellectual endeavor.” Providing someone with free swag somehow didn’t make the official definition.

This is hardly a problem inherent with the religious blogger community; it’s reflective of the commodification of the blogging industry as a whole, of becoming a person devoid of agency or morality in pursuit of fame and fortune.

It wasn’t always this way. The blogging industry began as an earnest attempt for “everyday” people to express their views on an international platform.

In the early days of the Internet, digital communities of like-minded people formed in chat rooms and forums. This led to the creation of platforms where individuals could create and post their views and interests on their own site, like a public version of a journal.

It wasn’t until the early aughts that fashion blogging field began to take hold. Soon, brands started to notice these blogs and the rabid followings they developed. Brands sent swag to the homes of bloggers, in the hope that they would be featured on the bloggers’ websites.

This gifting, and increasing attention to the act of gifting, led to a new generation of fashion bloggers: ones who began blogging for the sake of getting gifted free things and access to exclusive events like fashion week.

If you had money, it was easy, especially with the advent of Instagram. People have a natural desire to live vicariously through others, to peep voyeuristically into lives that seem unattainable. And outrageous displays of wealth pretty much guarantees followers, plus, ironically, piles upon piles of free goodies.

In response, blogs became less amateurish, more carefully curated. Fashion bloggers hired photographers to give them the sheen of perfection, that posed editorial look. Blogging became a branding opportunity, a business in of itself.

Blogging, in its purest form, is the antithesis of this elitism: It is democratic in that you don’t have to be particularly wealthy to make it, one just has to be supremely talented. But as blogging became slicker, more professionally produced (read: expensive), that democracy turned into a tyranny of the few uninspired who managed to become famous by virtue of their ability to purchase expensive clothes and shoes and bags.

And Instagram has only made it worse. Now, instead of blogging, most “fashion bloggers” live solely on Instagram. They continue to use techniques from the heyday of blogging to gain followers: posting photos, commenting on more popular Instagrammers, hosting giveaways by having people “like” posts and follow them (and getting participants to tag their friends in the hopes that they will follow too). And the immediacy and speed of social media puts an immense amount of pressure on bloggers to be more conspicuous about their consumption. Thus, it’s become a cynical, anxiety-ridden game of popularity; bloggers feel this need to inundate their fans with a constant barrage of posts and Instagram stories, each more ostentatious than the last in a persistent bid to try to one-up the competition.

The promise of free clothes and makeup, of name recognition, of thousands of unearned dollars, has driven an entire generation of young people to start their own blogs or Instagram pages. They may be going to school for something else entirely, realizing that blogging is too crowded a space to monetize. But they hope to make something of their blog — maybe a steady supply of makeup from their favorite beauty brand. Or maybe even a seat at a top show during New York Fashion Week. Maybe they’ll even break through and end up at one of the more “prestigious” fashion weeks, like Paris, or the ultimate fashion event: couture.

And they’re shameless about wanting these things. I recall one Jewish fashion blogger stating, explicitly, that she started her blog to get tickets to fashion shows. And, while I admired her honesty and naked ambition at the time, I was also hit with a disappointment: She didn’t care for the artistry of clothing, or what fashion meant, but the prestige that came with a show invite.

Which brings me back to Orthodox fashion bloggers, bloggers who define themselves by their religious observance. While I commend them on their attempt to normalize modest fashion, I can’t help but wonder about the Jewish ethics of accepting free stuff and not disclosing that it was comped when it is then peddled by bloggers on the Internet. Not disclosing that you received something for free in return for a tag or shoutout is unambiguously illegal. In fact, the FTC (the Federal Trade Commission) has explicit rules about this:

To make a disclosure ‘clear and conspicuous,’ advertisers should use clear and unambiguous language and make the disclosure stand out. Consumers should be able to notice the disclosure easily. They should not have to look for it…Disclosures should not [emphasis theirs] be hidden or buried in footnotes, in blocks of text people are not likely to read, or in hyperlinks. If disclosures are hard to find, tough to understand, fleeting, or buried in unrelated details, or if other elements in the ad or message obscure or distract from the disclosures, they don’t meet the ‘clear and conspicuous’ standard.

These rules don’t just apply to blogs, but social media as well. If writing out a long disclaimer that your post is sponsored feels like too much of a burden, writing a simple hashtag, like “#ad” or “#sponsoredpost” is generally sufficient.

Yet as an avid consumer of these blogs, I have yet to see these disclaimers in the plethora of religious modest blogs. Which is pretty disappointing, as Torah law behooves one to follow the laws of one’s country.

But American laws aside, throughout this barrage of free products being thrown at bloggers, I noticed an unsettling trend: Religious bloggers unabashedly asking their followers for free goodies in honor of their birthday month, or for “consideration” in a gift guide round-up. In these instances, the language and the approach becomes even more insidious, more grossly obfuscating: “Collab with me!” they cry.

But they aren’t asking for a collaboration. They’re asking for free products.

These modest fashion bloggers (even many kosher food bloggers) go out of their way to have their home renovation, their birthday party, their bar mitzvahs entirely comped, so that they don’t have to pay a dime out of pocket. Brands, in return will get a “tag” or a shoutout on the blog or Instagram account.

This approach denies a small business their rightful income for the work they do. Sure, a blogger may justify that it’s a win-win, that for the small business owner a simple shoutout will provide more customers and brand recognition.

But, depending on the follower count or the engagement with their followers, these “collabs” don’t often have much monetary effect on a brand’s bottom line. Sure, these brands may get their own sudden influx of followers flocking to their Instagram account. But because most frum bloggers don’t have hundreds of thousands of followers (the most popular modest fashion bloggers number within the 10-30 thousand range), the financial gain is relatively little.

And asking small businesses for free goods or services is not just greedy, it can be deceitful, too. “[They make] the small business think they NEEEEED Instagram shoutouts which in the end don’t even really get you anything,” my small-business owner friend texted me.

This approach wasn’t developed or popularized by the religious contingent of bloggers; this is an ongoing problem in the blogging community as a whole. But for frum fashion bloggers, whose adherence and publicization of their modesty is their calling card, these outward displays of greed are highly problematic.

Being a blogger, especially a popular blogger, is a heady, intoxicating experience; especially as the likes and adoring comments pour in, and packages pile up at the front door. But the experience may lead to unsavory, illegal acts like promoting a product without disclosing that it is an ad. If you’re an observant Jew trying to represent the ideals of a religious community on a very public forum, it’s important to remember that there are more Halachot (Jewish laws) than just modesty. Ethics are important too.

Michelle Honig is a writer at the Forward. Find her on Instagram and Twitter. She can also be reached by email honig@forward.com.