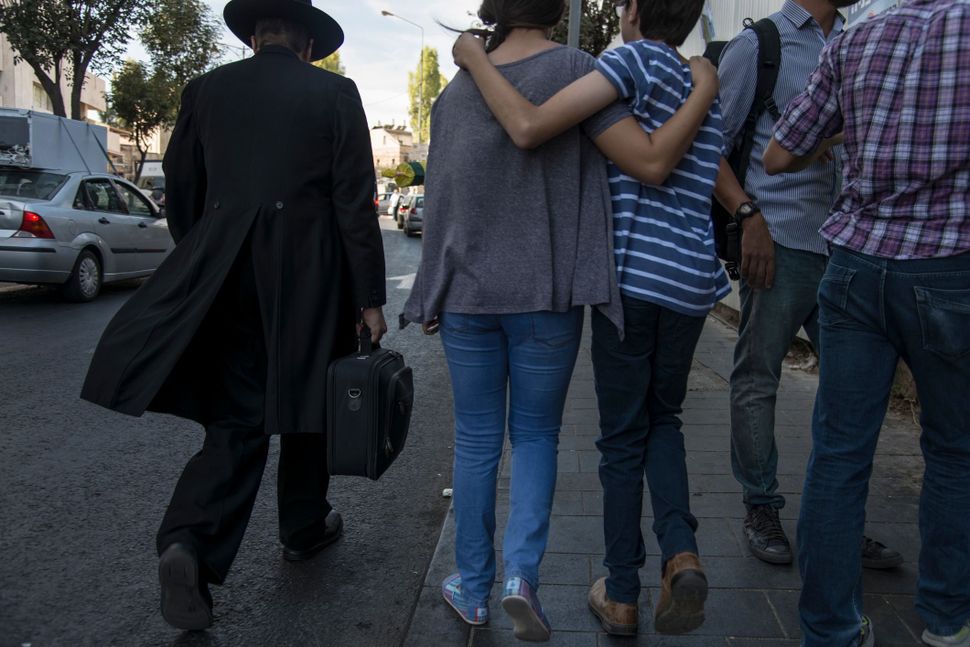 My first venture into nondenominational spaces was, like most young Jews, at my college Hillel.

I grew up Haredi, so I was interested in meeting other types of Jews and other kinds of Jewish ritual and practice. But I didn’t meet anyone like me.

Since then, I have participated in many non-denominational spaces and events, whether it’s Limmud or Mechon Hadar or ImmerseNY. I’m passionate about creating inclusive spaces, because I grew up in a rigid limiting world and want to create accessible meaningful Jewish experiences and rituals for everyone who seeks them.

By and large, the Jewish world supports that endeavor. That is, unless you’re observant.

Large non-profits cater to many Jews, working hard to be inclusive and welcoming. But if you keep Shabbat and kosher, you’re often asked to compromise on your principles, or work extra hard to make sure your personal standards are met.

Liberal Jews supposedly prize diversity and multiple points of view. But as an observant Jew, I can’t help but feel unwanted. I recently attended a meditation retreat funded by a large Jewish non-profit. They covered most of my airfare and accommodations, of which I am appreciative. But the food wasn’t kosher. So I had to fly into the city a day earlier to shop for food for the weekend. As the cohort dined on a bounty of delicious food, I gingerly went to the public fridge in the dining hall and ate my sad Shabbat meals of pita, hummus, and tofurky. Eating brings people together, but when you have to prepare your own meals and eat your own food, people are pushed apart, othered. The looks of sympathy from my peers made me want to crawl up into the ground and disappear.

The organization could have supplied a prepared sealed Kosher meal. They could have arranged personal logistics for observant Jews, like arranging for a room with a manual door key. While these accommodations may cost extra money, many organizations have generous budgets for these kinds of events.

And if leaders are truly committed to making everyone feel welcome, they will succeed, with or without endowments. I saw this firsthand on a recent trip to Bosnia.

I was there for the Muslim Jewish Conference, an annual week-long event that brings together Muslims and Jews from all around the world to foster leadership and interfaith dialogue. It didn’t take a lot for observant Jews to be accommodated, to secure kosher food in Bosnia, the 5th poorest country in Europe.

All it took was: The event founder, a committee chair, the caterer in Vienna doing this as a personal favor, a hired driver, a local fixer, the fixer’s friend who knows the border agent, the border agent, two successful border crossings and one failed one, special insulated boxes wrapped with duct tape, a van large enough to hold a week’s worth of three daily meals with variety for a dozen people, a bribe, nine hours of driving, three conflict-hungover countries, and a ton of money for gas. And a trillion and a half favors.

But nonetheless, we received 250 kosher meals for the small minority of the conference population which observed kashrut. And the event wasn’t even focused on pluralism or diversity; the event founder simply believed it was proper to be accommodating. Kosher food was offered because the organizers believed that kosher food should be offered. Often, American non-profits will commit to using proper language that appeases donors and large multinational organizations, sometimes at the cost of losing sight of the mission. Yet the European Muslim Jewish Conference was focused on us, the participants, not donors. They were able to take care of all our needs on an incredibly nimble budget. Because the manpower and resources were not devoted to fundraising.

So here I am in New York City, spending hours shopping for kosher food for a pluralistic retreat that begins after Shabbat starts, and is called “Exploring Jewish Diversity.”

I am the only kosher eater, so bringing my own food is my responsibility. The retreat coordinator promised to compensate me for my costs. A few hours later, I am picked up by a fellow participant to drive to a mini-mansion in upstate New York where this retreat will take place. Here, Jewish continuity is a very simple calculation: Hot tub plus alcohol. During the drive, my passenger described how her Orthodox Jewish community back home felt exclusive. I agreed. My shoulders ached from holding the grocery bags and I was sweaty from the trip to the supermarket, spending my own money and time getting kosher food for myself. As we made small talk in the car, I knew exactly what it felt like to be excluded. We reached Manhattan and its famous gridlock. The Holland Tunnel felt like a million miles away, even though we could see it through the windshield. We didn’t move as the lights teased us, changing in vain as we stood our ground. It was over a little over two hours to sundown and Google Maps said we were two hours away with traffic. But if traffic popped up anywhere along the way, I’d be in the car when Shabbat started. We would not make it in time.

I tried to reason with myself, to persuade myself to stay in the car to go to the retreat. I wanted to risk it. I wanted to be fearless. We inched our way to the tunnel. I knew that once we entered the two mile long tunnel, there was no turning back. Plus, I’d be in Jersey. At the last parking space before the tunnel, I asked the driver to pull over. I grabbed my knapsack and three bulging grocery bags. I would not have made it before sundown. I had no choice but to return home. I slammed the door and navigated the unmoving cars. Fleeing wasn’t cathartic. It hurt. My fellow passenger didn’t seem too torn up about seeing me go.

I still continue to seek meaningful experiences in pluralistic spaces, despite these issues, because I’m committed to building a Jewish community beyond denominational borders.

A few days later, I complained to a friend in the Jewish non-profit world. He didn’t understand. He mentioned grants and other monetary incentives to change norms and expectations. But these are golden band-aids. These don’t solve the matter at hand. This is not an issue with donors or funds, but rather an issue with the beneficiaries of these trusts, the people in power who make these decisions about programming, funding allocation, and content.

This is not a money problem, but a people one.

No amount of money will create pluralism or safety. Sometimes liberal communities are as uncomfortable with tradition as traditional communities are with liberalism. And people like myself are caught in the middle, unsure of where we belong.

If we are committed to diversity and accommodation, we should create space at the table for everyone to sit at. Not only the ones we agree with.

Eli Reiter is a teacher and writer living in New York. He hosts and produces the longform storytelling show “Long Story Long”. Comments can be sent to the author directly at elireiter@gmail.com.