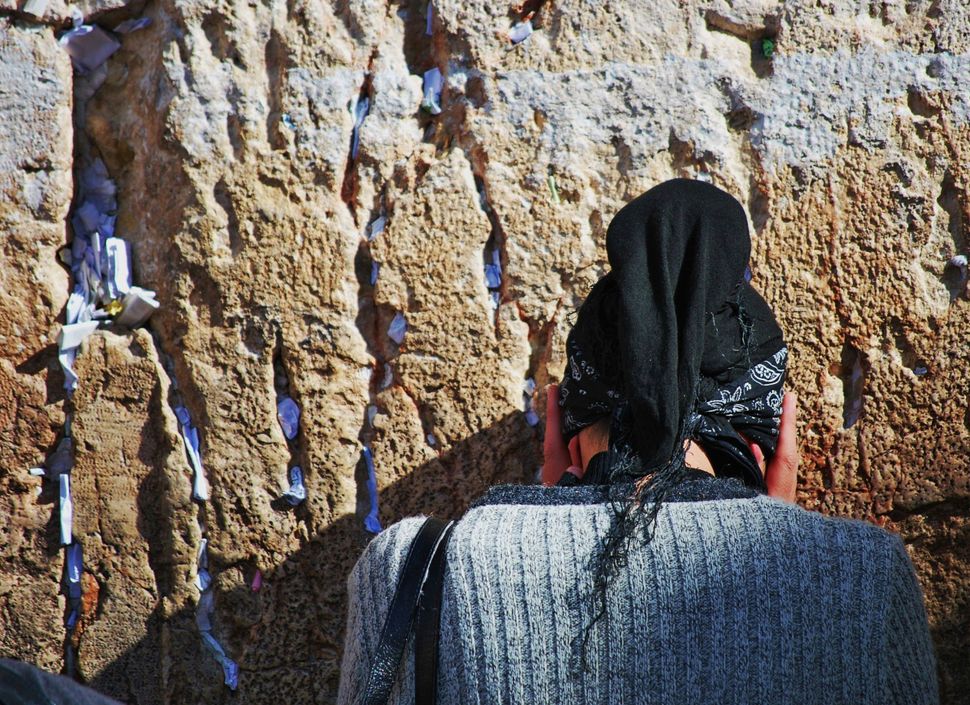 Jewish woman prays at the Western Wall. Image by iStock

As a writer, I’m always looking for material. Even after I made a life-changing commitment to live as an Orthodox Jew, though, it never occurred to me to write my story. In the past decade, however, telling my story felt not only important, but also urgent.

Orthodox Jews are constantly trying to explain themselves to relatives, friends, co-workers, sometimes even strangers, who think that kosher meat was blessed by a rabbi, or that all Orthodox women are basically subjugated to their husbands, or that we have to sit in the dark all of Friday night and Saturday. Before I met some real live Orthodox women, I suspected that most of them were just Stepford Wives with two sets of dishes.

One particular incident drove home this point. I was just seconds from a clean getaway from a weekend writers’ conference. As the elevator doors were closing on my way down to the lobby to check out, another writer thrust his foot inside the car and joined me.

You didn’t have to be a journalist to stare agape at the oddity on my luggage cart: a tall red-and-white box with the incriminating label KOSHER LAMP. I cringed. Why was the item identified in marquee-sized, bold, capital letters?

“What is a kosher lamp?” he asked. His snarky tone gave him away as a Member of the Tribe. I had already stood out during the weekend for other peculiar behaviors, such as walking up the 11 flights of stairs on Friday night, carrying my homemade meals on a paper plate to get to the conference room.

His question was completely reasonable, yet I still felt defensive. The idea of a kosher lamp is an absurdity to a non-Sabbath-observant Jew, but a wonderfully clever convenience to Sabbath-observant Members of the Tribe like me.

I was frustrated that I could not provide a satisfying answer on a dime. I felt like the famous Jewish sage Hillel, who had once been challenged by a skeptic to explain the entire Torah while standing on one foot.

“The lamp has a movable cover, so you can close or open the light over Shabbos,” I explained, falling desperately short of the Hillel standard.

“And what do you think the Talmud would say about that?” he parried, the sarcasm thickening.

Ah, only Jews are nervy enough to challenge other Jews — even total strangers! — about their religious observances or lack thereof.

Our awkward encounter upset me for most of my hour-long drive home. I didn’t want to be seen as weird or as some unthinking religious fundamentalist, a throwback to a previous century. Having carried around so many misconceptions of my own, I knew what it felt like to look down on my brother and sister Jews who were dutifully walking to synagogue on Saturday while I was driving right past them on my way to the movies.

The guy in the elevator knew nothing of my years of personal struggle — intellectually, emotionally, spiritually — that preceded and, to some extent, continued in my life as a ba’alas teshuvah. He didn’t know my former bona fides as a feminist, a staunch liberal, a really with-it kinda girl. He just saw a middle-aged woman in a skirt below the knee, a three-quarter-length sweater with a high neckline, toting a KOSHER LAMP.

How could I have explained to him in mere seconds what it had taken me years to understand and appreciate? The magic of Shabbos is that it is a day where we stop frantically doing to enjoy the serenity of being. There was no way to convey that the laws governing Shabbos observance, even those as small as not turning on or off a light switch, add integrity and spiritual depth to the experience.

So I decided it was time to write my story, not so much to justify my actions but to demonstrate that there was serious thought, logic and spiritual benefits from choosing to follow our ancient Jewish traditions and teachings. But what really set the fire under my feet was the publishing trend of memoirs written by Jews — nearly all of whom are from Hasidic communities — whose stories were uniformly damning, almost dystopian. Since the secular media loves anti-religious stories, these books, even the poorly conceived ones, were praised, their writers interviewed on NPR and other programs.

Without judging any of these writers or what they experienced, I knew it was grossly unfair, even slanderous, that the only view of Orthodoxy on offer to the wider public was a view of religion at its narrowest, most confining borders.

Those writers may have written their truths, but I couldn’t let them speak for me.

My life before committing to Torah observance was a good one. I was in my mid-20s and had a promising career, friends, family, health. I was happy, and no spiritual seeker. With many years of Jewish educational and social involvement behind me, I even felt knowledgeable about Judaism.

But when I met my future husband, Jeff, and agreed to go to Torah classes with him, I was shocked to realize my Jewish IQ was no higher than that of a potato knish. I couldn’t even name the Ten Commandments; I knew Christianity believed that the soul was immortal, but I didn’t know that Judaism had been the source of this idea. My brother had died tragically in a car accident when he was 17 and I was 9, and I also began to wonder how and why this emotionally nourishing — and theologically fundamental — concept had been dropped from the syllabus. What other knowledge and insights had I been denied?

Choosing Torah observance felt right, a path of time-tested wisdom and a framework for a healthy marriage and family life. At the same time, it also felt very threatening to my sense of self and social standing among my good friends, all of them Jewish and liberal. One of them, in reply to something I posted on Facebook with a decidedly conservative viewpoint, shot back, “The Judy I used to know was capable of nuance.”

I’m hardly alone in my journey — over the past two generations. tens of thousands of Jews have turned away from the whimsical and ever-changing values of secularism and embraced a Torah path. While my life has been immeasurably enriched, it hasn’t been a fairy tale. Many mitzvot have come naturally to me, such as giving 10% to tzedakah, charity, and trying to avoid lashon hara, or gossip. But others, such as covering my hair after marriage, were a bridge too far, and I resisted for years. There is also the daily and quotidian grind of checking for hechshers kosher certifications, on food packages, getting ready for Shabbos on time without being stressed out, trying to keep ahead of the private school tuition payments, and more. On occasion, I have become angry and depressed when I have seen religious hypocrisy, narrowness, and a creeping fundamentalism in the more rightward wings of Orthodoxy. Thirty years after saying “I do” not only to my marriage to Jeff but also to keeping Shabbos and kashrut, I have no regrets, only gratitude. Our four children are all married and Torah-observant — choices they made consciously and did not follow by rote.

I wrote my story in part as an answer to the guy in the elevator, because many of us who are formerly secular Jews do still care what a secular Jew might think of a Kosher Lamp.

In a way, it’s a classic baal teshuvah moment — seeking acceptance, no matter how long it’s been.

Judy Gruen’s memoir, “The Skeptic and the Rabbi: Falling in Love With Faith,” has just been released by She Writes Press.