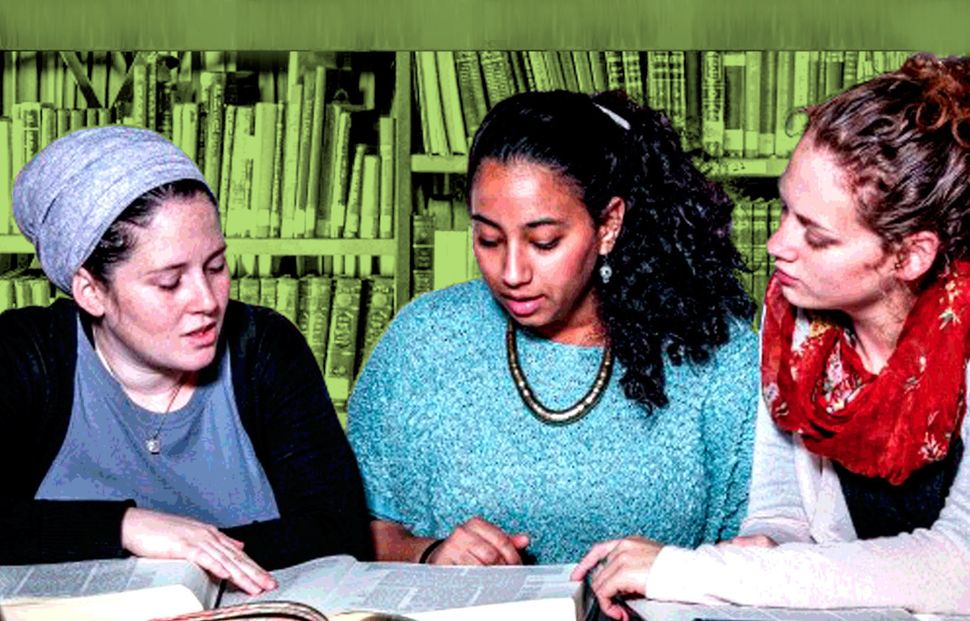 It has been both heartbreaking and also oddly unsurprising to see so many women in my Facebook feed identify as victims of sexual assault and harassment. I say unsurprising because, tragically, there is a human propensity to fall prey to the ugliest trappings of patriarchy.

Also unsurprising because we’ve been here before – this story is as old as time.

After all, patriarchy is endemic to the human condition.

In his bestseller Sapiens, Yuval Noah Harari speaks of patriarchy as one of the most elementary and prevalent forms of socially constructed discrimination in the anthropology of humans. He explores different reasons for this, and cannot point to any as conclusive.

And the Biblical narrative affirms so as well — at the very beginning of time.

This past Shabbat, fresh off the celebration of Simhat Torah, I sat in shul and grappled with Genesis. This year, it wasn’t so much questions about science and cosmology that were occupying my mind – I’ve reconciled many of those and embraced living with the rest. It was the realization that the words of Genesis were describing both a paradise of gender equality and also the birth of gender differentiation and oppression.

Careful readers of the Bible know that the creation of humans is told twice, first in chapter I and then again in chapter II. The first creation describes what in my mind is the true paradise lost: Adam is created in the image of G-D. This Adam is not male or female; they are both. Either, as the midrash says, Adam is an androgynous creature made up of both male and female parts, or a man and a woman are created simultaneously. And it is good, it is gloriously good. I so want to go back there, to grasp that primordial moment in which the first Adam/s are created, in which they see themselves and each other in God’s image and in which they do not treat each other differently because of their gender. Genesis I feels like a dream – a dream in which #metoo does not exist.

But it is not the end of the story. Genesis II recounts the second creation story and, I must confess, it feels less good. The Adam that is created by God is male and he is first. And to give him a companion God takes from his rib and creates for him a woman to be an “ezer Kenegdo”, a helping mate of sorts. And as I read the text I saw not only the creation of woman but also the birth of patriarchy – the moment in which Adam chooses to name her (as he named all the animals) and calls her Isha – because she was taken from “Ish”, from him. He sees her and brands her as a part of him, as his possession, as part of his body. He cannot see her separate from himself. Later in the story – after the tree of knowledge and the serpent and the sin and the loss of that paradise – Adam names the woman again. He calls her Hava, Eve, the mother of all human beings. She is again relegated to be a caregiver, the helping mate for all humankind that will come from her.

For years I struggled not only with these two narratives, but also with the pronouncement that God places on the Isha after she and Adam eat from the tree of knowledge: “VeEl Ishekh Teshuqatekh VeHu Yimshol Bakh”. The verse describes how the woman will long for her man and how he will rule over her. The text challenged me in deep theological ways. I read the Torah as the eternally revealed word of God. Could God be the source of the curse that still plagues us? Could the oppressive rule of men over women be not only present in our tradition, but actually be sourced in it and mandated by it?

The answers are, of course, not simple. The words of Isaac Newton resonate in my mind as I study The Word of God: ““to myself I seem to have been only like a [girl] playing on the sea-shore, and diverting myself in now and then finding a smoother pebble or a prettier shell than ordinary, whilst the great ocean of truth lay all undiscovered before me.”

But while the oceans of God’s truth will take a lifetime to approach, I believe that the Biblical text is concerned less with Divine creation and more with human creation.

Let me explain: I read Genesis I as told from the point of view of God, how Hashem created the universe and humanity. In Genesis II, however, God describes the same event but from the anthropological point of view – dibera Torah kileshon bene adam – the Torah presents a human point of view in which the original creation narrative is transformed from one in which men and women are equal to one in which men have dominion over women. In Genesis II, God describes the way that men experienced and interpreted Genesis I, it is all about human creation, about our social construction of gender, society and human culture.

It is here, maybe, that the Biblical text can help us.

While it does not explain the reason for the prevalence of patriarchy – as old as the first humans, as both the Bible and anthropology remind us – it does posit an idea which was radical for most of human history: that the oppressive dominion of men over women must be seen as nothing less than a pronouncement in a string of curses. I read the woman’s punishment not as a Divine mandate or prescription, but rather a description of how history will unfold, as a curse that will plague us and that we must seek to break in the same way that we have tackled Adam’s curse, of struggling to grow bread from the ground.

We live in such a disorienting time. On the one hand, we have reached further than any previous generation in terms of gender equity: Women and men are equal people before the law, and a woman won the popular vote for the White House. On the other hand, we continue to be plagued with misogyny and sexism, everywhere: From the man holding the highest office in the land to rotten structural support for pregnant women and mothers, to construction workers engaging in catcalling.

Each #MeToo post reminds us that we are indeed far from Eden. Returning to paradise will not be simple. It requires dismantling a socially constructed reality that is thousands of years in the making.

The Beginning of our work is clear, though. Bereshit, in the Beginning, we must have the moral clarity to yearn for Genesis I, to commit to seeing “and he shall rule over you” as a curse, fighting it with all our might.

Only then will we begin to see the world through God’s eyes – holding each human being as absolutely equal and divine.

Mijal Bitton is a PhD candidate at NYU where she is writing on the American Sephardi experience. She is the Rosh Kehillah of the Downtown Minyan and a Fellow and Faculty member at the Shalom Hartman Institute of North America.