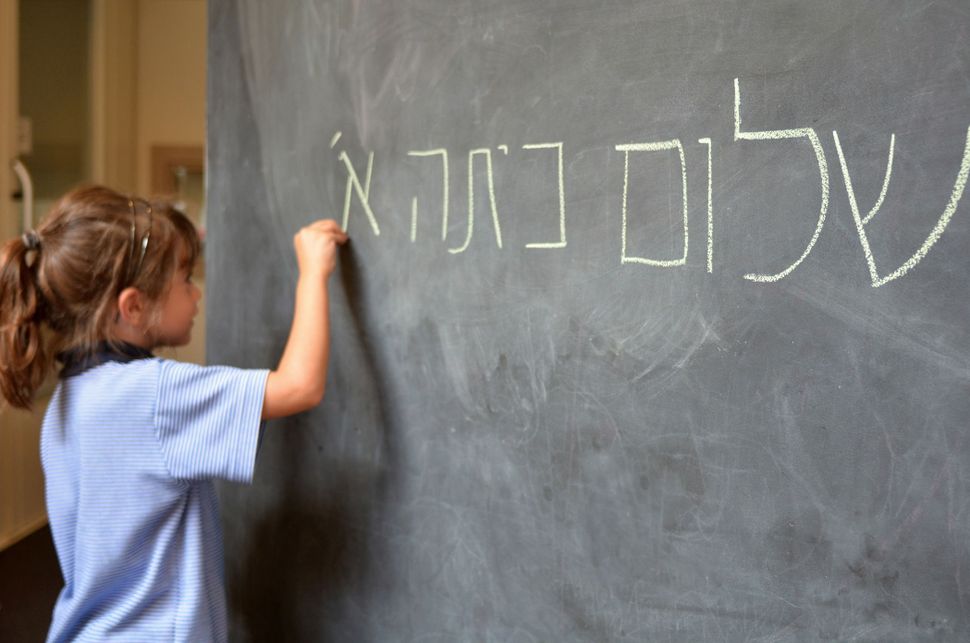 The textbook for the intensive Hebrew class that I enrolled in this past summer was called “Hebrew from Scratch”. Which didn’t technically apply to my situation, at age 48, in the Beginner Aleph classroom.

Forty years earlier, living in Brooklyn and attending my neighborhood public school there, I had begun Hebrew School in Sheepshead Bay’s Congregation Beth Shalom. There, for the first time, I was addressed not as “Erika,” but as יוכבד (Yocheved), the name I shared with a maternal great-grandmother. Between after-school piano lessons and play dates, I rarely attended all four weekday classes; my Hebrew School report card reveals a shamefully grand total of 37 absences across the year. Still, I managed to earn satisfactory, if not stellar grades. “I am pleased with Yocheved’s work,” wrote Mrs. Farkas, my teacher, in her midyear report, “even though she is absent so often.”

But at the end of that third-grade year, my parents and younger sister and I moved to New Jersey. And despite the exponential increases in other realms of Jewish engagement in the years that followed—regular family attendance at Shabbat services; preparation for Bat Mitzvah; even the Temple Youth Group presidency—I failed to maintain, let alone build upon my conversational Hebrew skills.

Eventually, although I still remembered the Hebrew aleph-bet and could recite basic prayers, my vocabulary was reduced essentially to “yes” and “no”; the sentence “I have a question”; and the identification of various schoolroom items (“the notebook,” “the pencil,” “the book”) that might be “on the table.”

In this, I embody some findings of the oft-cited 2013 Pew Research Center’s “Portrait of Jewish Americans”: “Fully half of U.S. Jews (52 percent) say they know the Hebrew alphabet, though far fewer (13 percent) say they can understand most or all of the words when they read Hebrew.” I can’t say that an explicit wish to join the 13 percent is what drove me to the JCC Manhattan to learn “Hebrew from Scratch” this summer. But I can recognize certain strands of Jewish identity that have fueled this midlife return to Hebrew School.

These include, as the late Alan Mintz so eloquently phrased it, the understanding that “as the portable component of the Jewish national idea, Hebrew in the Diaspora is a source of nourishment and delight.” Too, there’s the motivation of Dara Horn’s Hebrew-language-learning story and the sense that more American Jewish writers should be able to converse with their Israeli counterparts in the language that is theirs to share.

Not to mention my admiration for the writer-friends with whom I regularly engage in Tanach-based textual study—and a certain envy for their abilities to refer back to the original text and ferret out nuances that elude me in translation. Similarly, I confess to the highly ambitious dream that I might one day be able to read Israeli literature before it makes its way to English translation.

Finally, and with almost too much metaphorical perfection to be true, there is the hunger that suffused me last fall when I was in Israel—a country whose history and culture and complexities I’ve studied increasingly intensively these last ten years or so. Standing alone in a Tel Aviv supermarket in the middle of one hot afternoon, I couldn’t select a pre-made sandwich because each offering was contained in an opaque wrapper and labeled only in Hebrew.

Whatever the impetus, I signed up for Hebrew instruction at the JCC Manhattan this summer. After 40 years, I was again called יוכבד instead of Erika. Some of the textbook’s contents—particularly when it came to certain gender and other stereotypes— did seem to be rooted back in the earlier era. (But this time, I had perfect attendance.)

Outside of class, it was an exciting new world, one in which I was able to extend the immersive efforts via podcast (thank you, “Streetwise Hebrew”) and streaming video (thank you, “Srugim”). And if in 1977 I hadn’t yet mastered the typewriter keyboard, in 2017 I was able to practice communicating in Hebrew by switching icons on newer devices.

In our four weeks of study, our Beginner Aleph class made only a dent in the textbook. I can’t yet manage a discourse on sandwich fillings, but I can tell you that I’d like red or white יין (wine) with dinner, or maybe that I’ll just skip ahead to the עוּגָה (cake). In fact, when I continue with Beginner Bet, the same textbook will accompany me. But for the first time in 40 years, I feel as though I’m ever so slightly ahead of “Hebrew from Scratch.”

Erika Dreifus writes prose and poetry in New York. Visit her online at ErikaDreifus.com and follow her on Twitter @ErikaDreifus, where she tweets “on matters bookish and/or Jewish”.