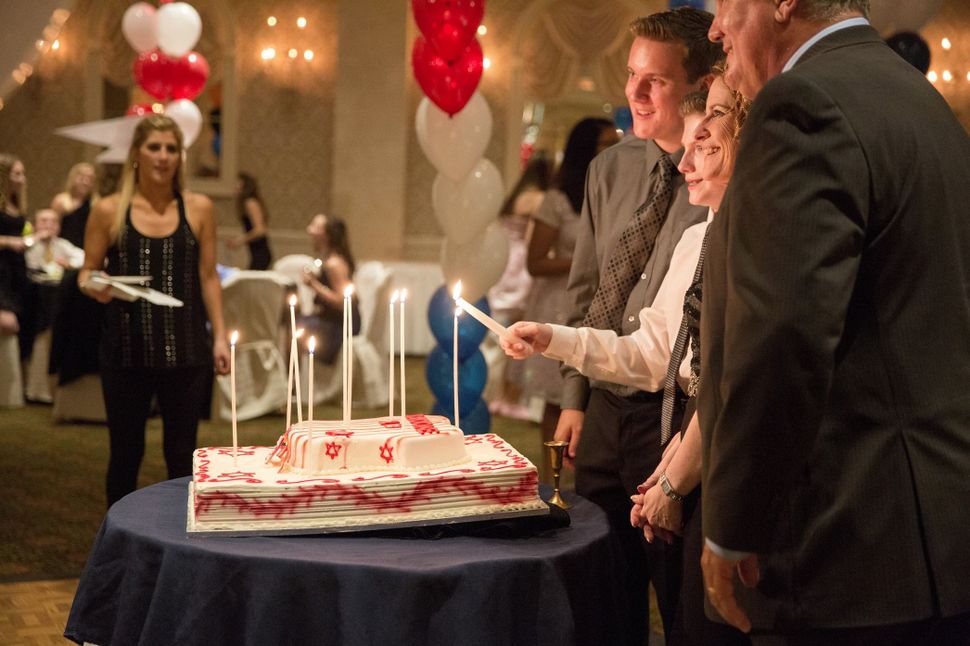 Some people call them “unaffiliated,” some call them “independents,” and others, “off the grid.”

They’re the members of the Jewish community who don’t belong to a synagogue, or affiliate with any particular denomination. According to the oft-cited 2013 Pew Study on Jewish Americans, 22% of American Jews consider themselves Jews with no religion (a breakdown of that number shows an increase with each new generation), while 30% of American Jews associate with no denomination of Judaism. But that rate is also increasing, showing 40% of Jewish American millennials as unaffiliated, including those millennials who are marrying and having children of their own. Many such “unaffiliated,” and even those who consider themselves Jews with no religion, still hold a strong connection to Judaism, and still desire bnai mitzvah for their children.

Many of them choose independent bnai mitzvah in alternative spaces, often held in private homes or hotels.

Peg Rosen, of Montclair, NJ, is the mother of a former student of mine. “I am not particularly religious and have never studied Judaism. At age 9, I was given the choice by my parents between piano lessons and Hebrew school. I chose the former. And that, pretty much, was that. My Jewish life was limited to Passover Seders and Chanukah candle lighting.” When her second son, in fifth grade at the time, turned to her and said that he wanted a bar mitzvah, she made it clear to him that there would be no big blowout party. Still, he wanted one.

Rosen found me through a friend, whose son I was also tutoring at the time. From alef bet and Biblical stories, to Torah and Haftarah trope, to tefillot and divrei Torah, to Jewish history and culture and holidays and everything in between, I tutor students, both via Skype and in person, who are preparing for their bnai mitzvah. I enjoy creating unique bnai mitzvah ceremonies, working with families to create an atmosphere and service that is comfortable and meaningful for each student and his or her parents. I have stood beside my students, facilitating the bnai mitzvah services, watching as they become fully adult members of the Jewish community, committed now to a Jewish future.

And yet, there are those who feel my work is antithetical to what it means to be a member of the Jewish community. In some ways, it might even appear to go against my own beliefs.

I grew up as the daughter of a congregational rabbi, watching my father on the bimah. I was happiest when I could join him, sitting beside him on the large, fancy chairs. Those who surrounded me were an extension of my family. There was a mutual need, me for them, and them for me, because the connection made us all feel closer to something beyond us. I was raised to believe that synagogue is central to family life, and I believe that, in synagogue, surrounded by people, I am closer to God.

But what happens when you stand outside of a synagogue and are too afraid to walk in, because you weren’t raised in one, and you don’t even know where to begin? What happens when generation after generation, kids are given a choice between piano lessons and Hebrew school, and then, one day, the kid turns around and says, ‘I’m Jewish, and I want to know what that means”?

Growing up, of equal importance to synagogue, was Jewish education. My four siblings and I are all day school and yeshiva educated. My parents clipped coupons and sacrificed family vacations; they budgeted every penny of household expenses, and until junior high school, I only ever wore hand-me-downs; all so that we could receive the best Jewish education available to us. This is how my husband and I are raising our own children, too.

But what happens when a family refuses to make the sacrifices necessary to afford day school or don’t have time to shlep to Hebrew school; or when the schools aren’t equipped to deal with special needs education? And what happens when families want to give their children a good Jewish education, but they had to relocate for work, and there are no viable options nearby? What happens when the only local option is antithetical to their belief system?

“Most of the families that we come across today are over-scheduled and many families have both parents who work and are unable to bring their kids to the synagogue several times a week,” says Rabbi Danielle Eskow, Co-founder and CEO of Online Jewish Learning. “Many of the families we work with do not have the time or flexibility to commit to a synagogue school program. Not all families and students fit into the structure of standard synagogue life or Hebrew sSchool for many reasons which include: special learning needs, a divorced family going between two homes, social issues, and more.”

Many of these same issues are cited in the 2015 study by the Community Foundation for Jewish Education of the Jewish United Fund of Metropolitan Chicago (CFJE) on the growing phenomenon of independent bnai mitzvah ceremonies.

When I asked him how he feels about families choosing private tutoring over a traditional Hebrew school, my father, Daniel Liben, a Conservative rabbi with a pulpit at Temple Israel in Natick, MA, had strong feelings on the subject. “There is a huge trade-off by not attending Hebrew school,” he told me. “A primary goal of bar/bat mitzvah is to prepare a young person to take his or her place in a community, and that notion can become hopelessly abstract when the scaffolding of a peer community of friends, the school, the synagogue, and shared experiences with other families are removed from the equation. On a philosophical level, although the individual is of infinite value in Judaism, the Jewish covenant is between God and the Jewish people, not between God and the individual Jew. Our core prayers are in the plural, and our ideal is to pray them with others, in a community. The notion of a private bar mitzvah, or for that matter a private bris, wedding or funeral, would have appeared odd to any previous generation of Jews, who always sought to frame the personal event within a communal context. The trend towards private celebrations reflects the uniquely American, contemporary focus on the individual, and concurrent devaluation of the role of the community.”

While that there are those who leave the synagogue framework in order to pursue what they see as a more appealing option of private bnai mitzvah, for many people the choice isn’t between Hebrew school or private tutoring. The choice is between private tutoring or nothing.

“ I had no interest in institutional Judaism, and joining a synagogue was out of the question for our family,” said Rosen. “After years of hard work with an independent tutor, my son had the bar mitzvah he wanted. The sight and sound of my son at the Torah will remain one of the sweetest and profound in my life, right through to the last breath I take.”

For me, there is nothing more rewarding than watching a child go from not knowing who Abraham and Sarah are, to seeing her step up to the bimah, proud of all she accomplished.

And as she steps down from the bimah, I hope that her bat mitzvah studies are just the beginning of a lifetime commitment to Judaism.

Talia Liben Yarmush is a writer and a Bnai Mitzvah tutor. You can find more about her at www.TaliaYarmush.com.