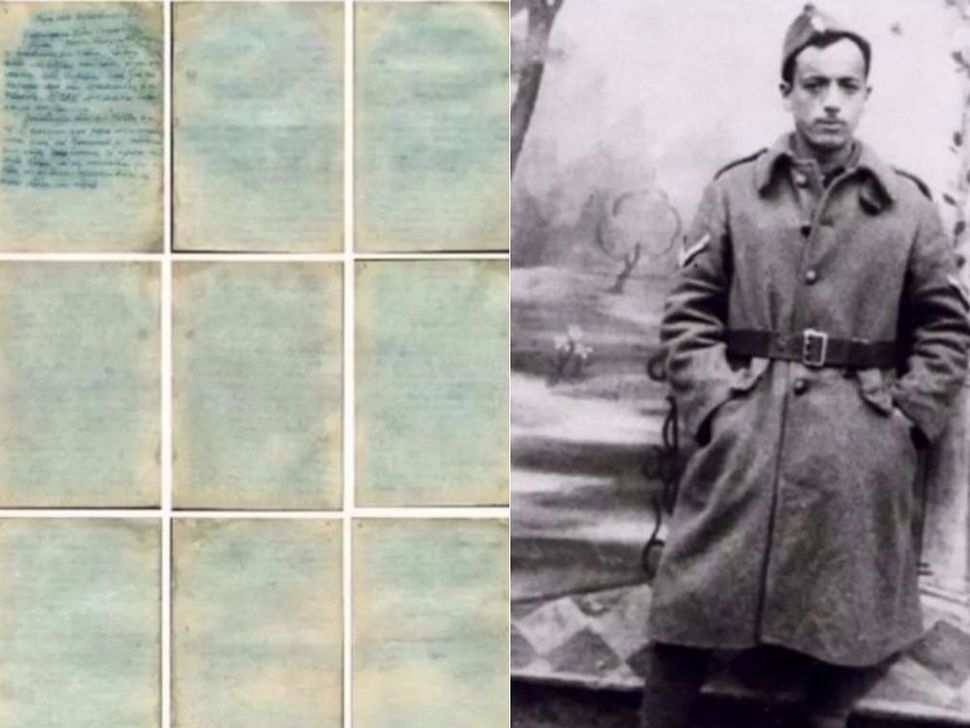 Marcel Nadjary, a Jewish soldier in the Greek army, was 27 years old when he was captured by the SS and deported to Auschwitz in 1944.

There, he was tasked with the job of a Sonderkommando — transporting the bodies of gassed victims from gas chambers to crematoria.

“I am not afraid of dying,” he wrote. “After all, how could I fear it, after everything that my eyes have seen?”

Towards the end of his time in Auschwitz, before liberation, Nadjary wrote and hid a secret letter in a thermos, buried underground, detailing the daily horrors he witnessed, hoping that someone would find the letter and pass it on to the Greek consulate. He and his fellow Sonderkommandos, imagining that the Nazis would be successful in eliminating all Jews, wrote these testimonies out of fear that the world would never believe the realities of what took place.

“This is my last wish. Condemned to death by the Germans because I am Jewish,” he wrote. These were, in effect, their last wills and testaments.

“There isn’t a single Jew left in Europe,” his letter says. “We must disappear from the face of the earth, because we know so much about the unimaginable methods of their abuses and reprisals.”

The manuscript was unearthed in 1980, but only recently deciphered. It was 90% illegible until Russian computer specialist Aleksandr Nikityaev used spectral analysis, dialing up the contrast on digital images of the letter, to expose textual outlines that were invisible to the naked eye, along with the help of Russian historian Pavel Polian.

Aleksandr Nikityaev used spectral analysis to expose textual outlines that were invisible to the naked eye. Image by Pavel Polian

Nadjary’s letter was one of nine documents that have been called the Scrolls of Auschwitz, a series of hidden accounts written by Sonderkommandos in Auschwitz. Historians believe there are dozens more that have yet to be unearthed.

Nadjary survived the war and moved to the United States, where he died in 1971 at the age of 54; he told no one about the letter he had left behind.

The letter has been published in full in German, in the Vierteljahrshefte für Zeitgeschichte (Contemporary History Quarterly), and below in English.

To my beloved companion, Smaro Efraimidou and so many more, of whom I will always think, and finally, to my beloved fatherland: “ELLAS,” to whom I was always a good citizen. –

On April, 1944 we were transported from our Athens, after I suffered through a month in the camp Chaidari where I always [word crossed out] received good Smaro’s packages, and his efforts on my behalf remain unforgettable in these terrible days I am going through. …always, that you … search … for her. Dear Misko and at sometime … get her address for me … our Ilias and that you always look after him … and that Manolis (an alias Nadjary used for himself) has not forgotten them.

But also that it looks like we will unfortunately not see one another again.

After a journey of ten days we arrived at Auschwitz on April 11 where they brought us to the camp Birkenau, we stayed approximately one month in quarantine and from there they relocated us, both the healthy and the sick. Where? Where, dear Misko? To a crematorium, I will explain for you below our lovely work that the Almighty wanted to have us perform.

It is a large building with a wide chimney with 15 ovens. Underneath a garden there are two huge endless cellars. The one serves as a place to undress and the other as a death chamber, where the people enter naked and after the room is filled with approximately 3000 people, it is locked and they are gassed, where they breathe their last after 6 to 7 minutes of martyrdom. Our work consisted of first receiving them; most did not know the reason … breaking down or sobbing they were told that … this was for a bath … and they went to their deaths suspecting nothing.

Until today… I said that each … (fragments of words that cannot be deciphered) … I said to them, that I didn’t understand the language in which they spoke to me, and to those people, men and women, where I could see that their fate was sealed, I told the truth.

After … all naked, they went further into the death chamber in which the Germans had affixed pipes on the ceiling … so they would believe, that the bath was being prepared, with whips in their hands the Germans drove them closer and closer together, so that the largest number possible would fit, a real sardine tin of people, after which they hermetically sealed the door. The boxes of gas always came in cars from the German Red Cross with two SS people … It was the gas people that then poured the gas through the openings.

After a half hour we opened the doors and our work began. We carried the corpses of these innocent women and children to the elevator, which transported them to the room with the ovens, and there they put them in the ovens, where they burnt without the aid of fuel because of the fat that they had.

A person produced only about half an okka (640 grams) of ashes, bones that the Germans forced us to crush, to then press through a coarse sieve, and then a car picked it up and poured it into the Vistula River (actually the River Sola), which flows by in the area and thus they eliminate all traces.

The dramas my eyes have seen are indescribable. About 600 000 Jews from Hungary have passed by my eyes, – French – Poles from Litzmannstadt, roughly 80 000, and now most recently about 10 000 Jews from Theresienstadt in Czechoslovakia arrived.

Today a transport came from Theresienstadt, but thank God they were not brought to us, they kept them in camps, which means that the order was given not to kill any more Jews, and that appears to be the case, they changed their minds at the last moment – now that there isn’t a single Jew left in Europe, but for us things are different, we must disappear from the face of the earth, because we know so much about the unimaginable methods of their abuses and reprisals.

Our unit is called the special unit, it included at the beginning about 1000 people, of these 200 Greeks and the rest Poles and Hungarians, and after heroic resistance, because they wanted to only remove 800, because all one hundred outside of the camp and the others inside. My good friends Viko Brudo and Minis Aaron from Thess/niki were killed in action. They will eliminate us too, now that this command has been given, we are 26 Greeks overall and the remaining ones are Polish. At least we Greeks are determined to die like true Greeks, just like every Greek knows how to leave life, by showing until the very last moment, despite the dominance of the criminals, that Greek blood is flowing through our veins, like we have also shown in the war against Italy.

My dearests, when you are reading what work I have done, you will say: how could I, Manolis, or anybody else, do this work and burn fellow believers. At the beginning I told myself the same thing, many times, I thought about joining them, in order to end everything. However, the thing that kept me from doing so was revenge; I wanted and I want to live, to revenge the deaths of Dad and Mum, and that of my beloved little sister Nelli.

I am not afraid of dying, after all, how could I fear it, after everything that my eyes have seen? Because of this, dear Ilias, my beloved little cousin, you, and all my friends, should know your duty, once I am no longer. From my little cousin Sarrika Chouli you remember her, the small one that was at my house back then? Who still lives, I learned, that Nellika was together with your little sister Errika, until their very last moment. My only wish is that what I am writing reaches your hands. My family’s property, I leave for you, Misko, with the request that you will take in Ilias, my cousin. Ilias is a Koen and you should view him as if he were myself, you should always look out for him, and in case my cousin Sarika Chouli comes back, you should treat her, dear Misko, like your beloved niece Smaragda, since here we are all experiencing things that the human mind isn’t able to imagine.

Remember me from time to time, like I am remembering you.

Fate doesn’t want me to see our Greece as a free man, as I experienced it on 12.10.43. Whenever someone asks after me, simply say that I no longer exist, and that I have gone as a true Greek.

Help all those, dear Miskos, who come back from the Birkenau camp.

I am not sad, dear Misko, that I will die, but that I won’t be able to avenge myself the way I would like to. If you receive a letter from my relatives abroad, please give the fitting answer that the family A. Nadjari is annihilated, killed off by the cultivated Germans, do you remember, dear Giorgos? Please pick up, Misko, the piano of my Nelli from the Sionidou family and give it to Ilias, so that he always has it with him in commemoration, he loved her so much and she loved him, too.

Almost always, when they kill, I ask myself, if God exists, and nevertheless, I have always believed in Him and I still believe, that God wants His will to be done. I’m dying happy, because I know that at this moment our Greece is free. My last words will be: Long live Greece.

For about four years now they have been killing the Jews … they killed Poles, Czechs, French, Hungarians, Slovaks, Dutch, Belgians, Russians und all Thess/nikis, except the 300 who are still alive today, (in) Athens, Arta, Kerkyra (Corfu), Kos and Rhodes.

The honored Greek Embassy which will receive this note is asked by a good Greek citizen called Emmanouil or Marcel Nadjari from Thess/niki, previously resident in Odos Italias No. 9 in Thess/niki, to send this note to the following address.

This is my last wish. Condemned to death by the Germans because I am Jewish.