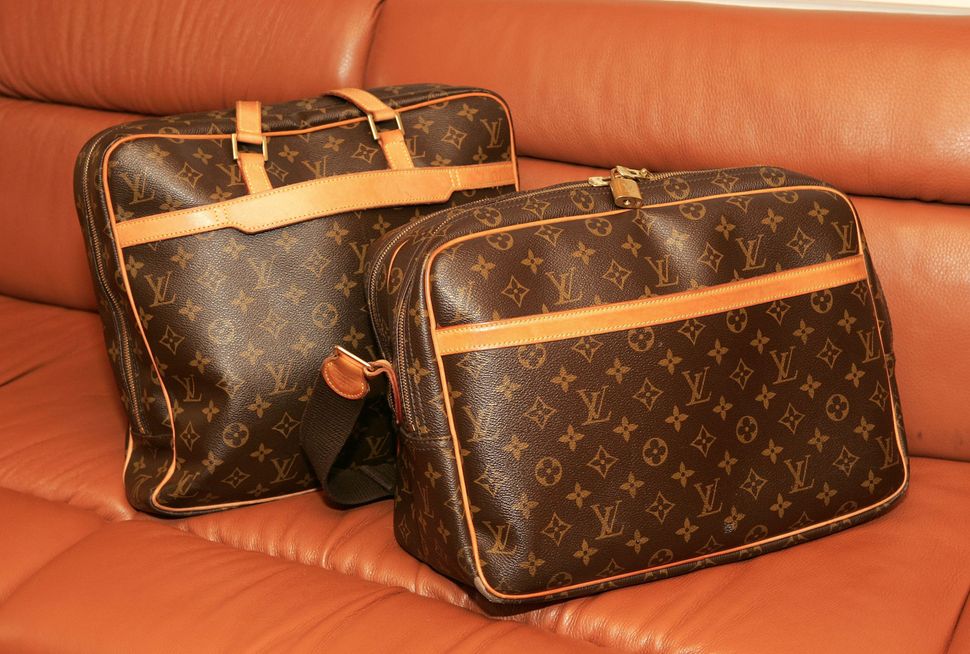 Visiting the new Louis Vuitton exhibit “Volez, Voguez, Voyagez”, I was struck by the way the exhibit valorizes Mr. Louis Vuitton, positioning his progress as parallel to many great technological innovations like the car and airplane. Louis Vuitton’s personal history is mythologized at the exhibit in service of the brand, with the story of the young man who left home with a few francs in his pocket to move to Paris for two years and work on what would become a $28.1-billion brand. Vuitton created ingenious, durable trunks for every occasion, on view in the thoughtfully designed exhibit, from ones with a space for a spare wheel to carry in a car to ones with compartments for everything from hairbrushes to shoe polish.

Louis Vuitton might be an aesthetic inspiration to many, but he certainly didn’t spare much thought for the Jews.

In her book Louis Vuitton, A French Saga, Stephanie Bonvicini details the way members of the Vuitton family made money during dealings with Germans during wartime. While researching for the book, Bonvicini was told that company documents from the year 1930-1945 had been destroyed in a fire.

Marshal Philippe Pétain was an authoritarian-supporting, German-state-collaborating leader of the Vichy puppet government in 1940’s occupied France. Louis Vuitton had a store on the ground floor of the Hotel du Parc in Vichy, near where Petain had established his government. All other shopkeeper’s stores were shut down. The Louis Vuitton shop was permitted to stay. Bonvicini mentions that she discovered that Gaston Vuitton, the grandson of the eponymous creator, had instructed his son to forge links with the Petain government to keep the company in business.

All this is ironic, to be sure, given how many Jewish women consider the Louis Vuitton bag a staple; take a gander at any red carpet photos and you’ll find plenty of Jewish celebrities posing in some airy, perennially stylish off the runway Louis Vuitton.

‘Volez, Voguez, Voyagez’ translates from the French into fly, sail, travel. From aviation to oceanic exploration, the Louis Vuitton legacy prides itself on having created bags that can be taken anywhere. The exhibit is all about forward progress and journeys through time. It is organized thematically rather than chronologically, focusing on feats of human progress as displays for pieces of vintage luggage. Note the lovingly curated trompe l’oeil train car and biplane model upon which expensive, hand-crafted leather trunks rest.

“Because the title of the exhibit is ‘Volez, Voguez, Voyagez,’ we tried to create this idea of always moving or dreaming,” master curator and historian Olivier Saillard told Vogue Magazine.

Do we focus on the future and forgive Louis Vuitton his pro-Nazi indiscretions?

A spokesman for LVMH told the Guardian: “This is ancient history. The book covers a period when it was family-run and long before it became part of LVMH. We are diverse, tolerant and all the things a modern company should be.”

Can we keep moving forward into the future while holding onto the past? Do designer bags that are sold on brand recognition and inaccessible to the everyday American really matter? Can a history filtered through the lens of commercial consumerism ever be truly unbiased?

Check out this exhibit and decide for yourself.

The exhibit “Volez, Voguez, Voyagez – Louis Vuitton” is open until January 18 at the American Stock Exchange Building in New York.

Shira Feder is a writer at The Forward. You can reach her at feder@forward.com