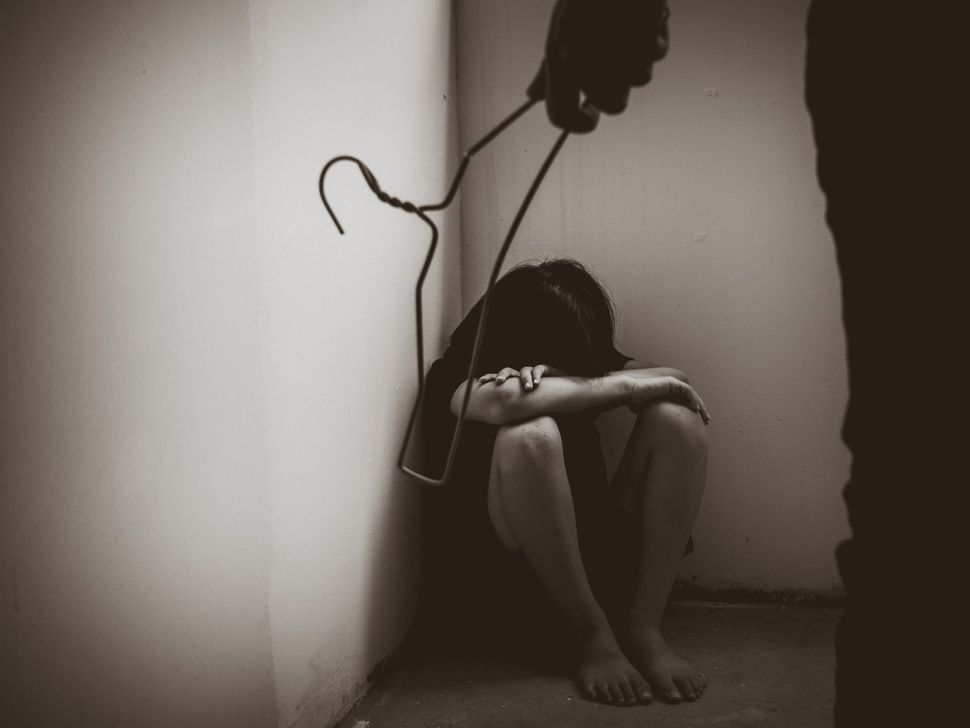 Jews are wringing their hands over the Weinstein sexual abuse allegations. Oy, what a shanda!

Then comes an even more shocking story. Three adult sisters, raised in an ultra-Orthodox community in Australia, have accused the female principal of their former religious school of indecent assault and rape. As I read Dina Kraft’s compelling article Australian Sisters Recount Alleged Sex Abuse, my eyes are drawn to a detail that, on the surface, has nothing to do with sex: “….We grew up in an extremely dysfunctional and abusive home,” said Elly Sapper, 28.

Until that moment, I thought I was the only Jewish woman who had been regularly beaten by her father. I’m not talking about a potch ‘n tuchis. I’m talking about a grown man viciously punching, kicking and hitting a small child.

Growing up in a middle class suburban Philadelphia home, I was convinced from an early age that I was entirely to blame for my father’s rage. “If you wouldn’t provoke him,” my mother would say, pulling down the blinds and closing windows so the neighbors wouldn’t hear my screams.

Since it was my fault that my forty-year-old, 160 pound father broke down every door in our house to get to me, a skinny eight-year-old, I not only felt responsible, I felt deeply ashamed. This did not happen in other Jewish homes, I reasoned. There was something wrong with me.

I had learned not to cry while being dragged by my hair or having my thumb dislocated from my hand. Crying would’ve shown weakness. I wanted to be strong. That meant creating two selves. One who was a victim. The other was a survivor. A quiet, artistic, “normal” kid who got good grades, made friends easily and never had any disciplinary problems in school.

None of my teachers, relatives or friends ever suspected. My father was careful not to leave bruises where they would show. “Not in the head,” my mother would yell while my father pummeled me with his fists. The agony wasn’t that I was physically abused. It was that I was abused by a father I loved.

When my father was not in the grip of a sadistic tantrum, he was a kind, gentle, affectionate man. He taught me how to ride a bike, swim, skate, ski and drive. I loved helping him plant tulips in the garden and accompany him to the hardware store. I was Daddy’s Girl. Looking in the mirror, I saw his high forehead, his long, narrow face and graceful hands. The same hands that beat me.

Sometimes, in the midst of a beating I would threaten to “tell.” I never did. Except one time I attempted to confide in my mother’s older sister. I was fifteen years old and we were having lunch at Schraft’s.

“Do you know my father beats me?” I asked. My aunt dropped her fork. “I don’t want to hear another word,” she said, clasping her hands to her ears. “Do you know how hard he works to put a roof over your head?” That was it. It was all my fault and I really should be ashamed.

Ironically, my father never directed his anger toward my older sister or mother. If he had, I was convinced my mother would’ve left him. Somehow, she could accept his brutality as long as I was the only target. This increased my guilt. My mother and sister were “good.” I was bad. I didn’t learn about the concept of “enabling” or being the family scapegoat until I was taking Educational Psychology in college. I also learned then that my father had been physically abused as a child. He had scars across his back from where his father had beaten him with a leather strap. Too late. By that time the damage of my childhood had hardened into an impenetrable veneer.

Over the years, I tried to empathize with what I now think of as my father’s mental illness and my mother and sister’s survival mechanisms. Surely, they too were impacted by the dysfunctional pattern. Yet, even after my father’s death, they refused to discuss it.

“It’s too upsetting,” said my sister.

“What could I have done? Where could I go?” cried my mother before she died.

She had a point. In the 1960s, Jewish mothers didn’t seek psychological counseling for family issues. My father didn’t drink. He didn’t gamble. He didn’t look at other women. The term Anger Management had yet to be codified. Women in my mother’s crowd had tsoris, not depression. Schpilkis, not anxiety. They didn’t take medication. They took vacations in the Catskills and mambo lessons.

As my peers now are sharing stories of sexual abuse, I have the courage to open the doors that have long been sealed shut on my secret past. When it comes to growing up in a dysfunctional Jewish home with physical abuse, I can finally say — without guilt or shame – me too.

Stacia Friedman is a freelance writer in Philadelphia.