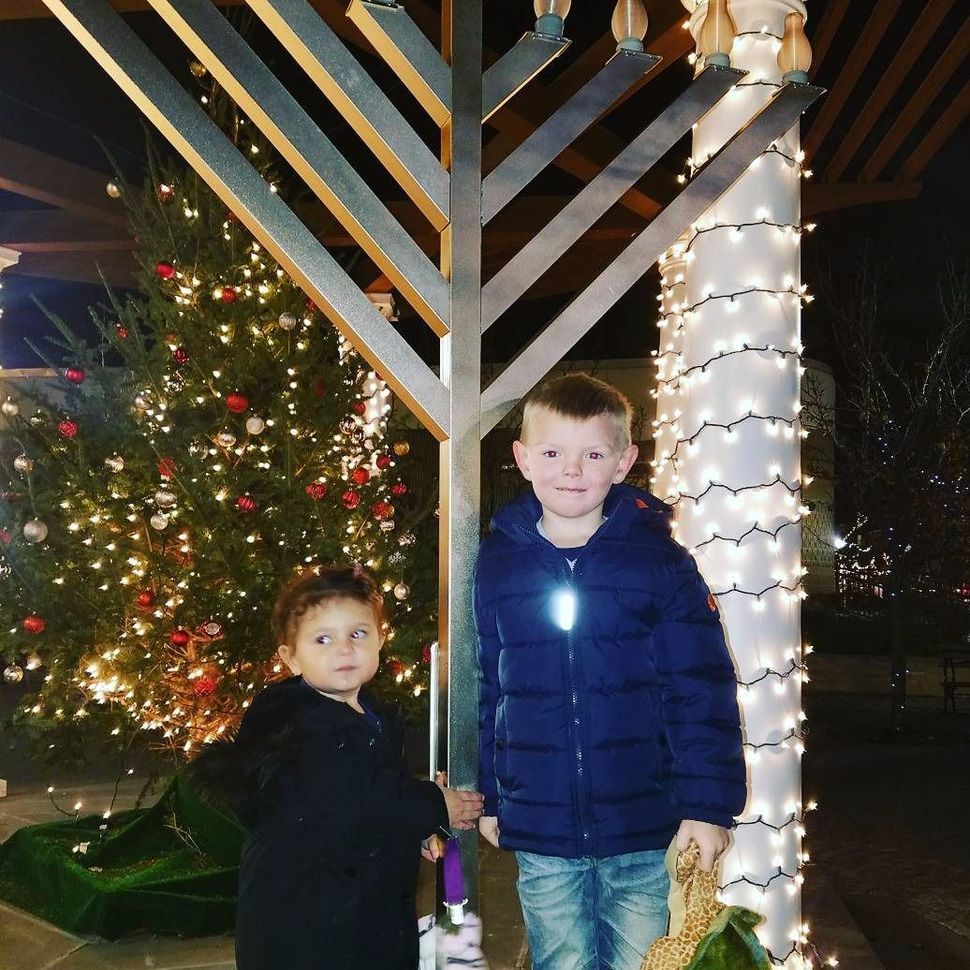 Author’s daughter and friend in front of a menorah and Christmas tree.

How much would you pay for Hanukkah guilt? No, not gelt, the gold-covered chocolate coins strewn about on this Festival of Lights, but actual guilt. You know, the Jewish kind.

I asked myself this as I stood in a packed Judaica store on the Upper West Side, one of the dozens of New Yorkers who just realized that it was about to be Hanukkah and hadn’t prepared much of anything.

As a new-ish mom – my daughter is two-and-a-half, so it’s technically her first Hanukkah – and a former Orthodox Jew married to a staunchly secular Israeli, I had no idea how our family was going to celebrate this holiday (or any other one, for that matter).

All I knew is that a few days before, when I’d asked my tot with my usual high-pitched mom glee, “What holiday is coming up?” she shouted “Christmas!”

All the rabbis were right, was the first thought that popped into my head: divine punishment, the end of the Jews, yada yada yada. But what did I expect? Even though my daughter was in full-time daycare in Harlem with a predominantly bunch of Israeli kids, the educators were all full-on Christian.

“I can’t tamper down my Christmas spirit,” her teacher said, making me feel like the Grinch.

“No, never,” I said, taking a look at the extensive calendar, with reindeer-making and tree decorating on it. “Just a bit more Hanukkah,” I meekly said, offering up my musician husband Solomon for a sing-along (I’d have to teach him a lot of the English holiday songs as his repertoire didn’t go beyond “I Have a Little Dreidl”).

“I don’t know much about the holiday except the menorah and the latkes,” her teacher said. I ran home and to collect all my books – some from PJ library, the organization that sends free Jewish books and other gifts for young children. My daughter was liking “The Chanukah Guest” a 1992 story about an old bubbie who was hard of hearing and seeing and hearing and mistook a bear who smelled her latkes for the rabbi. But what did that teach? “The Hanukkah Trike” they sent taught more about presents and bravery than the actual holiday.

So I ran to the religious Judaica store and surveyed their wares. Lots of benign books naming the foods and traditions of the holiday, and on the other end of the spectrum many mentions of the Beis Hamikdash in their children’s literature; but I doubt my hubby would be pleased if I tackled the Second Temple and its rebuilding with my daughter. (Her teacher, a devout church-goer, would be thrilled with the idea.)

“What is your most secular interpretation of Hanukkah?” I’d asked Solomon, who was kind of in charge of our non-religious religious education. “A holiday of miracles?” I said.

He laughed. “That’s the most religious interpretation,” he said, revealing the actual divide between us: him an atheist, me an agnostic spiritualist. I rather liked the idea of celebrating miracles (especially political ones), even though I knew the holiday was really about celebrating the Hasmoneans’ religious victory.

“The Festival of Lights?” he suggested. In Israel, one didn’t have to think too much about these things—which probably explained why the other Israeli parents in daycare weren’t up in arms about Christmas, as they knew they’d probably be returning to the motherland, where Hanukkah was about bopping people on heads in raucous parades, school vacation and presents.

Oh, speaking of gifts, let it be said that I’d spent the morning on Amazon searching for toys with a one-day delivery. My kid was going to get one present for each night. Actually, most Americans – 68% — get a present each night, according to a survey by National Today. (It also found that men prefer apple sauce and women sour cream on their latkes: who knew?)

At the store, I filled my basket up with every holiday tchotchke there: Gold coins? Check. Silver too – though no one really liked the pareve non-dairy ones. I even threw in a few Belgian chocolate soldiers (the chocolate was Belgian, the soldiers were Maccabees.) Dreidel erasers, a paint-by-number menorah, Jewish star stickers and holiday cookie cutters (for some reason that included a Chai symbol –- which my daughter thought was an elephant).

For the first night I invited over my family and friends with kids/or who could tolerate them: We’d spiralize latkes, eat jelly donuts, sing Hebrew songs, oh, and of course, light the menorah too. I was hoping to do something like this every night.

My daughter may not know the meaning of the holiday, but dammit, this was going to be the best Hanukkah ever.

And when I picked her up from school before the holiday began, I said, “What holiday is coming up?” And she squealed in her high-pitched toddler voice: “Hanukkah!”

Amy Klein is a regular contributor to the Forward.