Roy Moore’s Defeat Was Definitely Not A Hanukkah Miracle 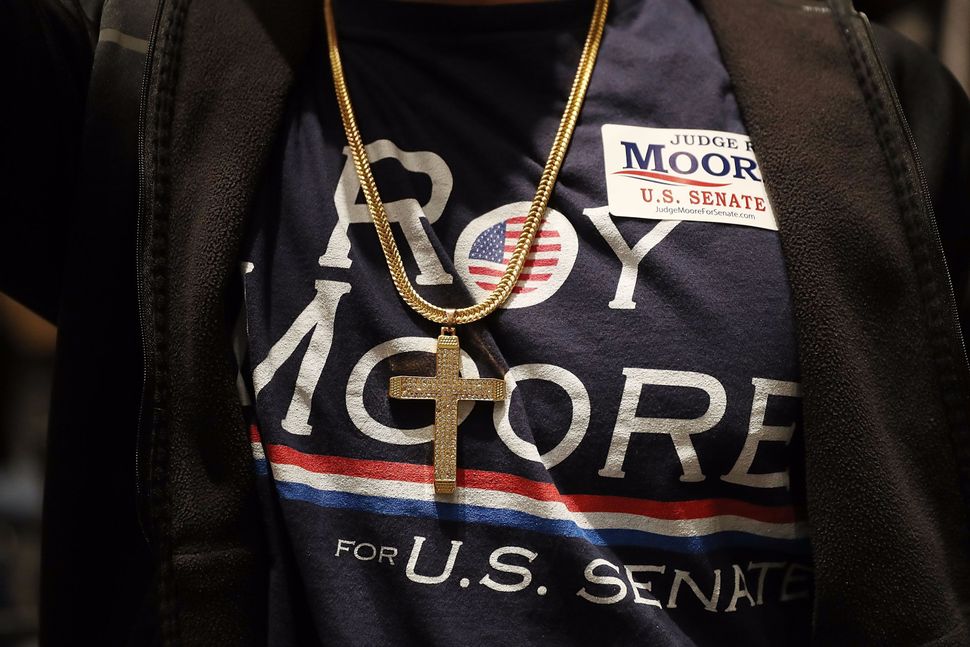 As the internet celebrated the victory of a non-alleged pedophile in Alabama, many on social media reveled in the idea of the election as a Hanukkah miracle. Sure, it was a triumph of good over evil. And yes, the victory of Doug Jones was a small repudiation of our assaulter-in-chief. I am more reluctant to say it was a miracle.

A Hanukkah miracle! From this Jewish lawyer to Roy Moore’s — sorry buddy, the good man won.

Hanukkah can be deconstructed into three aspects: ideology, violence and finding oil that lasts a longer time.

In the ideological victory, chochmas yivanisvs (Greek ideas) are defeated and Jewish values triumph — at least that’s what my rabbis have told me as the celebration of Hanukkah. At our parties in yeshiva, they would give rousing speeches reminding us to reject the world around us. It was the reason to not attend secular college and study philosophy –- these were Greek ideas. The Greeks also celebrated humanism and beauty, with an appreciation of aesthetics like music and the arts. The Olympics celebrated the human form. In Greek Mythology, gods fall in love with one another over beauty. But Jew celebrate “real” beauty: i.e., holiness and devotion.

I’m skeptical that Doug Jones defeated Roy Moore because of ideology or values or the appreciation of aesthetics. He won because there was a lot of money in the race. He won because he was only slightly more decent than the other guy. He won because of people like Nathan Mathis, a quiet farmer whose gay daughter committed suicide, stood outside a Moore rally in a small county in Alabama, holding up a picture of his daughter, Pattie Sue. A peanut farmer, Mathis admitted that like Moore, he also harbored some anti-gay feelings. He acknowledged that he had said things he regrets. “This is something people need to stop and think about,” Mathis said. “You’re supposed to uphold the Constitution. The Constitution said all men were created equal. But how is my daughter a pervert just because she’s gay?”

Violence is another aspect of Hanukkah. Because I don’t want to place 2017’s values on 167 BCE, I can’t call the Maccabees terrorists, freedom fighters or zealots. The Maccabees used violence to defeat their oppressors. This small group of under-resourced, trained strongmen defeated an empire. The Hanukkah story is more Star Wars than Alabama.

Moore had GOP support. The Empire, led by Darth Trump, tweeted his support for him (even though he’s now claiming he didn’t really back Moore). But Doug Jones raised twice as much as Moore. According to financial data, Jones raised $11.5 million to Roy Moore’s $5.2 million. Democratic powers across the country were also helping Jones — unlike much of the Republican establishment. But to call it “a surprise upset” is pushing it.

Then there’s the actual miracle of Hanukkah, celebrating the high priests’ finding oil for the Temple’s Menorah. There were resources put into his campaign to win — almost $12 million. They lasted this one election. The senate seat was decided by about 21,000 votes — a 1½ percentage margin. That’s a narrow, hold-your-breath number because it could have gone either way. If this were Florida, there would have been a recount. It wasn’t one day’s resources that lasted much longer.

As U.S. Attorney, Jones prosecuted two cases against zealots. He called winning a conviction against two escaped Klansmen in a 1963 church bombing that killed four girls “the most important thing I have ever done.” He also helped prosecute “Olympic Park Bomber” Eric Rudolph, the domestic terrorist who bombed abortion clinics. In short, Jones went after criminals who used religion as a cause to wreak havoc; terrorists who believed in violence to share their beliefs with the world. These are the anti-Maccabees. Doug Jones would almost certainly prosecute the Maccabees for their actions.

In some ways, the election is a triumph of decency over zealotry. I’m not sure if that’s in the spirit of Hanukkah.

Eli Reiter is a teacher and writer living in New York. He hosts and produces the long-form storytelling show “Long Story Long.” Comments can be sent to the author directly at [email protected]

Roy Moore’s Defeat Was Definitely Not A Hanukkah Miracle