Why Christmas Lights Fill This Jew With Joy — And Dread 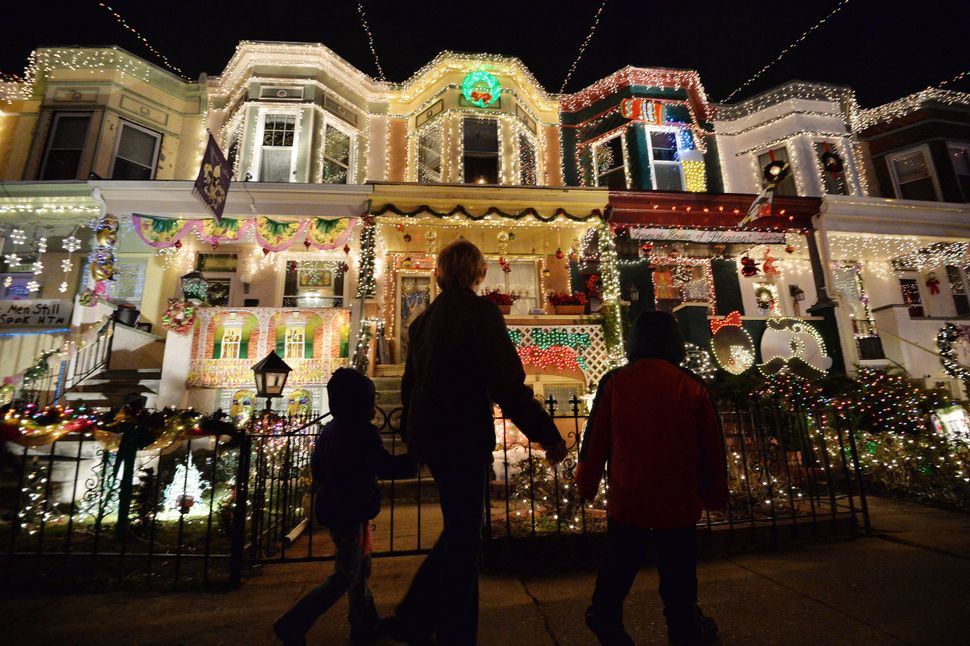 Lying on my living room floor in pain, surrounded by the pile of my daughter’s stuffies that broke my fall, I came to two realizations: 1) sofas don’t make good stepladders, and 2) Jews are just not built to hang holiday lights.

For the first time in my life, I was decorating my place for the holiday season. Our daughter Evyn had just turned three and was really getting into the holiday spirit, yelling “Christmas lights!” every time we passed a well-decorated house, or staring at the tree at a friend’s house. Every night after we picked her up from daycare, she commanded us to circle the block before we turned in for home, looking for the house that put lights up along a Y-shaped tree, fascinated to see part of her name glowing in the form of multicolored LEDs.

Because of this, my wife Rachel and I didn’t have the heart to see her come home to a dark condo just because we don’t celebrate Christmas. It’s a fact of life about being Jewish – even for people like us who are not the most religious Jews: When Christmas comes, you can get into the spirit, admire the lights, sing “Christmas Wrapping” and visit the tree at Rockefeller Center, but when it comes to your own home, things had to be as stark as a January blizzard.

I’ve always had an uneasy relationship with the holiday season. Growing up in a town in Northern New Jersey that had very few Jewish families – despite being surrounded by towns that did – I always hated that I had to celebrate Hanukkah instead of Christmas. When December rolled around every year, I was inundated by reminders that I was different from just about everyone else in my class. The downtown was decked in wreaths and lanterns; in our music class we sang carols of all kinds – including religious ones; my classmates sat on Santa’s lap at Willowbrook Mall. Every year, I’d get questions about Hanukkah and how I felt about not celebrating Christmas; I felt like an exhibit at some sort of racially-insensitive museum.

But the thing that got to me the most was when I’d be in the car at night and we turned the corner onto our street. Every house was lit up, the blinking, multicolored incandescent bulbs that were prevalent in the ’70s and ’80s blazing away. Some houses were more subtle, with a string of lights hanging from the gutters, others had Santa’s sleigh landing on the roof. When I saw the homes that had their trees on display in big picture windows, I thought of the warmth of the crackling fire, stockings hanging over the mantle, wrapped gifts under the tree and envisioned opening gifts on Christmas morning.

When we got to our house, though, it was dark. If it was Hannukah, there was a lonely electric menorah in the living room window, but if it wasn’t, there was no light to be seen. It was a signal to the rest of the neighborhood that we were “the other,” a palpable feeling for me and my brother, who experienced a daily dose of low-grade anti-Semitism at school.

The lack of decorations also made our house feel cold and uninviting, a feeling that wasn’t helped by the fact that my dad basically stayed married to my mom because he felt she was incapable of taking care of us alone. My dad was a controlling sort, who never seemed to be satisfied with either his situation in life, how my mom made his dinner or how well his kids did in school. This also extended to the holiday season; no lights, no hanging dreidels, and no gifts after we were bar mitzvahed, as he felt it was a kids’ holiday.

I don’t want that for Evyn. First, I’m an ambivalent Jew to begin with. While my wife and her family do things like light candles on Hanukkah to keep family traditions alive despite not being religious, I couldn’t care less about any of that. I’m just not into organized religion and haven’t been for decades (my upbringing as “the other” in my town likely has a lot to do with that).

Second, we haven’t been able to figure out what kind of exposure to Judaism we want to give our daughter as she grows up. She’s not Jewish by birth; we adopted her when she was a month old, and she’s Jamaican-American. We’re not sure it’s a given that she should be raised Jewish, especially considering how tenuous our connections to the religion are. We also don’t want her to be resentful that she can’t experience the holidays her friends are, just because her parents reflexively told her she couldn’t. 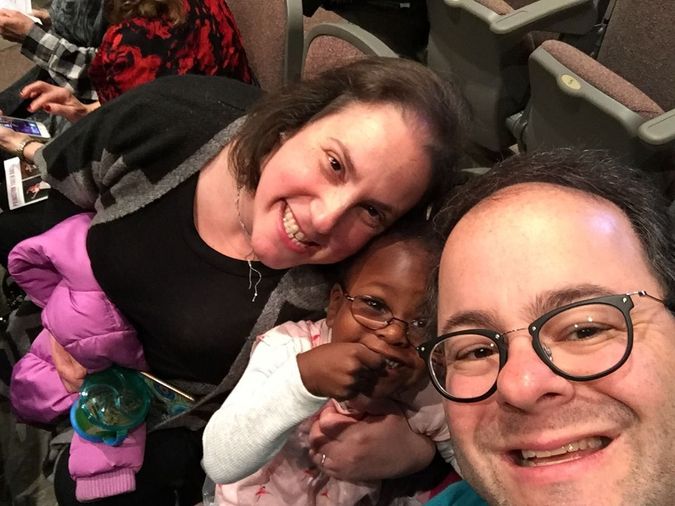 The Kellers at The Nutcracker.

But we also can’t go full-on Christmas in our house. There’s just too much family history that would be betrayed if we put up a tree or put an Elf on the Shelf. Even if I called it an “American Non-Denominational Christmas” and not the celebration of baby Jesus, it just wouldn’t feel right. Even the notion of a twig-shaped, Charlie Brown-style tree would make my mother-in-law’s heart break and my grandmother turn in her grave. So that’s out of the question.

So when I encountered some decorations at my local Target that I thought would be appropriate – blue lights, flashing LEDs, blue and silver pom-poms – I bought an armful of them and brought them home. It was only when I slipped off my couch and almost broke my foot did I realize that I had never mounted lights before.

When Evyn got home from daycare that night, though, she oohed and ahhed at the lights. The three of us sat in the dark for awhile, enjoying the lights and the warmth they gave our living room. Yes, I fell off the couch and twisted my ankle, but I gave my daughter a festive home for the holidays.

Joel Keller is a writer from New Jersey whose stories about entertainment, food, parenting and tech have been published in The New York Times, VanityFair.com, Playboy, Parade, Variety, FastCompany.com and elsewhere.

Why Christmas Lights Fill This Jew With Joy — And Dread