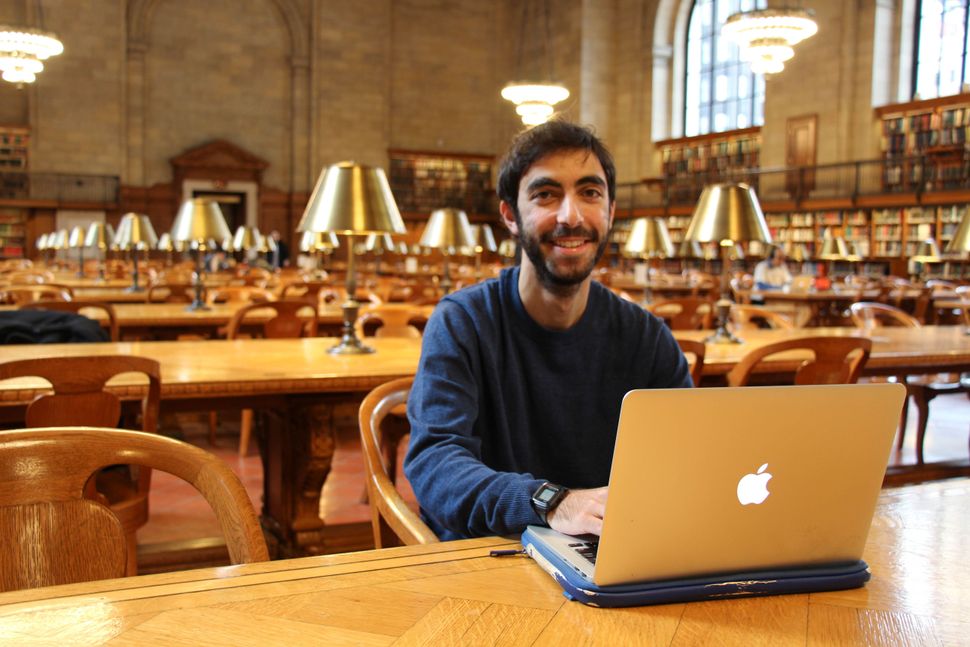 Hope is not easy to come by these days. Unless you know where to look. Ari Satok did – in the unlikeliest of places.

Three years ago, the 22-year-old Toronto native spent a year traveling the world, visiting United World College schools in British Columbia, Wales, Hong Kong, Germany, the Netherlands, New Mexico and Swaziland. Founded in 1962, United World College is a network of 17 schools located around the world aimed at creating an international community of high school students coming from more than 150 countries and from all socioeconomic backgrounds.

“There is a tremendous power to having young people live in a community with each other. We all have stereotypes that we hold onto; they are born out of the media, out of second-hand narratives,” Satok said. Working on his senior thesis in sociology for Princeton, he interviewed some 150 students and last year published a book of poetry based on 16 of those: The Architects of Hope: Sixteen Young People Dreaming of a Better Future.

The characters of The Architects of Hope come from different places and backgrounds, but they all share a sense of hope regarding their future – the theme of the book. “Hope … speaks in all languages and cultures,” Satok wrote in the introduction. “It is hope that hums, even if sometimes in the face of great pain, in the beautiful web of stories, traded each night in a Gothic dining hall in a castle on the sea, where all things seem possible.”

There is the story of Kainat, one of the Pakistani girls who was shot with Malala Yousafzai and Shazia Ramzan on a school bus in 2012. The bullets that had pierced them/ With the purpose to suppress/ Had instead given new power/ All three girls would now possess.

There is Elias, a boy from Burundi who grew up as an orphan in refugee camps in Tanzania and Malawi, dreaming of traveling, not as a refugee but as a “voyager.” A rest stop for the weary/As he climbs/From the depth of his memories/To the heights of his dreams/That float just beyond his reach.

There is Nana, a young man who moved from Ghana to France, but never wants to forget his past and his identity. And there is Sibia, a bright girl from Guatemala, who surprised her community by making it to the final round of a national science contest three times in a row.

Sibia described the feeling of reading her own story in Ari’s verses as “having a cup of warm coffee milk back in Guatemala.”

“Hope is a word that for me represents the trust that dreams can become true,” she said via email. Four years ago, Sibia left her home in Guatemala. She met Satok during lunch at the Canadian school of UWC. “He’s a great listener. I shared with him my aspirations, the challenges of growing as a female student, the corruption of the educational system in Guatemala.”

Now Sibia is attending college in the United States and studies visual arts, focusing on ceramics. 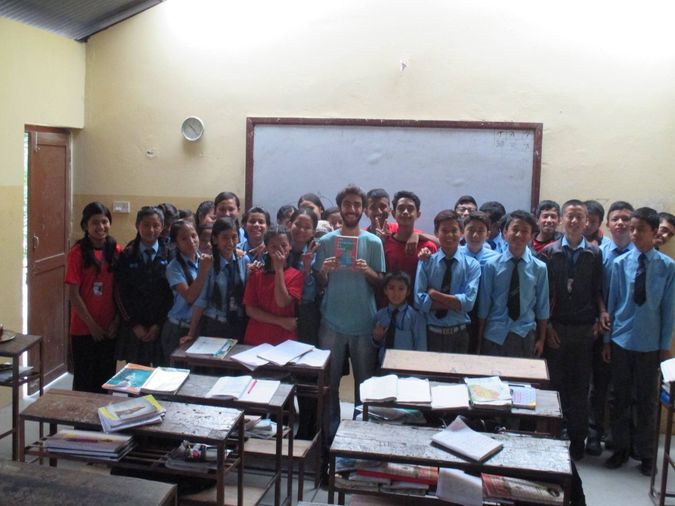 Ari Satok with a group of Nepalese students after a book talk. Image by Ari Satok

“I was inspired by other storytelling projects, like Humans of New York,” Satok said. Raised in a traditional Jewish home, the middle of three children – a Hebrew teacher mom and movie booking agent father – Satok has been passionate about storytelling since he was a kid. He started writing poetry early and in middle school, he gave his student council speech in poetry verse.

“When he spoke, Ari could have the room totally engaged for an hour,” said his friend, Justin Cuperfain, in a phone interview from Toronto. “Everyone in the room felt like they were the only person he was speaking.”

Satok always loved writing. One day, in eleventh grade, his teacher told his class: “Dazzle me.” She wanted the students to push themselves further with their writing. Satok took her at her word. “It was the first time that I felt really pushed to make my writing the best it could be,” he recalled in one of our several meetings in New York.

New York was a natural destination for Satok after traveling the world. He wrote his collection at the Schwarzman Building of the New York Public Library and in other Manhattan atria. Now he is promoting the book and working on a new poetry collection about the journey into young adulthood. He also leads a weekly workshop in a seniors’ residence, where he helps a group of elderly people find their voice in their stories.

It reminds him of his first radio journalism class at Princeton his freshman year – which he sat in by accident. For the first assignment, the professor asked him to interview the person sitting next to him.

“We all realized we were in a room full of amazing stories to tell … stories that we usually never access,” Satok recalled, then deciding to stay in the class.

Journalism is a passport to step into worlds that otherwise you’d never step into, the professor taught. “It got me excited about what kind of doors could be opened with a recorder, a notebook, your curiosity,” Satok said.

In 2011, he interned in Colorado at a school for kids who struggle at succeeding in traditional high schools. Although his responsibility was to organize event programming for the students, he ended up designing a storytelling project called “Voices of Resilience,” creating a series of audio pieces using the stories of some of the students at the facility. He encouraged the students to create their own work to share their stories of resilience.

“It was like a paradise for storytelling,” he said. One of the students had spent time in jail and was father to a child; he was determined to build a new future for himself and for his son. “It was a powerful interview.”

His next challenge is to bring people and groups in conflict closer together through storytelling. He wants to teach them how to tell their stories, and how to listen to the other’s stories. “I want them to know each other, to learn each other’s stories and build friendships.”

Simone Somekh was born and raised in Turin, Italy. He has worked with publications based in Milan, Jerusalem, Tokyo, Berlin and New York. He is currently pursuing an M.A. degree in Journalism and European & Mediterranean Studies at New York University. Follow him on twitter: @simonsays101