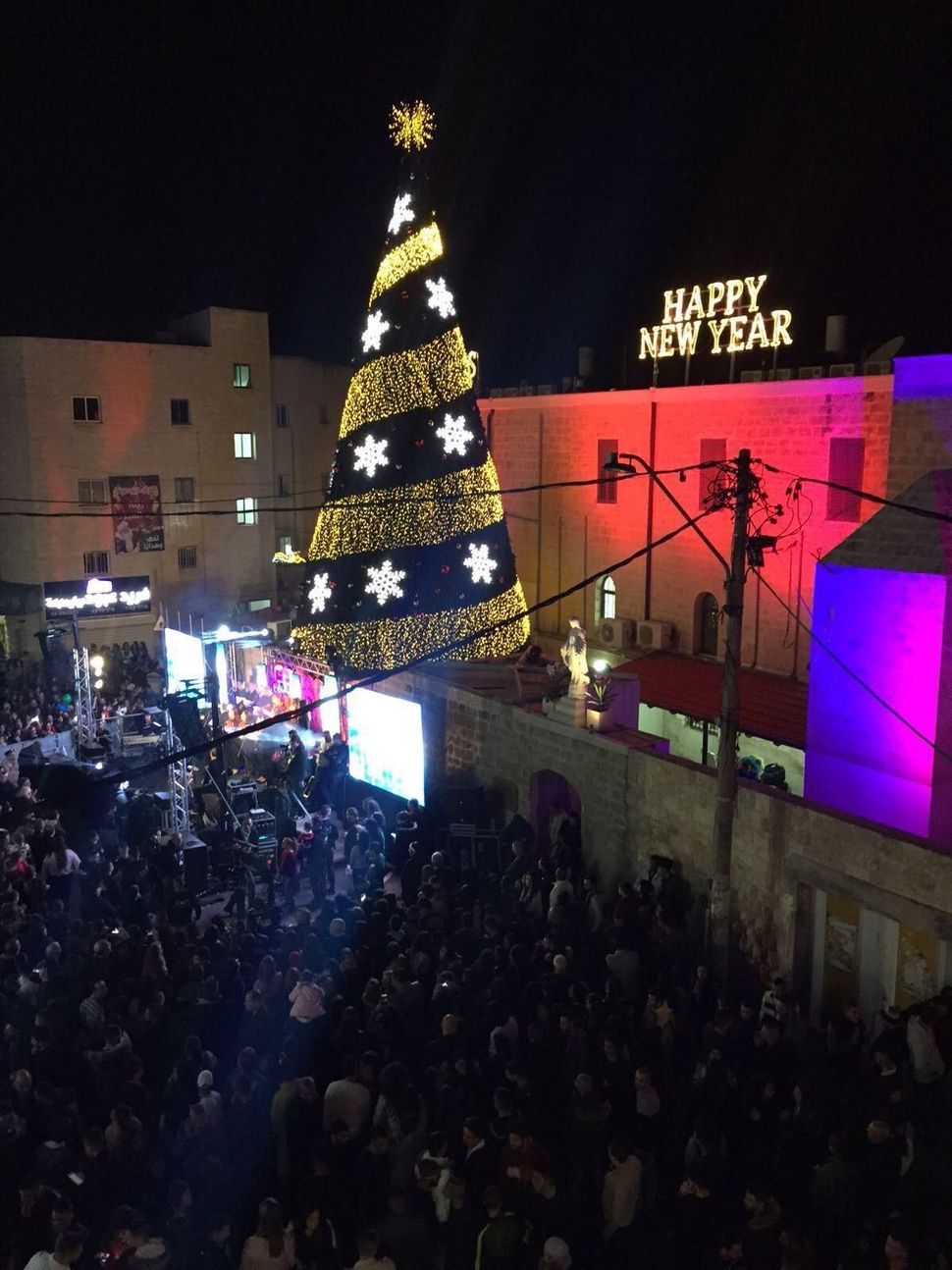 Shira Greenblatt, a secular Israeli Jew who was born and raised in Jerusalem, loves Christmas. “Every year I attend Christmas services at the Dormition Abbey on Mt. Zion in Jerusalem, and I will go again this year, too. It’s very special to learn about Christianity here, in Jerusalem. And I love the lights, the songs, and the majesty,” she enthused.

Greenblatt, 42, a secretary, is one of the thousands of Israeli Jews who attend Christmas festivities and religious services throughout the country. Christmas in Israel has become so popular that even Go Tel Aviv, a hip city guide, is offering an edition of The Five Top Places to Celebrate the Holiday Season in the Holy Land. “There is nothing like a beautiful Christmas tree to get into the atmosphere of the holiday season,” the guide advises, citing some of Israel’s best-lit trees and most inspiring masses.

In towns with a Christian majority, mostly located in northern Israel, Christmas is a public holiday. The Jewish National Fund provides Christmas trees for NIS 80 (about $23.00), and the Jerusalem municipality provides lighted decorations, “in areas where the holiday is observed,” according to a municipal announcement, referring to non-Jewish neighborhoods.

But for most Jewish and Muslim Israelis, Christmas is just another workday, with no religious, social or commercial impact. That suits some people just fine. “As an observant Jew who grew up in New York City, I am delighted that I don’t feel Christmas here,” said Benjie Cohen, 43, a businessman who lives in a religious neighborhood in Jerusalem. “Christmas shouldn’t be observed in the Jewish state.”

But many Israelis do not agree. “My grandparents, who came from Poland, are upset that I go to the Christmas service at the Dormition Abbey every year. They have terrible memories about Christmas,” said Matti Koller, 31, a Hebrew University student. “I don’t have any of those hang-ups. Judaism has its own simple beauty, but I love knowing about other religions, too.”

The Dormition Abbey holds a service in German (the Benedictine vernacular) earlier in the evening for its own parishioners, and invites the Jewish visitors for a midnight service held mostly in English, with some Hebrew.

“I probably have the distinction of being the only priest in the world who delivers a Christmas sermon to a mostly-Jewish audience,” said Father Nikodemus, a Benedictine monk at the Dormition Abbey, who’s in charge of the Christmas service. He estimates that about 1,000 Jews attend. 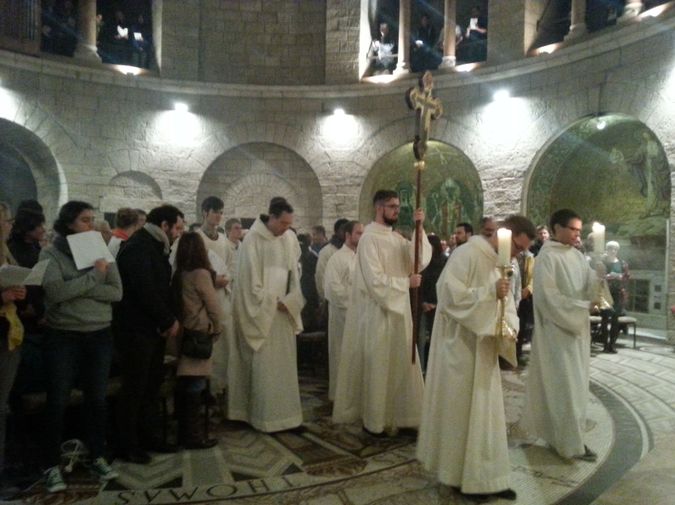 Monks filing into the service at the Dormition Abbey in the Christmas procession in the mostly-Jewish Israeli congregation. Image by A Window On Mt. Zion

In fact, there are so many visitors, that the “Window on Mount Zion” project, part of the non-profit Jerusalem Intercultural Center, enlists and trains dozens of Jewish volunteers to act as ushers at the service.

He believes for many of the Jewish visitors, the hymn-singing is the height of the service. “They especially love to hear ‘Silent Night,’ sung in German,” he says. “I actually think it’s a bit kitschy – but if they like it, then we can sing it.”

Nikodemus is aware that Jesus can be difficult for Jews. “Christianity was not kind to the Jews. So every year, I say the same thing: I have no intention to missionize. I merely want to share our joy at the birth of Jesus. I know that most of the people in my church do not believe that Jesus is the son of God and the Messiah. But at least we can all agree with something Jesus said: ‘Love God and your neighbor as yourself.’”

After the service, at about 1 am, the monks invite the participants to a reception in the Abbey, with traditional Christmas cookies and candies.

“I am thankful to the Benedictines for inviting us,” Greenblatt said. “It’s terrible that because we are the majority, we ignore Christmas, which is so important to Christians here and throughout the world. The only thing we know about Christmas is from TV and movies. I want to learn first-hand.”

A few other Jerusalem churches open their doors to Jewish visitors on Christmas Eve, although many have limited their numbers, because “there were so many Jewish visitors that there wasn’t enough room for the members of our own congregations,” said a Protestant church official who asked not to be identified because “he didn’t want to offend the Jews who show an interest in Christianity. But there were just so many of them!”

The YMCA in West Jerusalem sponsors an annual Christmas Eve concert and a Christmas Bazaar, each of which is attended by hundreds of people, and its brightly lit tree is also a big attraction. “I bring my children here to see the tree every year,” says Merav Armoni, an elementary school teacher. “I love the colors, the excitement, the lights. Everything in Israel is so Jewish, just looking at the tree feels like I’m in Europe.”

“Jerusalem is the most international city in the world,” says YMCA director, Amos Gil. “We are proud when we help members of one religion learn about the others.”

For others, Christmas provides an opportunity for Jewish-Arab coexistence activities. The NGO Shared Tourism, for example, organized over a dozen tours to Shefar-Am, an Arab city in the Galilee. According to Noam Horowitz, Program Director for Shared Tourism, more than 800 people – almost all of them Israeli Jews – attended these events, which included visits to Christmas markets and local churches (and even an interfaith candle-lighting ceremony during Hanukkah in the ancient synagogue in Shefar-Am.) 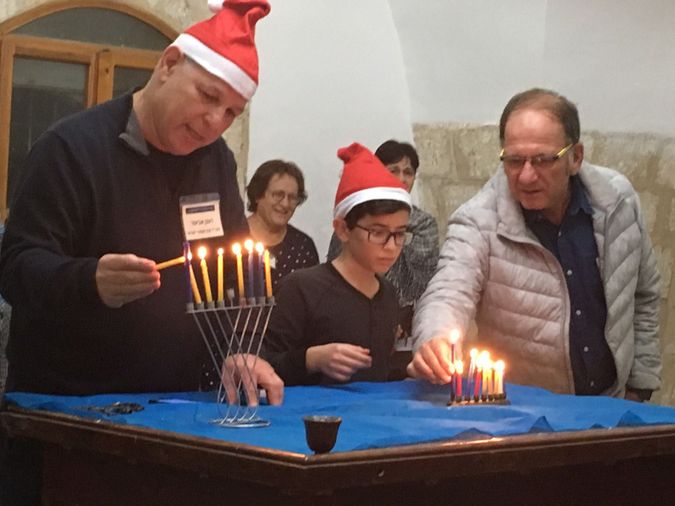 An interfaith candle-lighting ceremony in Shfar’am. Close to 800 Jews participated in the Christmas tour by “Shared Tourism,” a joint Arab-Jewish venture in the Galilee. Image by Shared Tourism

Hana Bendcowsky, a tour guide and program director of the Jerusalem Center for Jewish – Christian Relations (JCJCR), an interfaith Jerusalem-based NGO, laments that for many Israeli Jews, the “the attraction of Christmas is the feeling that they are abroad, enjoying churches and Christmas markets.” Despite that superficial pleasure she believes it can “lead to curiosity and to greater familiarity with the Christians who live in Israel.”

The rabbinic establishment sees things differently. Each year, the rabbinate issues a “reminder” to hotels and restaurants to “avoid hosting parties to mark the end of the secular year.” Until 2015, kashrut inspectors could even revoke the kosher certification from hotels and other establishments if they displayed a Christmas tree or sponsored a New Year’s Eve party. (In 2015, under public pressure, the rabbinate disallowed this policy.)

And last year, the rabbi of the Technion Institute of Technology in Haifa forbade students to enter the student union building due to a Christmas tree placed there. Writing on a website geared to the national-religious community, Rabbai Elad Dokow described the tree as an “attack on Jewish identity,” and added, “It is not a Christian religious symbol but, even worse, a pagan one.”

“There’s a lot of anti-Christian sentiment in Israel, and especially in some of the religious establishment,” said Dr. Deborah Weissman, author of Memoirs of a Hopeful Pessimist and consultant to the International Council of Christians and Jews. “Some of our religious leaders act as if we still have to be fearful of the Christians,” she said, because of the years of persecution. “But those days are long gone.”

“Secular Israelis – even those who would never step into a synagogue – are open to other religions,” Weissman said, noting that it’s not assimilation but coming from “the security of living in a majority culture.”

Israeli education should include lessons on Christianity and Islam, she said. “After all, Jesus was the most famous Jew of all time, and we should be secure enough to appreciate his teachings, even though we do not see him as the Messiah.”

“The rabbinic establishment in Israel is living in a time-warp,” Rosen said, pointing out the ridiculousness of the rabbinate and other religious officials calling New Year’s Eve Sylvester, since the day originally marked the day of the death of 4th century Pope Sylvester.

“The only Sylvester I knew about when I grew up in England was the cartoon character that chased Tweety-Bird.”

“I’m delighted that Israeli Jews are interested in other faiths. Indeed, the entire Jewish world needs to seriously reevaluate its relationship to Christianity,” Rosen said. “And what better place than in the State of Israel – where we are a majority and no longer victims?”