Miriam wiped the sweat off her brow in layers of heavy silk kimono woven with delicate pastel and bright red flowers. I could barely recognize my twenty year old daughter out of her baggy sweater and modest, flowing skirt. Here she was, dressed for her Seijinshiki, the Japanese Coming of Age ceremony, clip-clopping in her white toe socks and zori sandals along the cobblestone streets of unseasonably warm Jerusalem.

After 30 years in Japan, living a productive life as a journalist and artist, I had decided over the summer to move to Israel. Though poetically beautiful, Japan didn’t feel like home to me anymore. Especially after marriage and two children, I began to question how to give my children a modicum of Jewish identity in a city of 35 million — when only a few hundred scattered around Tokyo were active Jews.

Standing by Miriam’s side was what appeared to be another mirage: her proud Japanese grandmother adjusting a crease in her butterfly-shaped obi, which Hiroko had spent more than an hour wrapping several times around Miriam’s waist. She knotted this sash onto Miriam’s magnificently brocaded back. 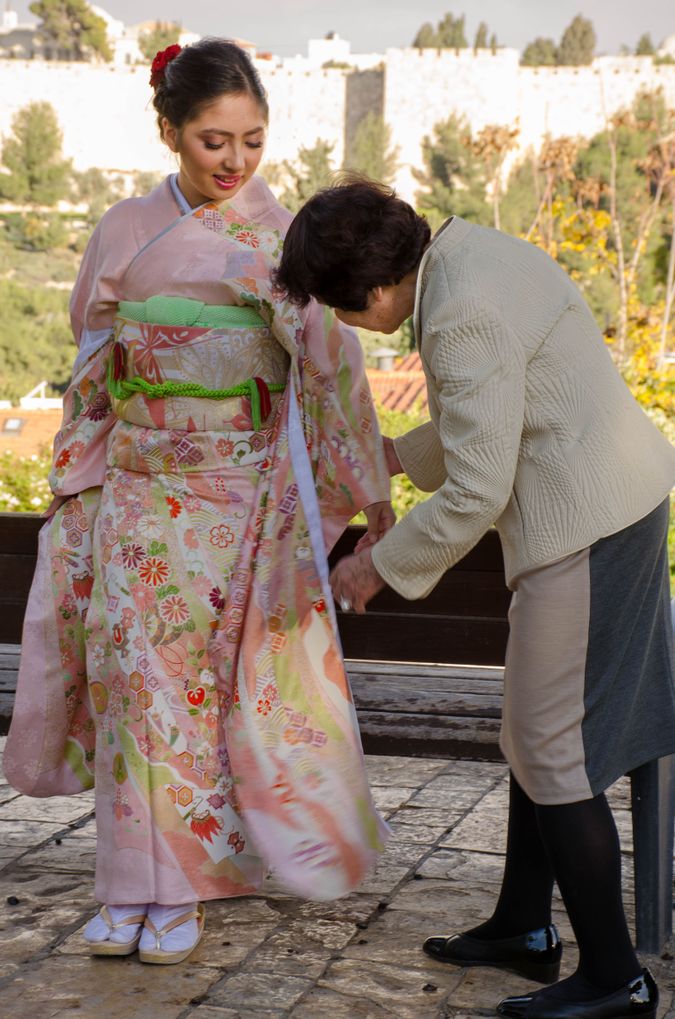 I just had to hope that my mother-in-law, Hiroko, 83, would stick to talking about kimonos and not about my separation from her son Aki, and the impossible task of convincing us to live in the same country. Aki, a property manager in Japan, had declined my invitation to come to Israel, but over time gave us his blessing.

For Hiroko, moving to Israel had potentially disastrous implications aside from splitting the family apart.

“What about her Miriam’s Seijinshiki?” was one of Hiroko’s first questions, since she had been planning Miriam’s debut in a kimono for a year prior to the January 8 date of the ceremony. “Miriam is so looking forward to this big day in her life. You know, it’s a package deal. I’ve paid for the photographer, makeup artist and salon. The works.”

“Can’t you cancel it?” I suggested over the phone from Israel, when I announced I was not returning to Tokyo.

“I don’t understand why you care so much about being Jewish. There are hardly any Jews in Japan,” my mother-in-law shot back.

When Miriam, the elder of my two children, entered first grade, I had started baking my own challah for Shabbat. This was the first step in a journey that led me to becoming a regular at Tokyo’s two Chabad Houses and gradually to an Orthodox way of life I had never known before. I learned their ways at one holiday gathering after the other. Fortifying my Jewish practice in Tokyo meant frying latkes in the kitchen while my mother-in-law unpacked the take-out sushi.

I was ready to make aliya when Miriam, and Hillel, who was entering high school, were still young enough to come with me willingly. In Israel they would experience the ease and pleasure of keeping kosher and observing Shabbat in Israel after toughing out these mitzvot for most of their lives in Japan.

I didn’t know why my mother-in-law was making such a fuss over Seijinshiki. It only became a national holiday after Japan’s defeat in World War II. Lavish kimono brought much needed cheer to a devastated nation drained of color, but the national dress was in such short supply that even my mother-in-law was hard pressed to remember what she wore for the occasion.

Still, it was so important to Hiroko that she was ready to do whatever it took. She would make sure Miriam transitioned into adulthood in a kimono — even if it meant doing so in Israel and staying in my home.

Hiroko hadn’t renewed her passport since her husband passed away from cancer five years ago. She had made a new life for herself as a teacher of tanka poetry and an active member in the daily morning meetings of Rinri, a nationwide ethical group that encouraged its early-rising members to gather each day at the crack of dawn to discuss ways to promote family harmony.

Whatever residue of fear and upset my mother-in-law had before I left, she magnificently overturned in one sweeping gesture—her resolve to visit Israel.

My mother-in-law practiced for the trip to Israel as if it were practically a test. Her fears were gradually eradicated by watching YouTube tutorial after tutorial in order to learn the kimono-dressing art that she had taken for granted in Tokyo because it was so easy and natural to head over to a salon whenever the need arose to put a kimono on. Good to her word, Hiroko and Aki crossed borders and datelines to keep on Shinto schedule.

My mother-in-law was determined to make Miriam’s Coming of Age in Jerusalem a unifying occasion for the entire family.

With her hair freshly set and dyed, wearing a beautifully tailored cream Jacquard jacket over her dark polyester pants, Hiroko arrived in the middle of the night, wheeling in her suitcase both a kimono folded like origami and a 12-foot-long obi sash. 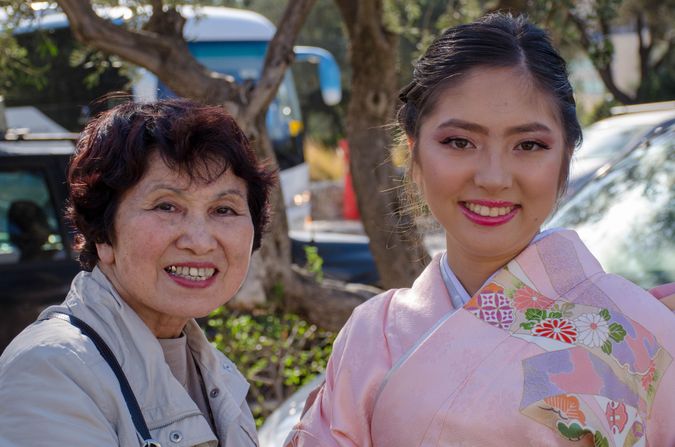 Miriam and her grandmother. Image by RuthEsther Fine

“If Miriam had followed the Seijinshiki tradition in Japan for young women turning 20, we would have gone to visit our family’s Shinto shrine to offer prayers of thanks, but as my mother-in-law surveyed our new Jerusalem digs and the windmill outside our kitchen window, she quickly added: “I never imagined I would have this great chance to come to Israel.” She must have learned something in those early morning gatherings. These were the heartfelt words that I needed to hear.

In Jerusalem, my mother-in-law allotted half her time for the week of her visit to sight-seeing around the Old City. The other half Hiroko spent practicing her kimono-dressing skills. She began the same way each day: by placing a soft sash under Miriam’s bust — necessary for making the taut narrow tube of a kimono silhouette.

When the big day came, Miriam spent four hours in Emek Refaim, the historic district of Jerusalem where German Templars brought a unique stone-cottage style to the area. They beautified their legacy in between houses with blossoming trees and fragrant gardens that exist till this day. In the most unlikely of kimono-dressing venues, Sagit’s Place, a cavernous basement luxury spa in a 130-year-old Templar house, Grandma Hiroko unpacked from her suitcase a Mary Poppins-like collapsible rod designed to hang the kimono.

Moran, a hip Israeli make-up artist and hair stylist, thickened Miriam’s eyelashes to look soft and beautiful. While Miriam’s lips were lacquered bright pink, her grandmother looked on approvingly in the reflection of the salon mirror.

Next it was the octogenarian’s turn. A 90-minute marathon kimono-dressing began with Hiroko helping Miriam change into a plain muslin-fabric kimono underdress base. Grandma layered on the heavy brocade kimono, adding a complexity of spring green, coral and gold sashes, knots and tasseled accessories that transported her granddaughter back to the magical country where she had been born and raised.

Hiroko can sleep easy knowing that Japanese tradition is alive and well on Jerusalem soil. 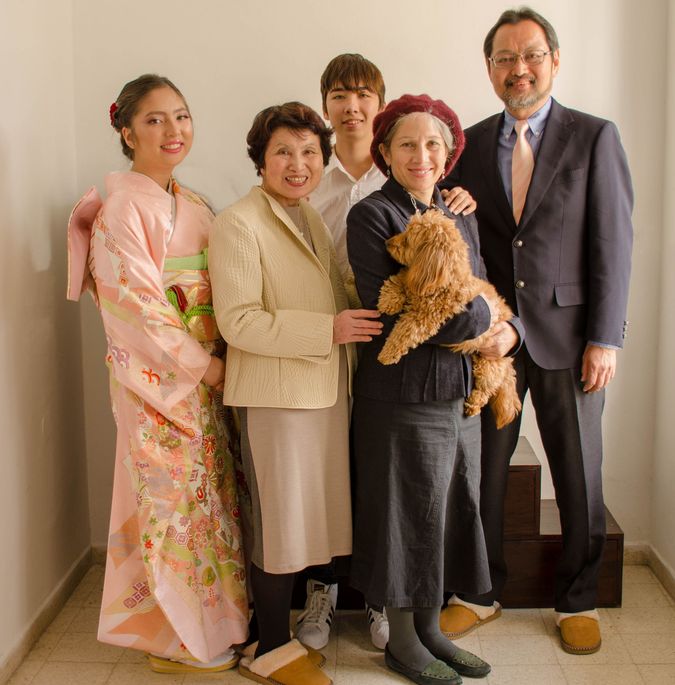 As for Aki and me, there is a poetic expression in Japanese — ”mono no aware,” to do with the awareness of the transience of things, and I think it applies to Miriam’s Coming of Age Ceremony: there was a gentle sadness that the photographs taken of one happy family in a week-long stay in Israel were capturing but a fleeting and highly choreographed moment.

We are separated, but forever our children’s parents. I’ve discovered that that their Jewish-Japanese identities will bring us more chances, rather than less, to come together for lovely, healing occasions.

Liane Grunberg Wakabayashi was a Tokyo-based writer and artist for thirty years. She recently made aliya, lives in Jerusalem, and is working on a memoir about her transition to Orthodox family life in Jewish Japan.