How The Notorious RBG Uses Fashion For Political Statements 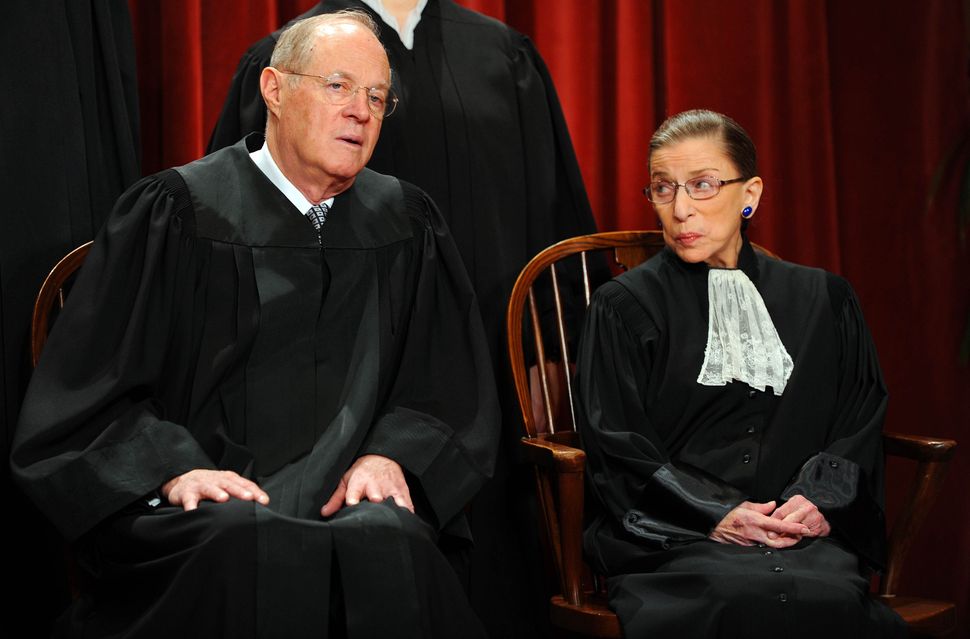 On November 9, 2016, members of the United States Supreme Court met, wearing their somber black robes. But fastened around Associate Justice Ruth Bader Ginsburg‘s neck was something different: a beaded, scalloped necklace that she wears on those days when she cannot express her dissent verbally. This necklace is infamously known as her dissent collar.

RUTH BADER GINSBURG WILL BE IN CONVERSATION WITH JANE EISNER TONIGHT, FEBRUARY 1, CLICK HERE FOR ALL DETAILS AND TO WATCH THE LIVESTREAM

RBG’s dissent collar is unique in that it’s not even a collar at all, but a statement “bib-style” necklace. Earlier this decade, statement necklaces were a “thing,” and everyone was making them — from high- fashion brands like Lanvin to mass market retailers like J.Crew (on the higher end) and Banana Republic. And although we can’t confirm this, since cameras are not allowed when the court is in session, news reports at the time seem to indicate that the “collar” came from Banana Republic by way of Glamour magazine. The bib-style sparkler (glass beads on a black scalloped base) reportedly came in the VIP gift bag at Glamour magazine’s “Women of the Year” gala in New York, where Ginsburg was among the honorees.

When it comes to judicial collars in the American federal courts, there is no set standard. For men, most simply wear a collared button-down paired with a tie (or, in some cases, a jaunty bow tie). But because the first woman was not appointed to the federal bench until the mid-20th century, women were able to chart their own sartorial path.

As JoAnn Klimkiewicz notes in a 2005 piece in the Hartford Courant, “As the first women to sit on the bench, it seems, they had carte blanche on how to distinguish themselves from their male counterparts.”

The debate over Supreme Court fashion dates back to the early years of the republic. In the high court’s first session, on February 1, 1790, the first order of business was to answer the question of judicial attire. Thomas Jefferson was vehement in his opposition for any trappings of English monarchy, saying that judges could do without “any needless official apparel,” especially “the monstrous wig which makes the English judges look like rats peeping through bunches of oakum.”

And so the simple, morose black robe became the traditional garb of American judges — a tradition broken by former chief justice William Rehnquist, who added gold stripes to one arm of his robe because, as former justice Sandra Day O’Connor wrote, “he had recently seen a Gilbert & Sullivan opera in which the lord chief justice wore a robe with gold stripes.”

The black robes and collared shirt is a repudiation of the excesses of Old World Europe — of its pomp and circumstance, of its elitism and aristocracy.

Which is why Ginsburg’s choice to wear the jabot — let alone have an entire closet full of different kinds of jabots — seems odd, especially given her commitment to upholding democratic and progressive values. When Ginsburg was appointed as an associate justice in 1993, her first collar was modeled after a true jabot — a flat triangle of white cloth similar to the jabot worn by French justices in court.

Even though the froufrou of the jabot may reflect the elitism and aristocracy of Europe, Ginsburg’s jabots may represent democracy — her right to freedom of speech; or, rather, her right to speak without speaking. Ginsburg often turns to her collection of jabots to speak for her — the golden, crocheted jabot when she reads the majority opinion; her “favorite” white-beaded jabot that she purchased in South Africa; the white sailor-style jabot that she bought in the Metropolitan Opera gift shop.

Clothing has long been used by the feminist movement to make a statement. From bloomers to pantsuits, women have long understood the power that clothes can lend to the development of a movement, of progress. Clothing is a visual statement — a statement that, long after the speeches and slogans have faded from memory, remains unsullied in photographs.

It is interesting that in a year defined by female empowerment, where women’s voices are finally being heard, women still choose to express themselves in silent protest through their clothes. From the white pantsuit of the 2016 Democratic convention, to the bright-pink pussyhats at the Women’s March, to the sea of black gowns at the Golden Globes in honor of #MeToo, women express their silent protest with the clothes that so often define them.

On Tuesday night, during President Trump’s State of the Union address, female Democrats wore black to express solidarity with the #MeToo movement. Melania Trump wore a white pantsuit — a look that many interpreted as a feminist move.

But, as Mattie Kahn at Elle.com noted, “fashion amplifies a woman’s voice. It can’t provide one for the woman who has nothing to say.”

This is the embodiment of Ginsburg. Unlike the first lady, her clothes — specifically her judicial collars — make a real statement, one that amplifies, visually, her dedication to civil rights and her unyielding principles.

It’s not that Ginsburg cannot express herself — she has been described as tough and outspoken, as a firm and vocal defender of civil rights. Her reputation for staying true to her principles is reflected in the way she broke, in the 2012–2013 term, “”a half-century-long record among all justices. Her dissent in the voting rights case was the last and most furious,” according to Irin Carmon and Shana Knizhnik in their biography, “Notorious RBG: The Life and Times of Ruth Bader Ginsburg”.

To take the comparison between Melania Trump and Ginsburg further, the first lady’s supposedly feminist statement comes by way of Dior; Ginsburg’s is significantly more democratic: It’s a statement necklace by way of (a very accessible) Banana Republic.

The collar is also — like many of Ginsburg’s collars — distinctly feminine. The fact that the collar she uses for dissent has an inherent femininity — it is, after all, a necklace — is a statement in and of itself. To dissent is to be confident and standing one’s ground in a “man’s world.” But to wear a necklace as a sign of dissent says, “I’m strong not in spite of my gender, but because of it.”

How The Notorious RBG Uses Fashion For Political Statements