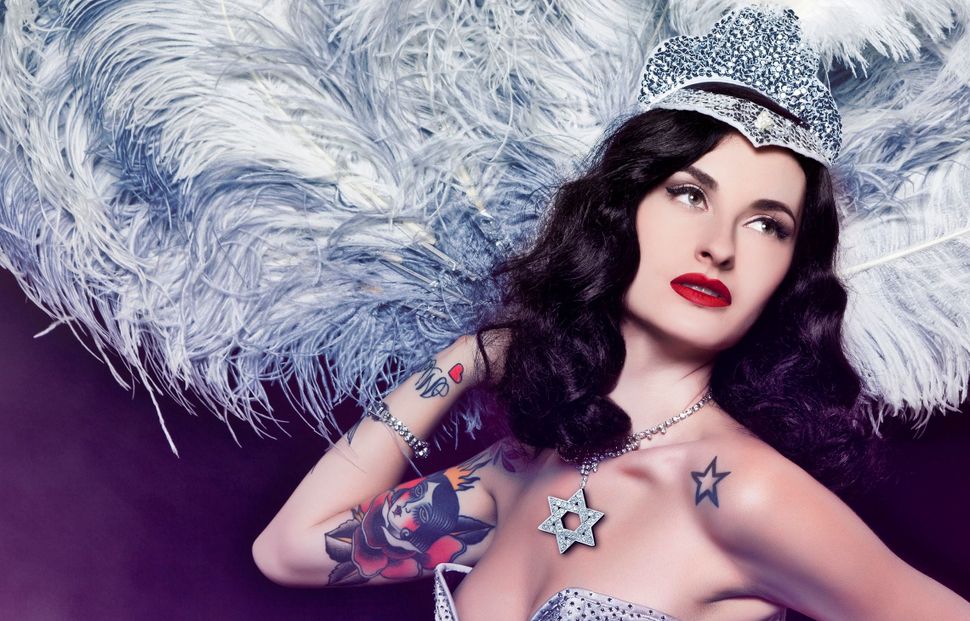 I could feel sweat dripping down every crevice.

For my burlesque show, Nice Jewish Girls Gone Bad, I was cloaked in a Hasidic costume, a man’s full itchy wool suit, fake payot, and a fur hat — all soon to be ripped off, minus the Star of David pasties. As I stepped on onto the stage at the Red Devil Lounge in San Francisco, instead of looking out toward a sea of blackness, the venue’s intimate setting meant seeing the audiences’ faces. The last time I was in front of this many Jews was my bat mitzvah.

I was beginning to regret the whole thing. 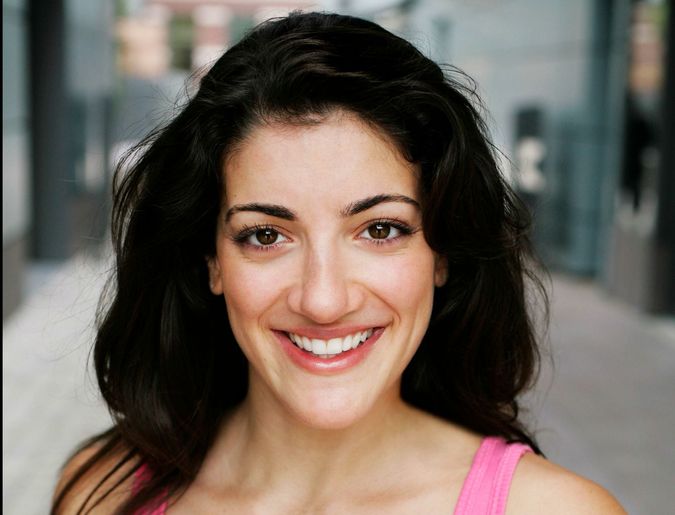 The author Image by Betsy Farber

When I’d called home to share the news I was going to be stripping in a burlesque show called ‘Nice Jewish Girls Gone Bad’, my parents weren’t that disappointed. Before they had children, my Reform father insisted my non-religious Protestant mother convert to Judaism. My mother was a retired ice skater who taught aerobics and blasted Johnny Mathis Christmas records during the holidays. She entered me in beauty pageants and has never once pressured me to get married. My father was president of Temple Israel in Omaha. Before that, his father was president of Temple Israel. At first, my dad’s traditional Jewish mother, who only wore Chanel No.5 and forbid stacking dishes while clearing the table, balked at his gentile choice.

Yet thanks to my parents’ identity mashup, being Jewish was a part of me, but not all of me. At synagogue, I enjoyed following along in Hebrew during services. From a young age, I had a deep affinity for fried onions, Mel Brooks, and over-analyzing everything. But most of my close friends weren’t Jewish. I had cousins, friends at Hebrew school, and a fellow camper the one summer I went to Jewish sleep-away camp tell me I wasn’t really Jewish because my mom converted.

In high school, I had a terrible crush on a kid from the all-boys Catholic school who told my best friend, “I like Betsy, but she’s a Jew.” Ouch. I had no idea that being Jewish was what defined me. Instead of confronting the little punk with a brazen tongue-lashing, I retreated to feeling less-than.

So when I came across the Craigslist post, “Seeking two Jewish burlesque replacement dancers for variety show,” it felt like the typecasting Gods had called. Living in New York City, my life was filled with auditioning during the day, waiting tables at night. I was 28, and had been going to professional auditions since age 20, and the whole dance scene was taking its toll on me.

“You’re not tall enough, blonde enough, thin enough, black enough, ethnic enough, you look too ethnic,” they told me. I was used to rejection and even as an adult, my identity seemed to straddle a fence to everyone but me.

Burlesque, by definition, felt similar to my own muddled existence: an absurd or comically exaggerated imitation of something, a parody.

In elementary school, thanks to my mother showing my sister and me old movie musicals, I discovered Natalie Wood as the mesmerizing burlesque star in “Gypsy.”

“Do you know what ecdysiast means?” Wood titillated the audience behind a red curtain, as Gypsy Rose Lee.“One who sheds its skin.”

I’d seen live burlesque shows with edgy circus-like acts, full of unconventional themes and performers at fringy venues like the Annual Burlesque Festival. I was fascinated with the kitschy seductions, the Hollywood-esque throwbacks and fearless performers who weren’t trying to fit into a conventional box. I could relate.

I once saw an act where a 200-pound woman, covered in colorful tattoos, danced down to a G-string while holding a snake. She did it with no remorse. I was impressed. I was a dancer, and being on a stage had never fazed me. Based on my conformist upbringing, I assumed taking my clothes off on a stage had negative implications.

I was beginning to see stripping as an act of bravery. And burlesque wasn’t just about taking ones’ clothes off. It’s all about the tease. An ironic tease.

When I saw the Craigslist ad, I imagined shedding my half-Jewish skin and how liberating it would be. Betsy, what would your Grandma think? said the conventional voice in my head. My much louder bawdy girl voice chimed in: Settle down, you prude. She’s dead.

The show was a four-week tour, two shows every night traveling up the West Coast to Vancouver, then a second leg traveling through the Northeast and Midwest scheduled at bars, black box theaters and a few synagogues. Plus, I’d be travelling with a bunch of Jewish girls and the show’s ringleader went by “The Goddess.”

I wanted a break from the city. I also wanted to use my boobs while they still had perk power, not taken hostage by gravity when I turned 30. The fact that I’d be dancing around to blasphemous music with Jewish star pasties duct-taped to my areolas wasn’t the issue for me.

Maybe being accepted by this marginalized show was comforting — a way to confront this contradiction festering inside of me.

At the first rehearsal, I met the other dancer, Rachel, a 21 year old with the bountiful energy of a Chihuahua. She’d had just moved to Manhattan from Florida. (I was going on nine years). I envied her carefree attitude, her A-Cups shaped like pointy meringues that didn’t require a bra. Both of her parents were from Israel.

The show opened with the “Hava Nagila A-Go-Go” and the Goddess’ first monologue about her controlling mother issues and curious sexcapades. Next came the “The Hamantashen Song,” a tribute to the holiday Purim comparing the triangle-shaped, jelly-filled Jewish cookie with the triangle-shaped female sex organ, more Goddess jokes, The Hasidic Strip, another female guest stand-up set, and the big finish.

I wasn’t concerned that what we were doing was arguably distasteful. Since when has Purim been a serious holiday?

Driving to the Red Devil Lounge, I felt paralyzed with nerves. I had performed in front of thousands of people before, but I’d never been more worried than the thought of performing with this raunchy estrogen circus. Yes, the content was X-rated and ridiculous, but it was charming – a variety show steeped in self-deprecating humor. If the audience was offended, then I was offensive. I was a walking self-deprecating variety show.

I felt like that rejected, floating-identity teenager, except now, I was empowered to embrace my gray areas. I duct taped the cardboard stars to my bare chest. And then it was time.

The opening number felt like slow motion. The first article to come off was my jacket. That awkward puberty feeling when I became aware boys were checking out my growing chest filled my entire body. I wanted to fake a stroke, flee the building, anything to get me out of this regrettable situation. How did I get here?

Pants were next. I ripped the Velcro and threw them off with vigor, baring my white thighs. Did I remember to shave? I could sense the audience’s anticipation. But I kept smiling like a freak. I can do this, I thought, even though Rachel and I kept colliding as we tried to avoid the splinters sprouting up all over the tiny stage. But we kept going.

Finally, with a coy wiggle, I ripped off the last piece of clothing, the tallit.

All that was between me and the audience were the cardboard stars and my white briefs. I surrendered all my apprehensions. I imagined my Grandma smiling back.

Betsy is a writer and editor in New York City. She has published work for the L.A. Times, DAME Magazine, Redbook, Cosmopolitan.com, and Hemispheres.