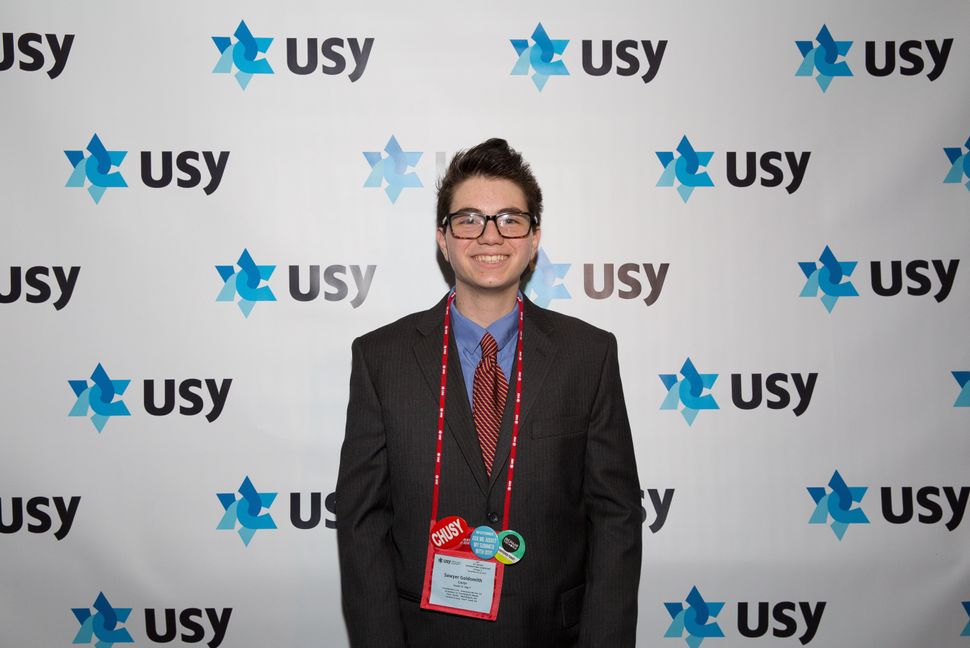 Sawyer Goldsmith is the religion/education vice president for the international board of USY. Image by Courtesy of USY

(JTA) — Sawyer Goldsmith said he has always felt accepted as a a member of the LGBTQ community in United Synagogue Youth, the Conservative movement’s youth group. But the 16-year-old from suburban Chicago hopes his recent election to serve as religion/education vice president on the group’s international board, the first time an openly transgender person has been voted to the board, will show others who may not be as comfortable that they belong.

“I want the other trans USYers to know you’re seen,” Goldsmith told JTA in a phone interview last week. “I can be this key person for them, that they don’t have to hide in the background, they can come out if they feel comfortable, they can be themselves.”

In December, the Highland Park, Illinois, native beat out another candidate for the position at USY’s annual convention in Chicago. Goldsmith, a junior at Rochelle Zell Jewish High School in Deerfield, says his victory is “one of the proudest moments” he has had.

“It felt really amazing,” he said. “When I went up to accept it, all of my friends in my region were screaming at me and shouting my name, and I just felt so amazing. I had to wait a good three minutes before I could speak because everyone was so excited and happy for me.”

Though Goldsmith found USY a welcoming environment when he came out as transgender last year and started transitioning from female to male, he said he was not as comfortable everywhere.

“USY was always a place for me to be myself, but I know in other Jewish situations that I didn’t feel like I could be myself and I was scared,” he said.

At his home synagogue, North Suburban Synagogue Beth El, his parents are working on a committee of parents of LGBTQ children to ensure that the community is welcoming.

As religion/education vice president, one of Goldsmith’s goals is to make sure transgender USY members get appropriate accommodations during retreats. Goldsmith recalled an experience in which he was told he could not share a room with other male members on the program.

“We are proud of Sawyer, just like we’re proud of all our teen leaders and we strive to create a welcoming culture for all participants, regardless of their identity,” Wernick told JTA in a statement.

The Conservative movement, like the other non-Orthodox denominations, has embraced the LGBTQ community. In 2016, the international association of Conservative rabbis passed a resolution expressing its support for and acceptance of transgender people. The Rabbinical Assembly resolution declared support for “the full welcome, acceptance, and inclusion of people of all gender identities in Jewish life and general society.” It cited Jewish legal literature, going back to the second century C.E. Mishnah, which “affirms the variety of non-binary gender expression throughout history, granting transgender people the obligations and privileges of all Jews.”

Goldsmith had a passion early on for Judaism. Growing up, he attended Shabbat services every week and Hebrew school three times a week at the North Suburban Synagogue Beth El. In middle school he became involved in USY’s preteen program, Kadima. Still, he craved more Judaism in his life, so he decided to attend a Jewish high school his sophomore year.

“I was always the kid who knew the most [about Judaism], and I always got it and understood it, but the education I was getting was not enough,” Goldsmith said of his decision to transfer to a Jewish school.

In his new role, he hopes to make other teens excited about USY and Judaism.

Among Goldsmith’s goals is encouraging theological conversations among USY members on topics such as God’s existence and Jewish prayers. Goldsmith, a music lover who in his free time enjoys playing viola, piano, guitar and ukulele, also wants to foster dialogue with teens of other religious backgrounds.

“I’m really hoping to bring bigger and broader conversations to the table,” he said.