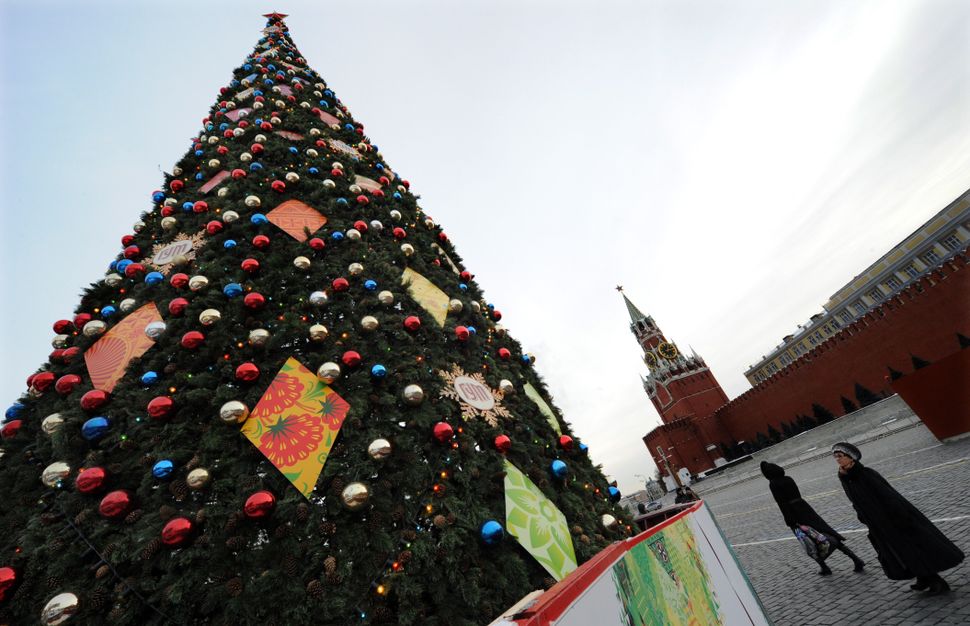 While American Jews nosh on sinful servings of moo shu, their Russian-speaking neighbors indulge in a syncretic Christmas ritual of their own, preparing for New Year’s celebrations.

Over 1.7 million Jews left the Soviet Union since the 1970s, with some 500,000 settling in the United States. My own family arrived in 1989, amid the last great wave that washed across the Soviet collapse.

While we were welcomed in the United States as refugees from anti-Semitism, we did not come in search of religious freedom. Still, the congregants at a suburban Boston synagogue saw us as victims, denied the ancestral faith by Soviet oppression. Some pressed crisp $10 bills into my 9-year-old hands. One kind family even took us under their special care, introducing us to Shabbat and holidays. I can still taste the fresh-baked raisin challah they served on Rosh Hashanah.

But their New Year was no match for ours.

A day or two after Christmas, my elder brother and I would scour the neighborhood for the best tree from among those that had been so incomprehensibly tossed out by “the Americans” the night before. We would split up to scout nearby streets, and I would run back, flushed and panting, insisting I had found the perfect tree. We’d carry it back like prize game, the needles prickling our fingers, strands of tinsel fluttering in the cold.

(Later, we discovered a parking lot reliably full of unsold trees. This made the whole operation easier, but I missed the excitement of our tree hunt in the suburban “forest.”)

After hoisting the rescued tree, we would rapturously decorate the still-fragrant fir that conjured up the magic of past New Years’ preparations in Leningrad.

Our Christmas-turned-New Year’s tree became a beacon of identity that set us apart from our American Jewish neighbors. True, its lights sparkled mostly for us; for weeks I concocted elaborate excuses so that my best friend, an Orthodox Jew, would not come over and witness the shameful spectacle. But that erstwhile icon of the Soviet cultural melting pot now reflected our prickly resistance to the American Jewish embrace.

Thankfully, I no longer view the world through an 11-year-old’s anxious binaries. There is no need to hide our New Year’s tree. The vessels of our identities are infinite. As a Russian-born writer for the Forverts mused three-quarters of a century ago about the Jewish trade in Christmas trees, “the Jews in America have assimilated the Christmas tree more than it has assimilated them.”

Russian literary scholar Elena Dushechkina has pieced together the story of how the Christmas tree first came to Russia — and how it became a New Year’s tree more than 200 years later.

In December 1699, back from Western Europe, a young Peter the Great broke with centuries of tradition by decreeing that the new year would no longer begin in September but, as “in many European Christian countries,” on January 1. Peter ordered his subjects to decorate the gates of their dwellings with “branches of pine, spruce, and juniper”; even the “meager folk” were instructed to hoist “at least a small tree or a branch.”

However, this evergreen innovation did not outlast Peter’s reign. Indeed, well into the 19th century, the only buildings that remained conspicuously marked with fir trees (year-round) were taverns, often run by Jews.

In 1817, 19-year-old princess Charlotte of Prussia, recently arrived in Russia to marry the future Nicholas I, ordered a Christmas fir to be decorated in the Kremlin. After her husband’s accession to the Russian throne, the empress continued this German tradition. By midcentury, riding a wave of Germanophilia and the popularity of such Christmas-themed German works as E.T.A. Hoffmann’s “Nutcracker,” the custom had spread throughout the Imperial capital, and by the 1880s, Christmas trees were ubiquitous in the provinces.

Although most of the empire’s Jews were confined to the Pale of Settlement, some had won special permissions to settle in large cities outside the Pale, putting them in the vanguard of cultural assimilation. The historian Benjamin Nathans has found that between 1869 and 1910, the Jewish population of St. Petersburg grew more than fivefold, while the proportion of these that listed Russian rather than Yiddish as their native language rose to 42% from 2%. While conversion to Christianity remained low, the erosion of religious strictures was becoming more apparent. Putting up a Christmas tree became one way to signal to yourself and to your neighbors that you belonged.

The Bolsheviks did not outlaw Christmas trees after taking power in 1917 — Lenin himself partook in the festivities on several occasions — but the ensuing Civil War put a premium on survival, not celebration. During the 1920s, however, improving material conditions and a relaxation of the revolutionary drive under Lenin’s conciliatory New Economic Policy helped revive the custom; on December 24, 1926, the front page of Moscow’s major evening daily even carried a photograph of the capital’s Christmas tree bazaar. But the social and economic upheavals of Stalin’s first five-year plan were matched by an accompanying cultural revolution. In 1929, the Kremlin abolished church holidays, including Christmas. The Christmas tree was excoriated as the embodiment of reactionary religiosity and bourgeois sentimentality. While some continued to celebrate in secret behind curtained windows, anyone who put up a tree ran the risk of being interpreted (correctly) as defiant.

By the mid-1930s, however, the Stalinist leadership tempered many of the transformations that had shaken Soviet society. A symbol of pre-revolutionary domesticity, the festive fir tree was redeployed to buttress this foundation of the traditional social order. On December 28, 1935, a front-page article in Pravda enjoined officials and party activists to put up a “Soviet fir” for the new year.

For Soviet Jews born in the mid-1920s and later, the New Year’s trees of their childhoods figure regularly among their warmest recollections. Finally, Judaism no longer stood in the way of Jews partaking in what was now a sanctioned secular celebration.

Indeed, many Jews were eager to celebrate, Soviet-style. Religion scholar Felix Corley has discovered that while well over half of Soviet citizens older than 16 still described themselves to census-takers in 1937 as being religious, only one in 10 Jews did so. Among young Jews, the decline in religiosity was especially dramatic. Soviet Jews born after the Bolshevik Revolution had wholeheartedly embraced its secular message.

Most Soviet Jews who lived through the German invasion — whether fighting in the Red Army, evacuating to the East, surviving in blockaded Leningrad or in hiding — emerged both more Soviet and more Jewish. But theirs was a Jewishness of blood, not Yiddish or the Torah. Relatives for whom religion was paramount had perished in the former Pale, but it was their ethnicity that had marked them for the slaughter, and marked the survivors as targets for a resurgent Russian anti-Semitism. The re-establishment of Israel in 1948 boosted both Jewish ethnic identity and official Soviet suspicion of “rootless cosmopolitans,” which for decades remained a cover for Russian anti-Semitism — and a cornerstone of Soviet Jewish identity.

But by this point, so was the New Year’s tree.

I returned to that magical little parking lot one Christmas Eve, many years after our first foray.

The only light streamed down from a lamppost outside the chain-link fence. Unsold trees crowded all around, as if holding a silent conclave. An empty folding chair stood in the middle of the deserted lot. The attendant had clearly despaired of attracting any more customers; perhaps he was now warming himself beside a tree of his own. I walked up to the chair and sat down, taking in the scene.

Suddenly, a minivan took a sharp left into the lot. I could make out the driver’s thick black beard and the children’s quizzical faces pressed against the windows. A woman emerged from the passenger side. “Are you selling Christmas trees?” she ventured uncertainly, in unmistakably accented English.

I hesitated, savoring the prospect of selling an American Christmas tree that was not my own to fellow Soviet Jews on Christmas Eve.

“I’m here for the same reason,” I replied in Russian, smiling.

She laughed, and beckoned her husband out of the car to help her pick out a tree.

Andrey Shlyakhter is Director of Education at Hermiona Education and an Associate at the Davis Center for Russian and Eurasian Studies, Harvard University.