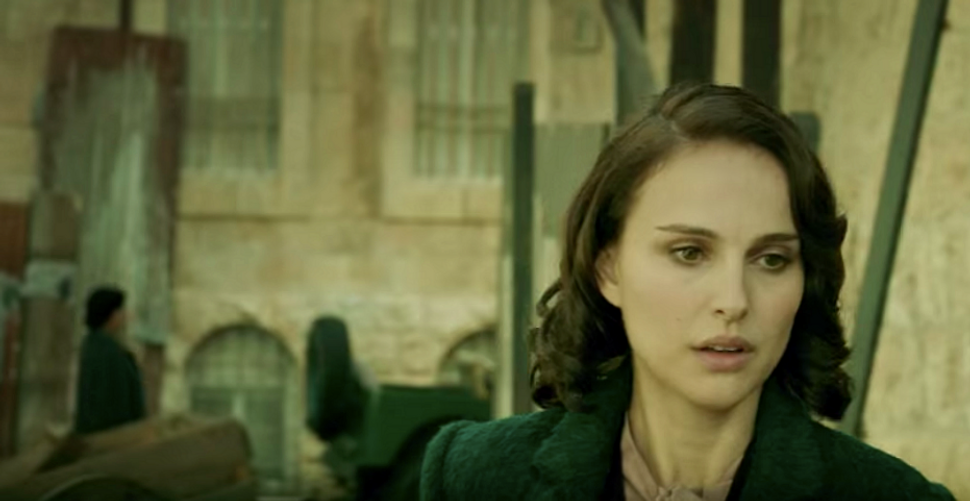 When Natalie Portman began promoting her film in 2015, ‘A Tale of Love and Darkness’, based on Amos Oz’s memoir — fans of Israeli literature rejoiced.

For months, Portman appeared on talk shows and stages nationwide, talking about the importance of Israel to her life and about the film she both directed and starred in.

The film was meant to “investigate the mythology” surrounding the creation of the state of Israel, she told the Guardian. There, she explained at length that the film’s choice of subject — the birth of Israel — was not an endorsement of a right-wing or anti-Arab Israel. (Interesting that the mere decision to portray 1948 in film prompts a preemptive apology — as if Israel’s right to independence is synonymous with “right-wing Israel”.)

Yet the film’s narrative — no matter how much she told liberal outlets otherwise — was undeniably Zionist. Here you have broken Jews, gathered in a grey Jerusalem, survivors of the unspeakable, dreaming of a place they can finally call their own. Arabs appear, yes, albeit briefly — polite, well-dressed Arabs drinking tea in a French cafe. No Arabs fighting for independence, no Arabs suffering from Zionist aggression.

Perhaps one of the most powerful scenes of the film takes place in a Jerusalem courtyard, where Jews gathered to listen to the radio broadcast of the U.N. partition plan for Palestine on November 29, 1947. The wild and desperate celebration that breaks out as the Jews are given a state, filmed in the dark tones of a Holocaust film, the echoes of the Klausners’ destroyed Rovno ever-ringing in the background, is heart-wrenching. Here, Israel is a phoenix rising from the ashes.

And so American Jews, giddy at the idea of seeing Jerusalem and the humanity of Israel brought to life on screen, rushed to the theaters. Portman’s promotion of the film, her gushing about Israel all over the media, certainly worked.

Fast forward to today, when Portman decided to forego the Genesis Prize ceremony, because of “recent events in Israel” that “have been extremely distressing to her”, a statement which she later clarified as not wanting to “appear as endorsing Benjamin Netanyahu”.

While the Jerusalem-born actress emphasized that she “treasures” her Israeli friends and family, and Israeli culture, this still came as a shock to many Israelis and American Jews, who felt this gesture was a step too far.

But perhaps what is most disappointing about her decision is that it is the very antithesis of the story she tells.

Let us return, in true Talmudic form, to the original text, of Amos Oz’s “A Tale of Love and Darkness”.

Many a reader — Israeli and American Jew alike — were enchanted by Oz’s prize-winning memoir. Here, the birth of the state of Israel is told through the eyes of a young Amos Klausner, son of traumatized European immigrants living in Jerusalem (Portman plays Oz’s mother, Fania Klausner). For Oz, Europe is a land of ghosts, while Zion is loaded with the inevitable disappointment of a fulfilled dream — and it is in writing that he finally finds a home.

The brilliance of Oz’s work is that the story is a sort of bridge between Israel’s political right and left — a narrow one, perhaps, but a bridge nonetheless.

His candor is rare. He is able to climb into the mind of his father — a revisionist “militant” Zionist — and give him a voice, too. The world, he writes, “didn’t like what we were doing here in the Land of Israel, because it begrudged us even this meagre strip of marshland, boulders, and desert. Out there in the world, all the walls were covered with graffiti: ‘Yids, go back to Palestine’, so we came back to Palestine, and now the world at large shouts at us: ‘Yids, get out of Palestine!’”

Oz allows the reader to deeply understand the place his family comes from: “I could hear them whispering in the kitchen, over tea and biscuits,” Oz recalls. “And I caught Chelmno, Nazis, Vilna, partisans, Aktionen, death camps, death trains, Uncle David and Aunt Malka and little cousin Daniel who was the same age as me…Children of your age don’t always grow up…”

His family is infuriated at those who dare “to treat us here in our own homeland as though we were still in the Diaspora; for two thousand years we have borne everything in silence, but here, in our own land, we shall not put up with a new exile, our honor shall not be trampled underfoot.”

According to Oz’s father, there “was no suffering that did not lead to redemption”.

Later on, Oz breaks free of Jerusalem and his family — “they are old and shattered and complicated and a bit repulsive, and more than a bit ridiculous” — and dreams of becoming the new Hebrew: “The generation of the wilderness had all died, and in its place there arose the generation of the Land, bold and brave, raising itself up by its own efforts from catastrophe to heroism and from darkness to great light.” He goes to the kibbutz, where “there is no one left to nag [us] in a Diaspora accent, to speechify, to enforce musty manners, to spoil life with all kinds of depressions, traumas, imperatives, and ambitions.”

Oz can speak for the isolationist, the particularist, the traumatized Diaspora Jew ready with his cudgels, just as easily as he can speak for his grown self, his own ambitions as a kibbutznik with a socialist dream and, subsequentially, an outspoken critic of the occupation.

Oz’s humanity and his ability to empathize with the other, to reach over the divide and understand the young Jews who idolized Menachem Begin — this is the mark of a great artist. Even if he disagrees, he understands those right-wing Jews who hated “the corrupt Labor Party and its defeatist, collaborationist leaders”. He recognizes their existential fears.

For a leader of Israel’s peace movement, this is incredibly brave — and humble.

Few artists are able to encapsulate the duality of a political climate so polarized as that of Israel’s history — yet Oz radically gives voice to both, as if he has both voices in his head still, too, an elf on each shoulder whispering into his ear: “Do not be naive, remember the costs of being stateless,” and another, “Let us not stoop the level of those who oppressed us.”

This is the genius of the book — its ability to unite a divided people through storytelling, across ideological red lines. Art has that immense power.

Yet Portman, when taking on this ambitious and complicated story, clearly missed that message.

Her statement to forego the Genesis Prize does the exact opposite of what ‘A Tale of Love and Darkness’ did. She chose a splashy gesture, rather than engaging. It is, after all, much more difficult to speak to those we disagree with — in this case, the distance feels more like a vague cowardice than to some brave political statement.

This week, Portman chose to contribute to the very divisions between Jews worldwide, rather than use her position as an artist to reach out across the political abyss, to follow in the ethics of Oz — to be a present critic. Not happy with a government? Don’t forsake the country. Continue to engage with it. Continue to extend a hand to the other, just as Oz in “A Tale of Love and Darkness” does so masterfully.

As the old Zionist song goes: “I have no other land, even if my land is burning.”