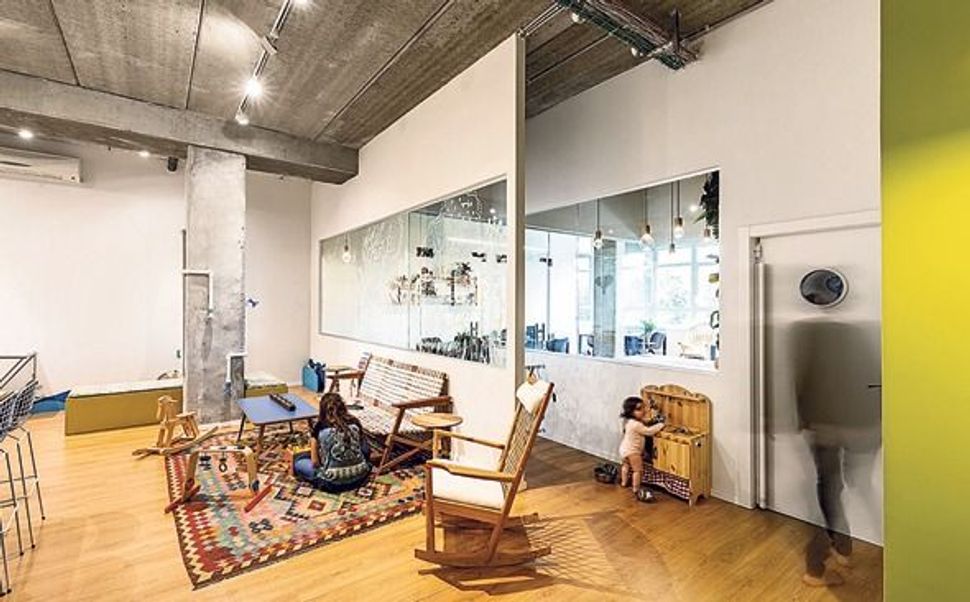 Located in the small tech bubble of Ra’anana, not far from Tel Aviv, Mommy Work is a coworking space for parents of young children which offers onsite daycare and a tightly scheduled work-play agenda. Diaper changes are at 9:45 and 12:15, according to the website.

It is the first parent-oriented co-working venture to open in Israel, a country where the startup employee is king, co-working spaces shoot up like weeds in an unkempt backyard, and the average fertility rate is near twice the OECD average of 1.7 births per woman, according to OECD data.

Opened in February, the Mommy Work office spans 200 square meters and is divided into a child-free open-space working zone, a daycare, and a salon where parents and children can hang together. Mommy Work welcomes parents of children aged 3-months to 3 years. In Israel, mandatory public education is provided to all children aged three and older. 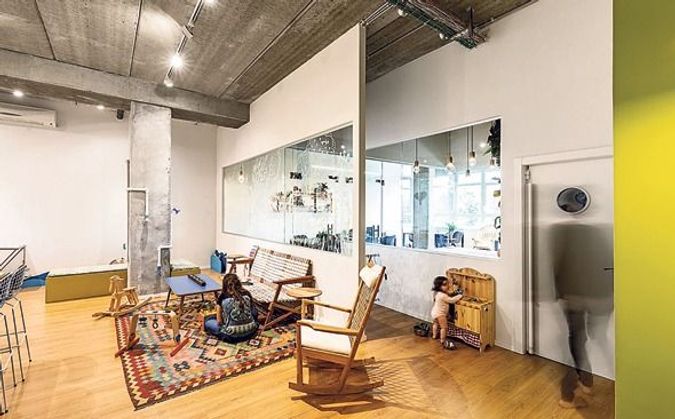 Despite what the name suggests, the Mommy Work website addresses both male and female parents. “Career or parenting? Why choose when you can have both?” the site boasts, echoing that familiar adage, that women — er, parents — can truly have it all.

“We wanted to show what career-driven mothers can be like,” Gal Haim, the producer turned entrepreneur who founded Mommy Work with her husband, Asaf Haim, told Calcalist in an interview on Wednesday.

Homegrown co-working real estate companies such as Mindspace, Mixer, Be All, and Labs are experiencing something of a boom, sprouting new locations in Israel and abroad.

The co-working real estate “guru” Adam Neumann, co-founder and CEO of market leader WeWork, hails from Israel where he spent some of his formative years in a kibbutz. WeWork currently operates 234 locations in 22 countries, 10 of which are in Israel.

In April, a coworking space for ultra-Orthodox Jews, called Ampersand, opened in Bnei Brak, a suburb of Tel Aviv.

Panthera, a women-only coworking space and “exclusive social club” is set to open in Tel Aviv this year. The first gendered coworking space is accepting applications for a $42 (NIS 150) fee and is performing a “diagnostic evaluation process” to ensure only the most qualified women are admitted.

In November, WeWork led a $32 million investment round for women-only co-working startup The Wing. Founded in 2015, The Wing operates like a high-end members-only social club with annual memberships costing approximately $3000 and thousands of applicants on its wait-list, according to multiple reports. According to the company’s website, The Wing offers lactation rooms as part of its amenities, but no childcare services.

Of the 30 current paying members of Mommy Work approximately 80% are women, Ms. Haim told Calcalist. This seems natural to her, she said, adding that having been through maternity leave and being a primary caretaker to her own son made her more inclined to remain close to him after her leave ended.

Like other co-working spaces, Mommy Work offers well-designed open workspaces, conference rooms, a stocked kitchen and other office amenities. Unlike other office spaces where startup employees work around the clock, Mommy Work is open from 8 am to 5 pm. “It is a statement: time to go home,” Ms. Haim said. “The work day does not need to go on forever.”

In a March article, Quartz’s Corinne Purtill asked why are there so few co-working spaces with childcare. In the U.S., she wrote, this is partially due to licensing requirements that make operating a daycare uneconomic. State laws, for example, require daycares to maintain a certain ratio of staff to children, which means co-working sites must know exactly how many children to expect each day. Adding the cost of space and quality child care workers, it becomes a costly amenity.

Parent-oriented co-working spaces have opened in recent years wherever co-working spaces have become bon ton, but these are typically local, single-location operations. While it was reported last year that WeWork is launching a private elementary school, WeGrow, in New York City, the market-leader does not offer daycare services at its locations.

Neither do Israeli players like Labs and Mindspace, which could spell opportunity to a business like Ms. Haim’s.

Ms. Haim is due to go on maternity leave with her second child in October, after which she and her husband aim to launch a Tel Aviv location. The pair has a desire to open locations throughout the country, but no set plan yet. “We are working from the gut,” Ms. Haim said.

Dotan Levy contributed to this article. This article originally appeared in Calcalist’s CTech on May 30, 2018.