Keep Shabbat? There’s A Gadget For That. 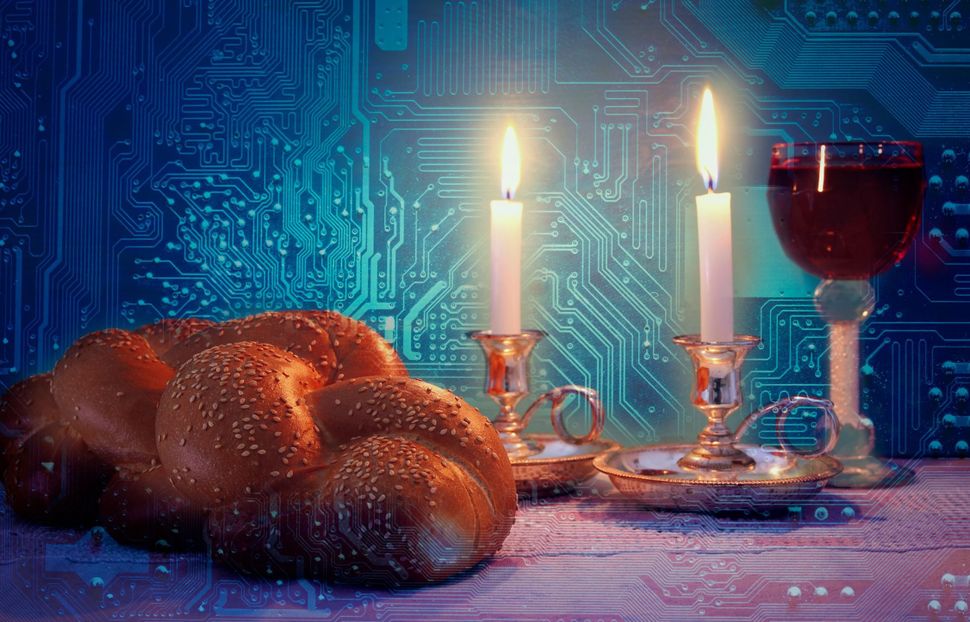 In 2018, a Shabbat-observant doctor can write a prescription using a ‘ShabEt’ pen that uses semi-permanent ink. Security personnel can rely on a hand-held metal detector, dairy farmers can milk cows, and the disabled can ride to synagogue in electric wheelchairs.

They can do it all on Shabbat, and all without transgressing Jewish law. This is largely thanks to companies like Kosher Innovations and the Zomet Institute, which sell rabbinically-approved solutions to individuals who need to get around the halakha, not transgress it.

To understand the logic behind these ingenious, and often elaborate loopholes, let us start with the basics:

The Talmud lists thirty-nine types of labor that are prohibited on Shabbat, known as the thirty-nine melakhot. ’Sorting,’ writing, and lighting a fire are all no-no’s and, over time, scholars have further defined each type of labor for clarity and practical application.

For instance, ‘sorting’ initially referred to removing any debris from grains, but has been interpreted as encompassing anything from removing the undesired elements of a trail-mix (shredded coconut, we’re looking at you), to picking the bones from a small fish — just one of the reasons for gefilte fish’s cult status. As ever, there are a ton of by-laws; ‘Sorting’s’ transgression only applies to removing the undesirable elements from a mixture. So, if you ate everything but left that nasty shredded coconut behind, rather than taking that coconut out, you’d be fine, according to the rabbis.

Loopholes are not a modern invention; the eruv was developed in Talmudic times as a solution to the melakha against transferring objects between a public and private domain, to enable carrying on Shabbat. But as technology worms its way deeper into our lives, the demand for loopholes increase — no one wants to spend their day of rest in shtetl-like conditions. Or, you know, not have a cup of coffee at kiddush.

Operating electricity is categorically banned on Shabbat. It clashes with up to five melakhot, depending on who you ask, so most modern loopholes address it. The easiest “hack” is to use a timer to control things like lighting and temperature or, in the case of the Zomet Institute, dairy farming. Technically, a timer could also be used to watch say, the Winter Olympics. A belly full of cholent seems tailor-made for sprawling in front of the TV, right? Wrong! Many loopholes fall at the final hurdle — acting contrary to the spirit of Shabbat.

Not all timers are created equal, ranging from basic plug-ins to integrated features; many ovens and fridges now boast a ‘Shabbat Mode,’ which disables any electrical activity that would violate a law.

The Shabbat elevator is another increasingly common example, scheduled via a timer so as to eliminate the need to push any buttons manually. These beasts tend to stop at every floor or so, waiting for a couple of minutes upon arrival to allow people to squish inside. The painfully slow process is best avoided unless you are physically unable to take the stairs. (I recommend walking — your thighs will thank you.)

The issue with timers is their inflexibility. In terms of lighting, this doesn’t bode well; come Friday night, bedtime tends to fall into the Instant Pass-Out from food coma variety, or the All-Nighter, capitalising on rare reading opportunities.

The ‘Kosher Lamp’ saves the day; its bulb stays on throughout Shabbat, and a handy screen twists to cover the light source for total darkness. with a range of colors and styles, from on-trend millennial pink to elaborate heimishe engraved silver columns.

If purchasing a lamp for one day of the week is too extravagant for you — consider opting for its rival, the ingeniously named ‘ShabBulb’ — some seriously great marketing in the Shabbat-tech industry — which functions similarly to the lamp, but with only an LED bulb that fits any old lamp.

ShabBulb weren’t shy to throw some serious shade at their competitors when I reached out to them, “With the advent of the ShabBulb, a practicing Jew’s ability to fully brighten or darken a room was realized without the need to sacrifice their room décor by using a light limiting Shabbos lamp… Being a standard light bulb, the light distribution is wide and not concentrated in one direction.”

Their confidence appears to be merited, however. The ShabBulb received rave reviews on popular Facebook groups ‘Jewish Women Talk About Anything’ and ‘Frum Girl Problems’, boasting close to 45,000 members between them — an impressive feat considering members are notoriously harsh critics. “ShabBulb is soooooo much brighter than the Kosher Lamp,” enthused one woman, met with much agreement.

For those who have fallen victim to timer “malfunctions,” leading to slurping soup by candlelight when the lights turn off, or schvitzing through morning prayers when the air conditioner powers down — the Kosher Switch may be a better option. It claims to make Shabbat desecration “impossible!”, in addition to saving electricity and helping users be “greener”. (If you aren’t sold yet, you will be after these testimonials: “This may save our people AND my marriage!” says Brad D from New York. “Is there a Jewish version of the Nobel prize? You deserve it!” says DB from Great Neck. What are the chances that DB isn’t the mother of Kosher Switch’s creator?)

It’s hard to see how the Kosher Switch avoids another loophole hurdle, ma’aris ayin — the prohibition against giving onlookers the impression that you are performing a prohibited act, although this doesn’t seem to be an issue these days, what with all the fake crab Orthodox Jews are noshing on. Apparently, the Kosher Switch functions differently from a regular one, and is clearly marked with the brand’s logo, so social faux pas avoided.

Leave it to the Shabbat tech innovators to figure that one out.

Rachel Myerson is a freelance journalist with a focus on arts and culture. A born and bred Brit, Rachel lived in Israel for five years before moving to New York at the beginning of 2018. She has written for Time Out, the Jerusalem Post, Times of Israel and Kveller.

Keep Shabbat? There’s A Gadget For That.