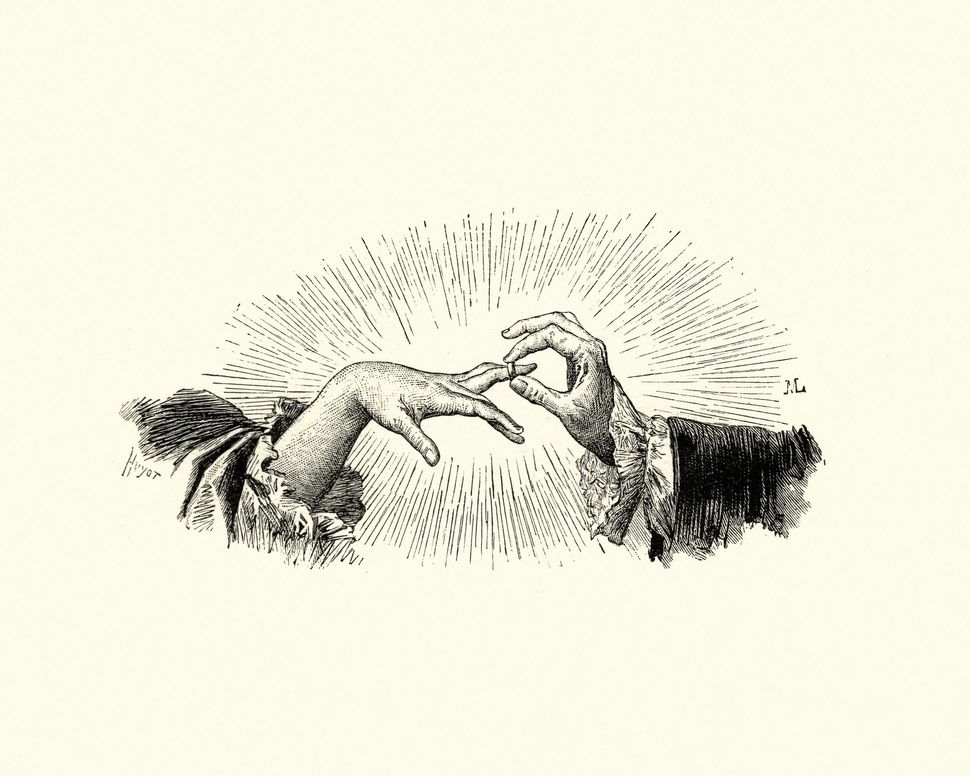 You never know when it’ll get you. I mean tradition. You walk through life managing to make difficult and unconventional but seemingly-right-for-you choices — you say no to Harvard, you quit The New Yorker, you say no to the Iowa Writers’ Workshop — and then one bright day you’re ready to propose and you find yourself scrolling through engagement rings the size of toy cruise ships. The look of them, too — decks of diamonds piled over each other like a madman’s meringue. Suddenly, you’re Babbitt, and your grandfather’s grandson: It has to be big, it has to be diamonds, and it has to be a surprise.

It was only after my eyes grew bleary that afternoon two summers ago — hours had passed, the parade of bling starting to feel pornographic — that I reluctantly admitted to myself that I couldn’t muster any feeling for a single ring I had seen, much less anticipate which would make my girlfriend Jessica happy. It wasn’t that so many other people went for diamonds. (More power to them, if that’s what felt right.) It was that I couldn’t figure out what diamonds had to do with us. It was like going to a restaurant and being told that everyone was having the fillet. But what if you liked to take apart your own damn fish? And what if you thought this restaurant gouged you on the seafood? Is there a human milestone more simultaneously individual and generic than a marriage? I felt an existential quandary descend along with the sun.

I called my best friend. She always helped me figure out what was my genuine view and what was received wisdom.

Her reply shocked me: “You have to do it,” she said, meaning a big diamond. “It’s not about you; it’s about her.”

I hung up, chastened. I looked at some more rings. And then I thought: Why, exactly, did it have to be only about her? It was 2016. Jessica and I had come together as equals, and had managed that balance through questions about money and other sensitive subjects without restricting her sense of femininity or mine of masculinity. Surely, she’d see why I wanted to look together.

And she did. She opened her laptop and quickly brought up a selection of rings. They were all diamonds. The size of toy cruise ships.

“Everyone has a diamond,” she said defensively. “And my ex-husband gave me a random family ring — plus the stone was so fragile I couldn’t even wear it.”

“What you just said is about other people,” I said. “I’d love for us to come up with a ring that has something to do with us.”

Jessica didn’t say anything, a celebratory moment curdled between us.

“Maybe we can just… live out the question,” I said. “Until we stumble on an answer that feels right.”

To Jessica’s disappointment was now added alarm and confusion. What was I talking about? And how to handle being stalled in the meantime? But after many years of not knowing the answer — of being terrified by the prospect of having to move through an experience without knowing its outcome — this time I did.

It may seem odd to attach such threat to the prospect of inconclusiveness. Many people not only manage it well, but avoid commitment at all costs. But little was more frightening to me as a teenager and adolescent. Soviet life could be reassuringly predictable, but Soviet-Jewish life was full of unforeseeable harm, the uncertainties of immigration and assimilation replacing the latter in the States. To this day — I’m 39 — my father’s first question for me is: “What are your plans?” He is never more pained and flustered than when I answer: “I don’t know.”

The Judaism that awaited us in America was supposed to work differently. Passover is about questions, not answers. So is some of the Talmud; Rabbi Akiva Eger, the great 18th-century commentator, ends many of his disquisitions by indicating the need to inquire further.

“Faith begins where knowledge ends,” as a rabbi friend reminded me recently. “As Jews, we believe in a God we can’t comprehend.” As a new arrival, I admired this tolerance for the unknown as only someone without it could. It was what drew me to Shabbat dinners and High Holiday meals in traditional homes. There, however, I often found that the practice didn’t match the spirit — my challenges of ritual elicited little enthusiasm.

I was disappointed, but I shouldn’t have been surprised. The human psyche seems to want to bend toward fixity. Over time, however, I slowly stopped being my father’s son in this. Take therapy, add a profession in which predictability isn’t even an option, stir in a series of personal and professional risks that turned out (mostly) all right, and finish with some good friends who can nurse you through the wondering, and you get someone who can manage to live without clarity or assurance — within the questions, without the answers.

All the same, those questions nearly proved terminal for me and Jessica. Eventually, her desire for a diamond drained away as, indeed, a false graft, but what did that leave? We didn’t want to abide by norms established by others — but what was our norm?

For a long time, we had no answer, though the urge to force one was enormous: We were surrounded by people we loved who couldn’t understand why we were spending time so freely so deep into our 30s, without commitment. And the unrelated challenges we experienced as a couple were amplified because they took place in the context of this not-knowing. After she moved in and we couldn’t figure out how to share the space well — was that temporary, or more evidence of how much we couldn’t resolve as a unit? Was it an extended trip abroad that revived some issues we thought we had transcended, or its taking place while so much else remained unresolved? There were good days, too, when our questioning seemed non-terminal and our faith in finding answers felt like growing muscle.

One Saturday morning almost a year after our first conversation about rings, for no apparent reason — she hadn’t done it before — Jessica went on Etsy and started browsing engagement rings.

“What do you think about this one?” she said, showing me a lovely antique navette ring with a reasonable price tag. I knew the right moment would arrive without a bang— it would just feel right, finally — so this felt apt, too. Ironically, the stones were diamonds, one round and two marquise cut.

The seller lived in New York and agreed to show us the ring in person. It was beautiful — and half the size it had seemed online. Apparently, the search wasn’t finished with us. We dragged ourselves home in deflation.

But Jessica didn’t give in. She called back the seller, and asked if she had other rings. She did — did Jessica like sapphires? She loved sapphires. And so Jessica turned around and met the seller once more. This ring was even lovelier, and in a fitting coda to our untraditional journey, Jessica paid for it herself on the spot and I wrote her a check when she got home. It wasn’t unromantic, but the most important thing was that it felt real.

This essay should have been about the burr-strewn, detour-filled path Jessica and I took to figuring out how a darkly-complexioned Soviet-Jewish boy and the Viking-like daughter of an Irish Catholic and an agnostic WASP were going to blend such disparate ethnic, cultural, and religious backgrounds, including our Mars-and-Venus parents.

But this turned out to be easy. In fact, in some ways, the combination was a boon: With Jessica, I’ve come to realize I will make a more active effort to instill Jewish knowledge in the children we have than I would have with an equally secular Jewish partner, with whom our shared heritage might have seemed like enough. So I’m finally sifting through the Telushkin books that have been gathering dust on my shelves for years. But it isn’t just me. We’ve just relocated, and coincidentally — or not — our newest friends are a rabbi and his wife, who’s an academic. It was Jessica who asked them whether we might have Shabbat dinner at their house sometime soon.

No, the hard part was waiting while we figured out where we turned out to agree with tradition and where we had to bend it closer to us. (A stone? Yes. A diamond? No.) The irony is that this turned out to be one of the most Jewish experiences I’ve ever had — at least according to the notion of Judaism that so excited me when I first encountered it three decades ago. For over a year, we had to live at the end of knowledge, as my rabbi friend referred to it. “We make the biggest life decisions on faith,” as he also said. “What is marriage if not a 50-year-leap based on a couple of years of evidence?” Life forces many of us to do so, but Jessica and I had insisted on this discomfort, and had to figure out how to believe in the meantime.

And I learned something else. When I told my friend about my Shabbat-dinner challenges all those years ago, he said: “Did you ask questions to provoke, or to get answers? Because that’s the difference between the wicked son and the wise.”

Perhaps I leapt into Judaism poorly — but it forgave me. Many years later, it helped show me how to leap into marriage.

Boris Fishman is the author of the novels “A Replacement Life” and “Don’t Let My Baby Do Rodeo,” and will publish “Savage Feast,” a family history told through recipes, next spring.