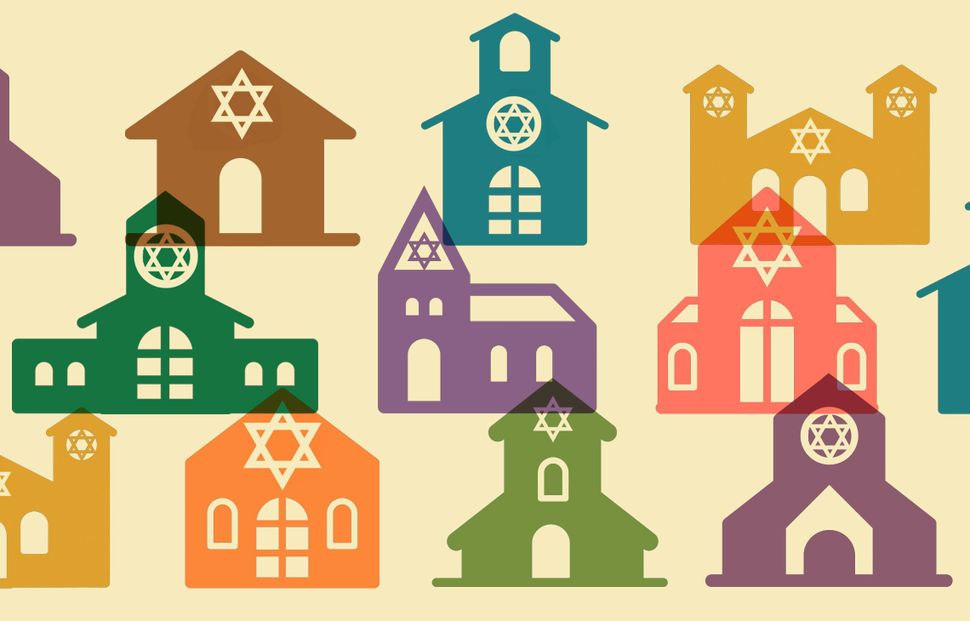 Why should a 21st-century synagogue look any different from an 18th-century one? After all, the structure of the service and many of the prayers are the same, one might argue.

But as modern life has morphed and changed, so too have potential congregants and service attendees. In a world where increased use of technology has led us to vibrant social networks and virtual life — but more isolation and loneliness in our real day-to-day existence — the idea of the synagogue as a nucleus of community has a more urgent appeal. And so, ethos must be conveyed not only through synagogue offerings, but through spatial design as well.

Integration is an emerging theme in modern synagogue architecture — including the integration of synagogues into living space, or a daily way of life. And in an effort to defray costs, some American synagogues are working with developers to build hybrid structures where the daily and holy literally share the same blueprint.

Congregation Shaare Zedek on Manhattan’s Upper West Side, for example, partnered with a developer recently in order to stay afloat; the new building will include 20 condos plus a community center for the synagogue, which will remain on the bottom three floors of the building. The new development is necessary, both to increase traffic to the synagogue as well as to stay relevant — without it, synagogue president Michael Firestone told Curbed, they’d be “left with a crumbling, abandoned building on 93rd Street.”

Shaare Zedek is the first synagogue in New York City to expand with residential space, and other congregations are interested in following suit. While working with a synagogue in midtown Manhattan, Manhattan’s Studio ST Architects pursued a speculative design creating a new, shared building for a residential condominium and synagogue, called the “SynaCondo.” 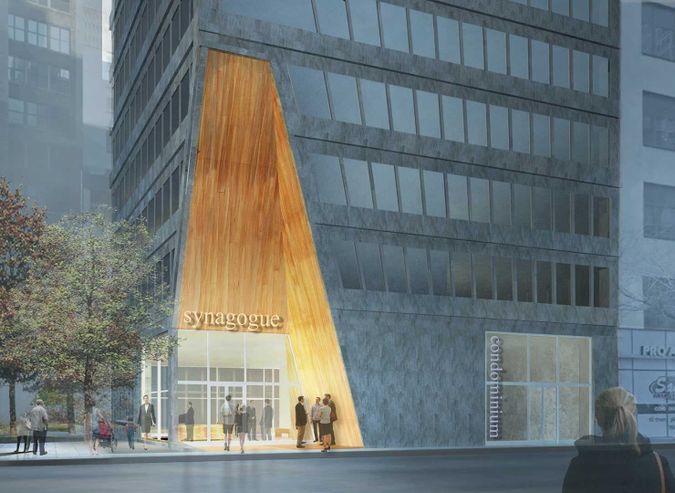 Architect Esther Sperber recounted that she had attended a conference with many members of the clergy of various faiths — all of whom were struggling with similar issues of how to translate old synagogue and church buildings into a worship model more compatible with modern needs.

“Many of these buildings are quite hierarchical — an elevated front podium, an imposing ark and very high ceilings, and people sit in rows,” Sperber said. “Many synagogues that I know are moving toward an understanding of prayer as a much more egalitarian, communal, shared experience. With some of these buildings, it is a struggle to mitigate between the architecture of the structure and the structure of community as it’s evolving. That’s where the design challenge is.”

Though Sperber’s client opted not to use this design (choosing instead to sell off part of their property), the challenges of making a synagogue more appealing to a modern lifestyle are manifold, and congregations across the United States are facing this issue, as they try to attract members.

“More synagogues will be going in the ‘SynCondo’ direction, going forward,” Sperber said. “Not only would they make more money, but it would completely re-conceptualize what synagogue space would look like. It could be 21st century in terms of systems as well as giving an opportunity to really think about models of how people would sit, and to what extent the space should be uni-functional or multifunctional.”

While some architects are examining opportunities to combine residential design with the spiritual — others are thinking about accessibility, ensuring that communal congregational life can extend into old age, even when mobility may be compromised. 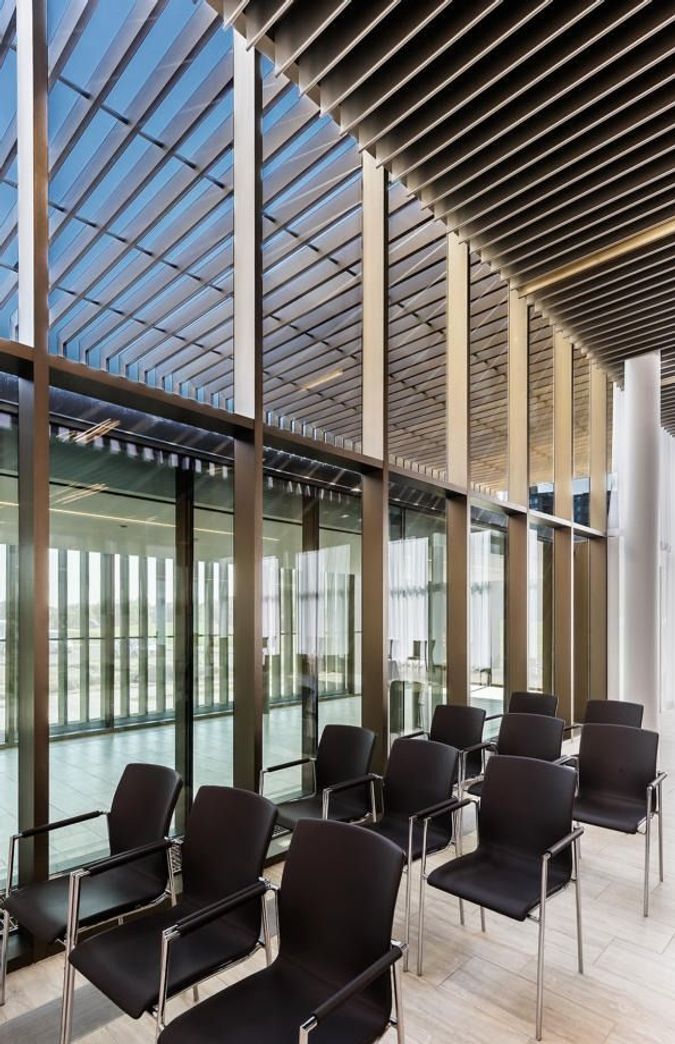 Chicago’s Park Plaza Synagogue, a Modern Orthodox senior retirement facility built in 1987, was awarded a Best of 2017 International Award for Religious Art and Architecture. The facility was recently renovated by Epstein architects to include a 3,600-square foot synagogue addition to the existing building. The new design contains a synagogue component that is separated from the building by a thirty-foot wide courtyard, and light and screening unites the separate elements. The concentric synagogue sanctuary is separated from the secular galleria, used as a social and exercise space, and are connected only at the synagogue entry. Light unites both elements, creating the sense of a series of nested boxes representing community, tradition and faith.

Other communities see new design as an opportunity for expanding its offerings beyond the strictly spiritual.

“We don’t want to build another shul,” said Melissa Balaban, Ikar’s executive director told the Forward in June. “There are plenty of those. We want to build a place for innovation.”

According to its website, the Ikar congregation in Los Angeles is essentially aspiring to build a community center: “We’ve been searching for a site within our current geographic area that has room for an inspiring, sacred space for davening, lectures, screenings and learning, a center for exploration in Jewish art, music, and culture, a coffee shop, and a space that will house Limudim and our Early Childhood Center. It took Moses 40 years to find his way to the Promised Land – we’re hoping to wrap this search up in a fraction of that time.” Ikar is currently searching for an architect to create an innovative space that would integrate elements ranging from a possible recording studio to an urban garden accessible to the neighborhood as well as participants.

And in another Los Angeles congregation, Temple Beth Am, Rabbi Adam Kligfeld said that while one should not “overstate” the impact of space and aesthetics on spiritual life, it shouldn’t be understated, either.

“Many American synagogues are experiencing the generational drag of decades of frontal, non-intimate prayer services,” Kligfeld said. “Whereas in-the-round, close-in, circular seating arrangements invite people to consider the others in the room as spiritual partners in the experience, and allows the rabbi, cantor, sha”tz [leader of service] or meditation leader to use the magic of centripetal force to turn the center of the room into a spiritual zone.”

Kligfeld said that Beth Am currently does as much praying, learning, singing and meditating as they can in a circle, and will do so in the future. “We are designing a sanctuary so that our ‘standard’ services on Shabbat and holidays are in that design. And we have forced the leadership to consider the daily and the weekly life of the spirit, not the three day High Holiday experience, to drive design and aesthetics as we invest in the evolution of our facility.

“Quietude matters,” Kligfeld said. “Giving people prompts for their rumination and meditation matters. Having people see another’s eyes matters. These are old-new trends, which once informed much of Jewish practice, and which got lost as American Judaism, and its architects, created frontal cathedrals. The pendulum is swinging back — intimacy and circularity are – in.”

“On the other hand,” Sperber said, “I also really respect the sense that there is something very touching and moving about using a space that has been used for the same purpose for 100 years. There are many tears and joyful moments that take place in such a space, so there is an appeal to having that continue into the future, rather than starting from scratch.”