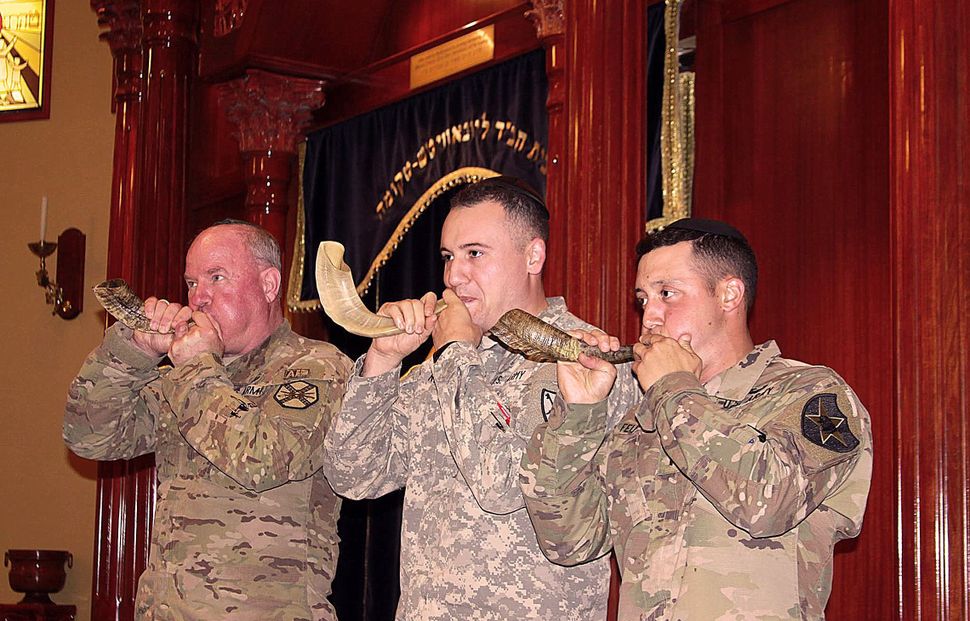 You Tube and WhatsApp.

And relying on the sun’s rays to heat up a holiday meal wrapped in tin foil.

While the U.S. Department of Defense provides 16 kosher variations of MRE’s (Meals Ready to Eat)— along with kosher wine for sacramental purposes — to active members of the military, Jewish servicemen and women often have to get resourceful in finding ways to celebrate the High Holidays in the field. 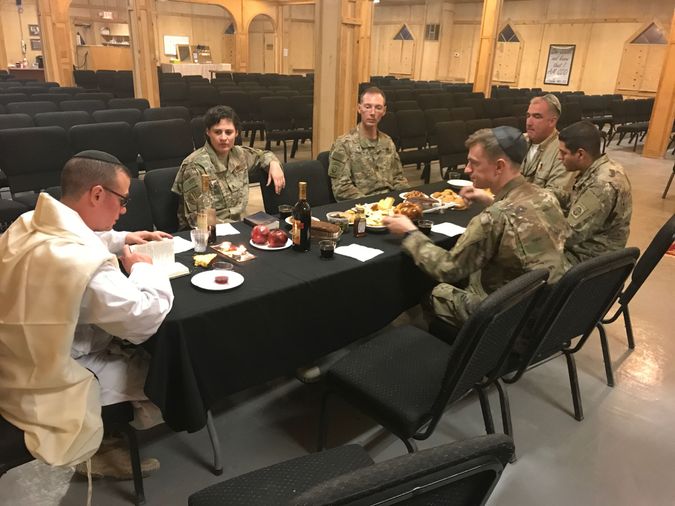 “High Holidays at home became less and less common as my career in the military progressed,” said Chaplain (COL) Jacob Z. Goldstein, RET, the longest-serving Jewish chaplain in the United States military. “Just ask my wife.” During his 38 years of service, Goldstein has been deployed six separate times.

“We could leave our MRE’s out in 130-degree weather and they would cook themselves,” he recalled. “In Iraq, we climbed massive date trees to get honey for Rosh Hashanah. In Afghanistan, we found pomegranates the size of watermelons. I once went to the Euphrates River for tashlich, and another time I went to a small pond next to our ammo dump in Bosnia. We once built a sukkah at Camp Liberty, right outside Saddam Hussein’s palace in Iraq, with palm fronds and greenery cut right from the palace grounds.” 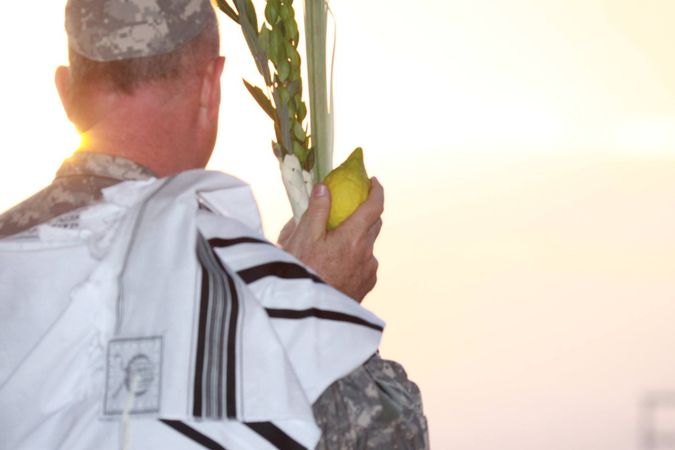 Due to the separation between church and state, the military cannot provide prayer books or religious items of any sort — so that’s where third-party non-profit organizations like The Aleph Institute enter the picture.

Founded in 1981 under the direction of the Lubavitcher Rebbe, Rabbi Menachem Mendel Schneerson, The Aleph Institute first began serving the military in 1995.

Rabbi Menachem Katz, Aleph’s director of prison and military outreach, estimates that at any given time, Aleph services 1,000 active duty military personnel around the world through its “Enduring Tradition” programs. While Aleph does send packaged items to individual members of the military upon request, the bulk of its work is partnering with Jewish chaplains like Goldstein to disseminate the thousands of camouflage prayer books they print, yarmulkes, shofars and tefillin they offer.

“I’ve got a guy in Monsey, New York, that just went out and actually cut willow branches for me to send to deployed members of the military,” Katz said. “I just shipped twenty sets of lulavim [ritual palm fronds] and etrogim [citrons] overseas for the holiday. I recently sent three cases of beef and lamb kabobs and schwarma to a soldier in Iraq.” 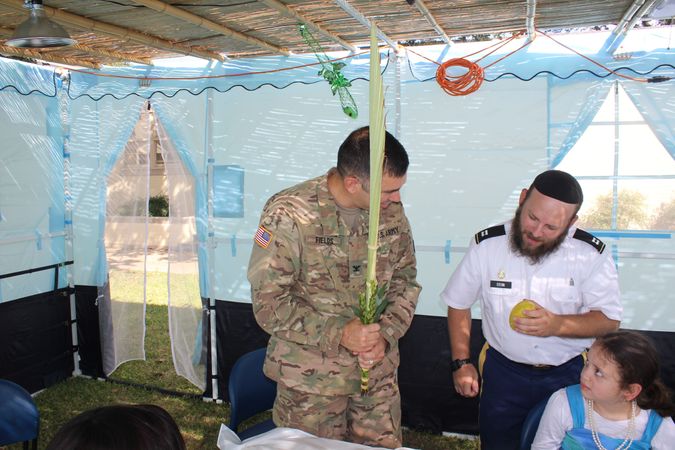 Another organization many servicemen and their loved ones have come to rely on primarily through word of mouth is Koshertroops, based in Rockland County, New York. Co-founded ten years ago by friends and neighbors Sara Fuerst and Ava Hamburger, Koshertroops first began as a mitzvah project for Fuerst’s daughter. 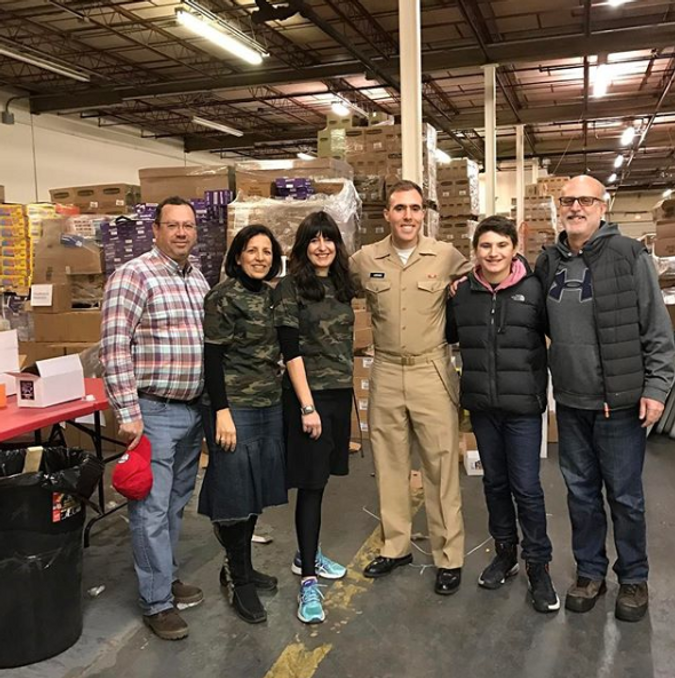 “It all started when we got one hundred names of Jewish soldiers and made Purim packages to send them,” said Fuerst. “We got the community involved and the next thing we were doing was making Pesach packages. It all just kind of happened.”

For Rosh Hashanah, Koshertroops will send classic Ashkenazi Jewish foods like challah, chicken soup with matzo balls, canned gefilte fish, honey cakes and pomegranates, along with a tablecloth, a holiday guide with candle-lighting times in places like Iraq and Afghanistan, and sometimes even leftover gift bags from past bar and bat mitzvahs. Holiday packages are also sent to spouses and children of servicemembers.

Supplies are usually sent out two weeks before a holiday, though last-minute requests happen often enough, in which case Fuerst or Hamburger run to the post office to overnight packages to those who need them. “We even get letters from the non-Jewish buddies thanking us and saying their Jewish buddy in their unit shared his care package and told them all about the holiday,” Fuerst said. “Everyone appreciates it.”

“I was the only observant Jewish sailor in my unit,” Pasquale R. Iorfino, ITC (EXW) U.S. Navy Ret., said. “I was able to hear a recording, thanks to my shipmates, of the shofar on Rosh Hashanah and fellow sailors and the medical staff kept a close watch on me as I fasted for Yom Kippur to make certain I did not overtax myself.” On Hanukkah, Iorfino played dreidel and lit menorah candles — via a computer screen. And sometimes, Iorfino said, an overt celebration could be dangerous when in the field, as when he was deployed in the United Arab Emirates. “In my heart, I celebrated,” he said.

More often than not, servicemen and women assume they’re the only Jews in their unit — and it’s often Jewish non-profit organizations that connect them with others. “It’s funny, a lot of guys say ‘I’m alone, there are no other Jewish people here’,” Fuerst said. “And we are like, ‘What are you talking about?’ We just talked to a bunch of guys on your base. There are five Seders going on in Kuwait right now where you are. It’s a bit like matchmaking. We talk to so many people from all over, there’s bound to be a cross-over.”

But, Goldstein recalled with an amused smile, there is always the time when a Jewish custom can be misunderstood by fellow service-members.

“One time on Rosh Hashanah, we were living in a jungle in the Dominican Republic, and I went outside and blew my shofar,” Goldstein said. “Suddenly another colonel came looking for me and said he thought it was a call for an attack, and everyone had gone and grabbed their weapons. So. There’s that.”