What Makes A Co-Working Space Jewish? 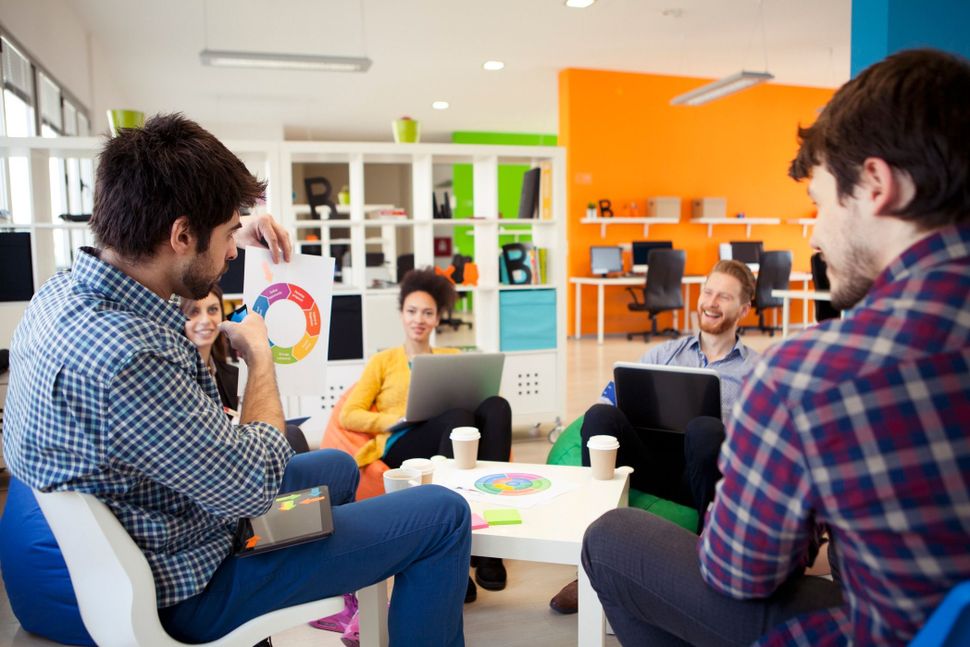 Open the door to this co-working space in Atlanta, and a long table with people working, typing and talking away confronts you. Exposed brick and lots of whiteboards make up the wall. A curving staircase leads to a rooftop overlooking the BeltLine, a popular multi-use trail that rings the city center. Look closer: You may find kosher food in the shared fridge.

The Jewish Federation of Greater Atlanta’s elementATL is one of the newest in a crop of Jewish co-working spaces.

“We all are looking to show up a little bit differently,” said Jori Mendel, vice president of innovation for the Jewish Federation. “This is one of the ways and one of the avenues to provide a different space and a different way of participating in the Jewish community.” 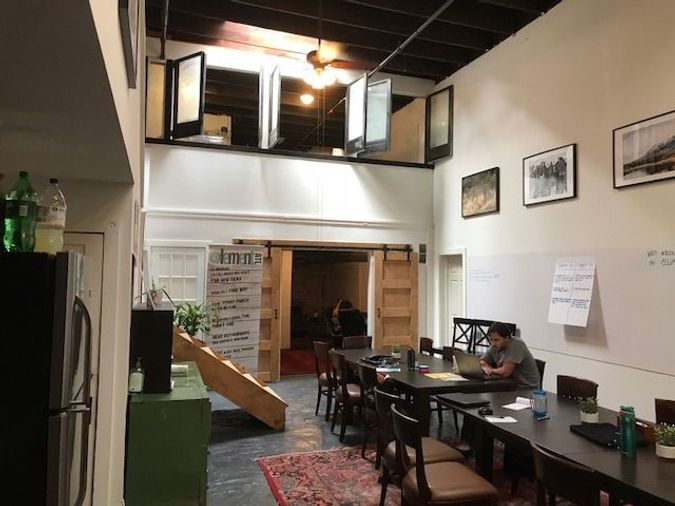 elementATL began after the Jewish Federation organized conversations with community members to explore the future of Jewish Atlanta. People wanted spaces to collaborate, so elementATL opened in June. Now, 10-20 companies and individuals each month use its Atlanta space and its second location in Dunwoody, a suburb with a large Jewish population.

Jewish Federation of Greater Atlanta has been working on something big! Introducing elementATL, a new co-working space for Jewish startups and innovation incubation right on the Atlanta Beltline in Old Fourth Ward. elementATL is a co-working, co-collaborating, co-creating space where new ideas can bloom. Think of them as a landing strip for creators and a launching pad for innovation. Their vibe is warm and funky, open and communal. Their co-working options are affordable, the space is adjacent to restaurants and bike rentals, and their “front porch” is a front row seat for people-watching on the BeltLine. All the elements you need to be connected and productive can be found at elementATL. Stay tuned for future updates about elementATL by following @jewishATL!

“We’re bringing Jewish people and Jewish thought leaders together to make change and to collaborate,” Mendel said. “To me, that’s the most powerful part of what we are doing.”

Jewish coworking spaces have popped all around the country and world. In addition to Atlanta, spaces operate in New York City, Chicago, the San Diego area and Melbourne, Australia. Chabad Intown plans to open its own co-working space, also on the Atlanta BeltLine, in December. Israel’s first ultra-Orthodox co-working space opened in April in Tel Aviv. These ventures not only chase the growing trend of co-working but also add another facet to local Jewish communities. One of the larger Jewish co-working spaces is in Encinitas, California in northern San Diego County. The Hive has 35 organizations, totaling about 100 people, with 30-40 people using the space every day. The co-working space, which is primarily for nonprofits, sits on a 67-acre piece of agricultural land with ocean views.

“When people have the opportunity to retreat into their own space, they do it,” Jenny Camhi, director of The Hive at Leichtag Commons, said. “You have to have sort of a magnetic pull to get people to come out of their offices.”

Like all of the co-working spaces interviewed, The Hive holds Jewish-focused events such as lunch and learns. Camhi said this gives members a way of connecting with the Jewish community outside of synagogue.

“They can celebrate their Judaism as they go to work every day and have conversations with the people they’re working with,” she said, adding that Jewish co-working spaces help members integrate their work and religion.

Scott Holmes, an Atlanta-based business adviser at Vistex software company, does just that. His team is spread throughout the U.S., but he holds some meetings at elementATL on the BeltLine. Holmes, the only Jew on his team, chose a Jewish space because he wanted to support the community and expose his colleagues to Jewish life and business values.

Seeing kosher food in the fridge or people wearing kippahs sparks conversation among his coworkers.

“It got people on my team talking, so it opened up conversations about what is Judaism, what is Jewish culture, even down to the charitable structure of Jewish organizations,” he said.

Jewish coworking spaces have an eye to building community. At SketchPad, a Chicago space with 20 organizations, management researches all potential members. In order to join, an organization’s work needs to strengthen the Jewish community in some way. Members must commit to acting as supportive colleagues and, when possible, participating in programs.

“Everybody is involved in building and growing SketchPad. We want to make sure that people understand that this is not just any WeWork [where] you come in, you work and you leave,” Irene Lehrer Sandalow, director and founder of SketchPad, said. “You’re part of a community.”

Sandalow found inspiration for SketchPad while working for a few months at Makom Hadash, a Jewish coworking space in New York City. When she moved to Chicago, she brought the idea with her. 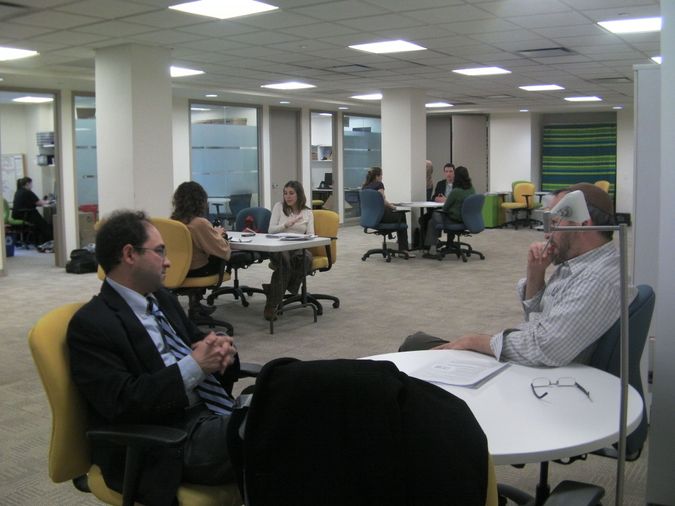 In addition to Jewish learning gatherings and skill sessions, SketchPad has Jewish artwork and a beit midrash, a study hall with lots of books to borrow. And, of course, one of SketchPad’s goals is supporting the community.

“It accelerates potential collaboration opportunities,” Sandalow said. “It also raises the bar for how organizations work.” For example, if one organization has a system on how to do staff evaluations, another organization can find out about it and share that tool.

In California, The Hive fosters a collective environment by having all members sign a “ketubah.” Usually, that is a prenuptial agreement, but The Hive has created a community ketubah with Jewish values that members should strive for: care for one another, environmentalism, creativity, innovation and collaboration. Collaboration is also a tenet of elementATL. Mendel said the space brings together people who may not otherwise gather. Right now, because elementATL is still in a learning phase, membership has remained open to any type of business. 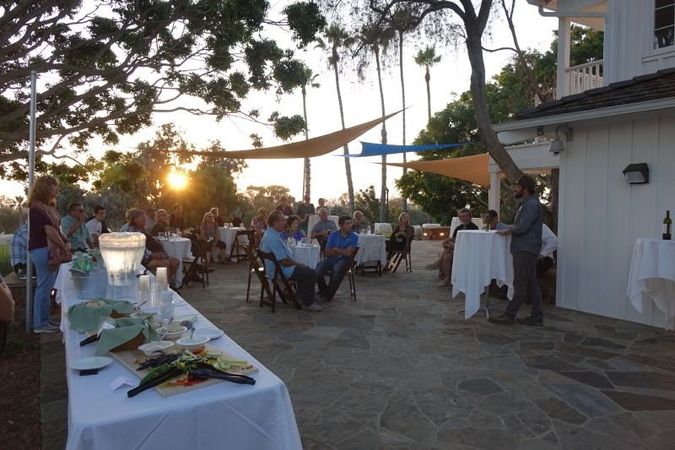 The Hive’s outdoor area. Image by The Hive at Leichtag Commons.

“To come together and be in a space to work together and just be able to share ideas, I think it is a really, really powerful way to build community,” Mendel said. “Sometimes, we’re not having the conversations that we need to be having to be moving our community forward, and this space is a really safe, welcoming way to do so.”

Honeymoon Israel, which provides trips to Israel for couples, does some of its work at elementATL. Rachel Zieleniec, vice president of marketing and communications, sits on a green lawn chair on elementATL’s BeltLine-facing porch as passersby walk and bike.

“There’s a potential and opportunity to be working in the same space as other Jewish organizations, young Jewish people or just people in general who care about Jewish values and Jewish missions,” Zieleniec said. “Especially for a remote operation like Honeymoon Israel, the fact that we can be in an environment that has that energy is huge.”

Mendel often used the word “efficient” when describing elementATL’s work. The space holds workshops to teach people how to better run their organizations, including a lunch and learn on social media marketing that attracted 60 people. This word also applies to working together. Mendel said if Jewish entrepreneurs and organizations cooperate more efficiently, they can serve more people in the community.

“If we are all out there in our silos, running in multiple directions, I think that that’s not serving the greater community,” she said. “By having these Jewish co-working gathering spaces, it’s just another way for us to be together and drive that change forward.”

The BeltLine and Dunwoody locations have served as a test for elementATL. The Jewish Federation plans on having multiple locations around metro Atlanta, with the next logical one in Alpharetta, a northern suburb.

Camhi said the recent rise in Jewish co-working spaces has its roots in the co-working trend happening all around the world, Jewish or otherwise. People want to find a community where they belong.

“A Jewish co-working space is like a natural evolution of that,” she said. “It’s finding a community to work with, plus more – plus more meaning and depth and enriching your life in a deeper way.”

Adina Solomon is a freelance journalist based in Atlanta who writes about a range of topics —everything from business to death to food to city design and beyond. Her work has appeared in The Washington Post, The Atlantic’s CityLab, U.S. News & World Report, The Bitter Southerner, and other national and local outlets.

What Makes A Co-Working Space Jewish?