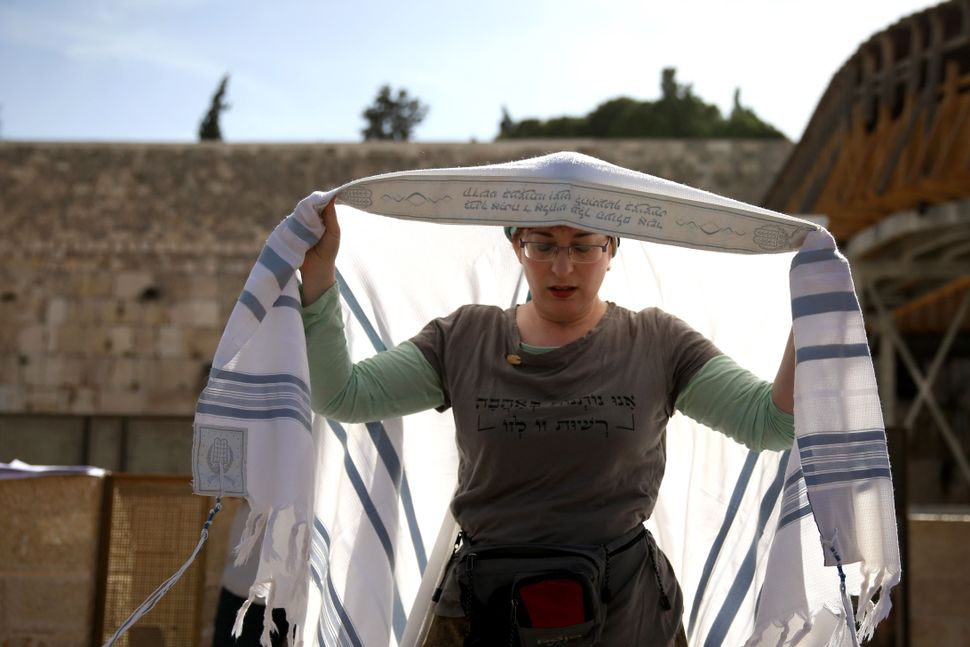 An Israeli member of the liberal Jewish religious group Women of the Wall wears a ‘Tallit’, traditional Jewish prayer shawls for men, as she prays at the Western Wall plaza outside the women’s section in Jerusalem’s Old City, on April 24, 2016, after the group was banned from conducting the first-ever’ women’s priestly blessing for the Jewish feast of Passover. Image by Getty Images

Is there such a thing as a “woman’s tallit”? Maybe not. On fashion runways this season, non-gender-conforming styles are all the rage. And to some extent, that’s also true for those blue and white tallitot, which have traditionally been thought of as “a man’s tallit,” but are now widely worn by adults of all genders and orientations on Saturday mornings without much ado.

Although it’s only been a few decades since large groups of American women began wearing tallitot in liberal Jewish congregations, for today’s B’nei Mitzvot, it’s been a lifetime. That’s long enough for tallit trends to have come and gone — from homemade tie dye of the 70’s to girly pink embroidered flowers of the 80’s, folksy Jerusalem skylines of the 90’s and most recently minimalist all-white numbers incorporating unconventional fabrics and trims. There are many factors to take into consideration: The wrong tallit can dwarf the body, slip off the shoulders and distract during prayer, feel too loud, too understated, too old, too fashion victim-y, too this, too that.

Rabbi Vanessa Ochs, a professor at the University of Virginia and author of Inventing Jewish Ritual, opined that men and women tend to differ in how they select a tallit. “The majority of guys will pick out a tallit the way you pick out a baseball cap. It’s just ritual garb. You get one, you stick it on.”

But for some women, she says, it can be more complicated. “Women tend to choose tallitot to be expressive of who they are and what will look nice with multiple outfits. The majority think a lot about what their choice communicates about them as a person and as a Jew.”

Jennifer Gallop, a partner at a Boston law firm, explained her choice of an all-white tallit from Jerusalem’s Lifeline for the Old shop along similar lines. “I am a professional working woman. I dress up every day. If I go to shul and wear the same thing I’m in everyday, it doesn’t feel right. By covering those clothes with a tallit, I’m creating a different zone for prayer.” However, in a pinch, she regards her tallit as interchangeable with any other. “If I’m traveling and I don’t have my tallit, I’ll grab one from a synagogue basket. It’s very democratic! I feel like I can wear any tallit — I don’t need it to be masculine or feminine.”

However, other women feel put off by the traditional tallitot of their fathers, husbands, and grandfathers; they instead opt for styles they believe are more “feminine.” Phyllis Shapiro, Co-President of the Sisterhood at Temple Sholom in Greenwich, Connecticut explained that her synagogue recently hired its first female cantor. Referring to the baskets holding stacks of neatly folded communal tallit at the entrance to the sanctuary, Ms. Shapiro said, “We have hundreds of traditional tallit, but our cantor thought that if women saw more feminine options, they might choose to wear one.” 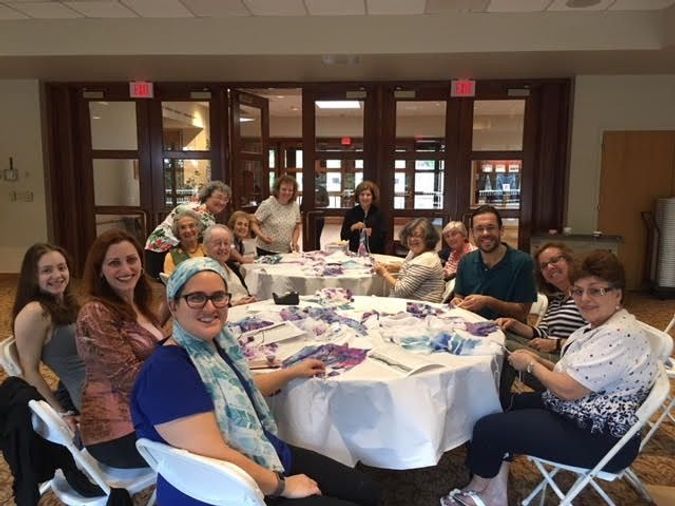 The synagogue commissioned tallit artist Sarah Resnick of Advah Designs to make 40 printed tallitot in fluid silk, adorned in shades of lilac, rose, sapphire blue, and aquamarine, with designs corresponding to visions of fields awash in springtime flowers or Biblical mountain landscapes. Members of the congregation then came together to hand-tie the shawls’ fringes in time for Rosh Hashana services, a joyful activity that Ms. Shapiro said brought them a real sense of ownership and pride. 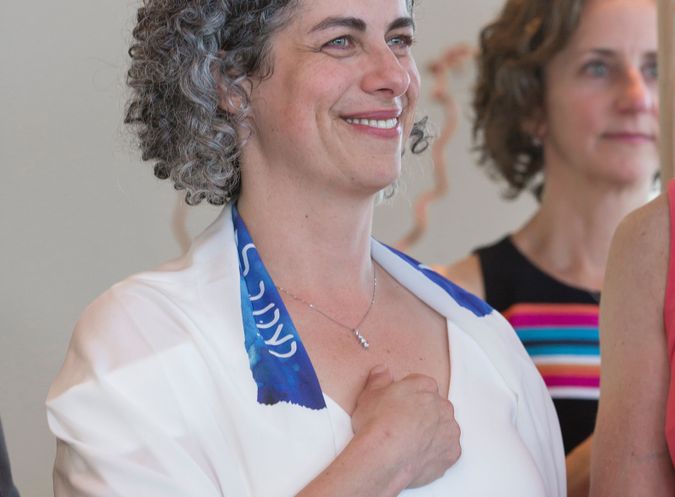 When trained weaver Sarah Resnick first began designing tallitot, a loom dwarfed her cramped kitchen and each garment would take days to craft, and subsequently priced it well beyond many clients’ budgets. Although she’s now known for the vibrantly woven tallitot in handspun fabrics, she’s also since created more accessible pre-made designs printed on silk, like the ones bought by Temple Sholom. With a business model built on empowering other women, she partners with female-run organizations, including Indigo Handloom, which weaves her cloth and is located in rural India.

Resnick said that when she’s imagining a new style, she never thinks of it as gendered. “While I personally believe that any tallit can be worn by any person of all genders, I understand that some people feel called to certain types of designs or materials, and that often that falls along gender lines — in much the same way that people feel called to different kinds of clothing based on gender,” she said. For many of her adult female clients, the choice of tallit is emotionally charged; it’s a choice that’s taken to celebrate a new feeling of belonging in the Jewish community, to communicate having reached a vista along a spiritual journey. In the last few years, Resnick has also seen a marked increase in women commissioning special custom tallitot to wear in political protests or in marriage ceremonies. 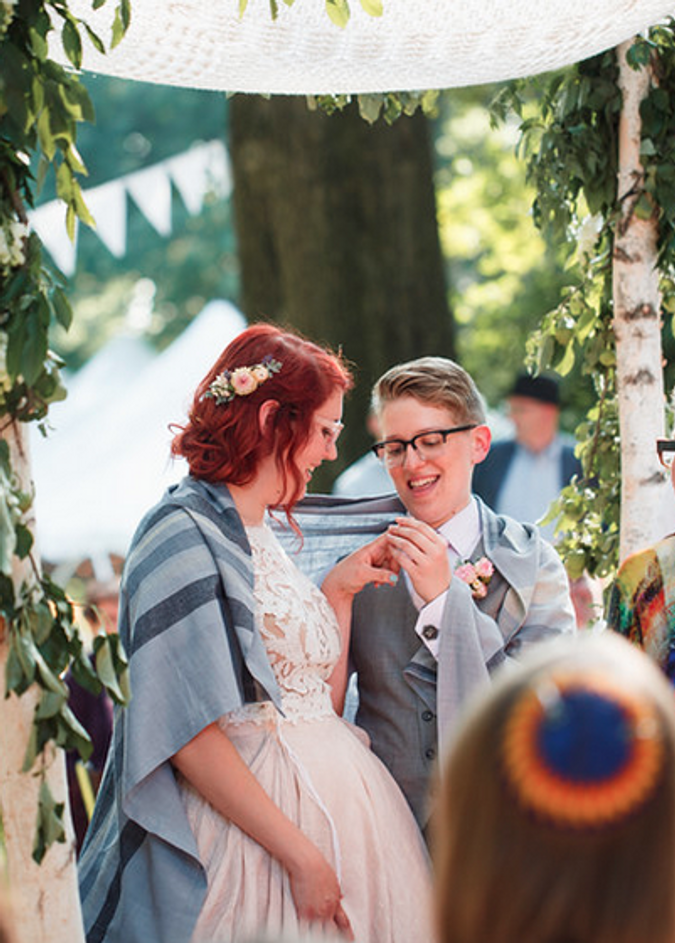 Elise Farfel Wolf, the talented artist behind Haute Tallit in Northern California, refers to her creations as “divine couture” and has built her label on values of Tikkun Olam, donating 100% of the profits to Jewish causes. Wolf recalls that, as a girl in the 60’s, “I was longingly desperate to have a tallit, but knew it wasn’t for me.” After she heard the rumblings of the Jewish feminist movement in the 70’s, she reconsidered.

Now she designs up to 10 tallitot each year. Beginning at around $700, each shawl is bespoke and personal, serving as a kind of spiritual totem to its wearer. Wolf combs fabric shops and boutiques around the world for the materials, often incorporating end of bolt materials from couture houses. One recent client, a passionate convert, had Wolf add an emerald green stripe of trim from a beloved aunt’s wedding gown. Another client wanted a black-and-white riff on traditional tallit, so Wolf incorporated white silk with a subtle floral pattern and vintage 1930’s black ribbon. Looking back on them all, Wolf surmised, that perhaps because men have been wearing tallitot for so long, they are less interested in the way that a custom prayer shawl can offer a certain ownership. “Women, more than men, want their tallit to have a story.”

Do you have an interesting tallit? Tell us your story, by emailing us [email protected] — with “Tallit” in the subject line. We may include it in a future story.