Where Are The Orthodox, After Pittsburgh? We’re Right Here, Mourning With You. 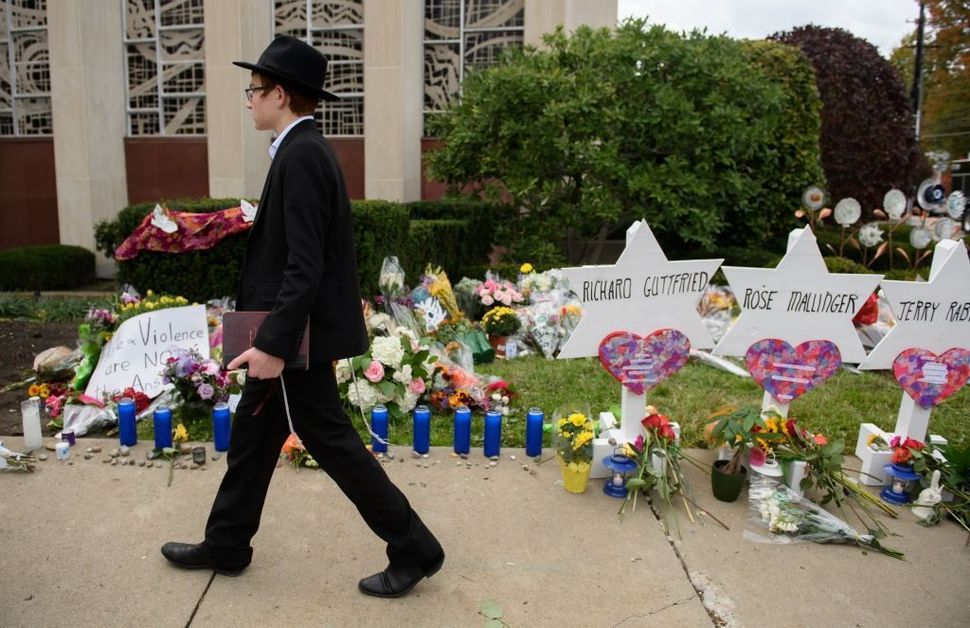 I have been asked, repeatedly, by non-Orthodox Jews about the “Orthodox response to Pittsburgh.”

What a strange question.

After all, the American Orthodox Jewish community has undoubtedly been plunged into mourning over the Pittsburgh shooting victims. Still, I sense a frustration here, among progressives seeking emotional responses from the Orthodox — and I want to address it.

Perhaps you don’t know, but we mourn differently. This is partly because the Orthodox view anti-Semitism differently — less a political phenomenon and more a divinely mandated, eternal condition.

So while our brethren over at Bend the Arc and the like are protesting, and while other Jews organize interfaith vigils, joining with other minority groups, most American Orthodox Jews tend to be much more private about mourning. Mourning is much more intimate, here; it happens on the communal level. Not online, not in press conferences, not in the public eye. It takes place in our homes and in our synagogues and in our school assembly rooms, and it is often centered around prayer books, not political posters.

And so, the reaction may be relatively subdued — for cultural and religious reasons.

But that doesn’t mean it’s not deeply pained.

It is fascinating to stand at this crossroads, watching progressive Jews march and mobilize, while the Orthodox community avoids the overtly political, turning to spirituality and conversations about self-improvement for solace. (And there are certainly political reasons for that, too — to which I will return in a future essay.)

These past few days in the wake of Pittsburgh, I have been inundated by invitations to Tehillim groups (in which community members gather to recite Psalms in unison), challah bakings (in which a blessing over the challah dough is recited in memory of the killed), and letters from rabbis of deeply religious communities calling for unity, for members to do “mitzvos b’zchus hakdoshim” — good deeds in merit of the holy ones.

And the leadership is unequivocal. While major Orthodox organizations have condemned the attack with the requisite statements — and we can nitpick about what was and wasn’t said in those statements, later — listen to what the spiritual leaders and educators, who have a closer connection to the emotional tenor of the community, are saying. Across the board, there are heavy-hearted calls for unity and overcoming denominational differences, even in the most ultra-Orthodox communities of America.

Consider this letter from a Monsey rosh yeshiva, sent out to his wider community: “The tragic besurah [news] we all received this past Motzai Shabbos [Saturday night] was one that none of us were or should be equipped to absorb, process, understand or explain….How do we direct our overwhelming feelings of sadness, love and responsibility that all of us are undoubtedly feeling at this time?”

He went on, “These special, holy Yidden from Pittsburgh have been hatefully and mercilessly killed while they were communicating with Hashem, and killed for one reason and one reason only, because They Were JEWS, Hashem’s children. This type of killing renders each and every one of them as ‘Kedoshim’ [holy ones] dying al kiddush Hashem [sanctification of God’s name], the highest level one can reach.” The clear emphasis on reminding his followers that non-Orthodox Jews are their brethren is, in fact, notable.

Or consider this editorial from Aaron Kotler, the CEO of the premiere ultra-Orthodox Lakewood, NJ yeshiva, Beth Medrash Govoha. Writing in the Aspbury Park Press, he called for civic self-reflection: “Will we let America’s beacon, now nearly 250 years old, be extinguished? For surely we realize, it’s not Jews or blacks or Hispanics or women or Irish or Italians or Catholics or Muslims or some other group who are threatened, it’s America itself. Let us not imagine that the jackboots seek only the most vulnerable, it’s our beloved and so maligned Lady Liberty, now tired and huddled herself, tremulously holding her torch aloft, standing perplexed at her sons, whom they seek.”

Or watch this address of Dr. Zippora Schorr to the modern Orthodox Beth Tfiloh school in Baltimore — in which she read a letter from a nearby Catholic school leader, who expressed her “great sorrow following the massacre over the Tree of Life Synagogue.”

“This is a moment for a serious conversation about…the way we speak to each other, the discourse we have with each other,” Schorr said to her students. “The Beit Hamikdash [Temple] was destroyed because of sinat chinam, just senseless hate. There is only one way to cure senseless hate. Sinat chinam can only be cured by ahavat chinam [unconditional love]. By love, and kindness, and chessed.”

Shaken in the office on Monday, I found myself turning to the only answer I knew, the answer I was taught from the youngest age: I put aside the screams of Twitter, and sent out a message to some of my community’s young women to form a Torah study group. In the darkest of moments, we turn to tradition. Let us study together, let us find strength in our sources, let us gather offline, unplugged, for a moment.

This is a moment of deep introspection in the Orthodox community, too. And we are bred to respond to tragedy by diving into spirituality, seeking answers in prayer, study and good deeds, and into hyper local experiences, gathering with those closest around us.

So, “where are the Orthodox?”

We may not organize interfaith vigils and marches — our grief is more particularistic, and hence quieter.

Perhaps because Orthodox Jews understand anti-Semitism differently, a friend of mine, Mijal Bitton at the Shalom Hartman Institute, pointed out recently, as we processed the news and communal reactions. While many liberal non-Orthodox Jews see anti-Semitism as intertwined with other forms of oppression, and thus one demanding an intersectional public response, most Orthodox Jews see this event as part of the continuum of Jewish history, our inescapable fate, yet another iteration of the Haggadah’s axiom “in every generation, they rise up to kill us.”

I don’t believe one is better or more accurate than the other. I believe both are necessary. Our community needs this spiritual empowerment, this deep introspection, alongside organized political action, to heal this broken country. Both progressive and traditional Jews have what to teach one another, in response to tragedy — to look inward and outward, at the same time.

Where Are The Orthodox, After Pittsburgh? We’re Right Here, Mourning With You.