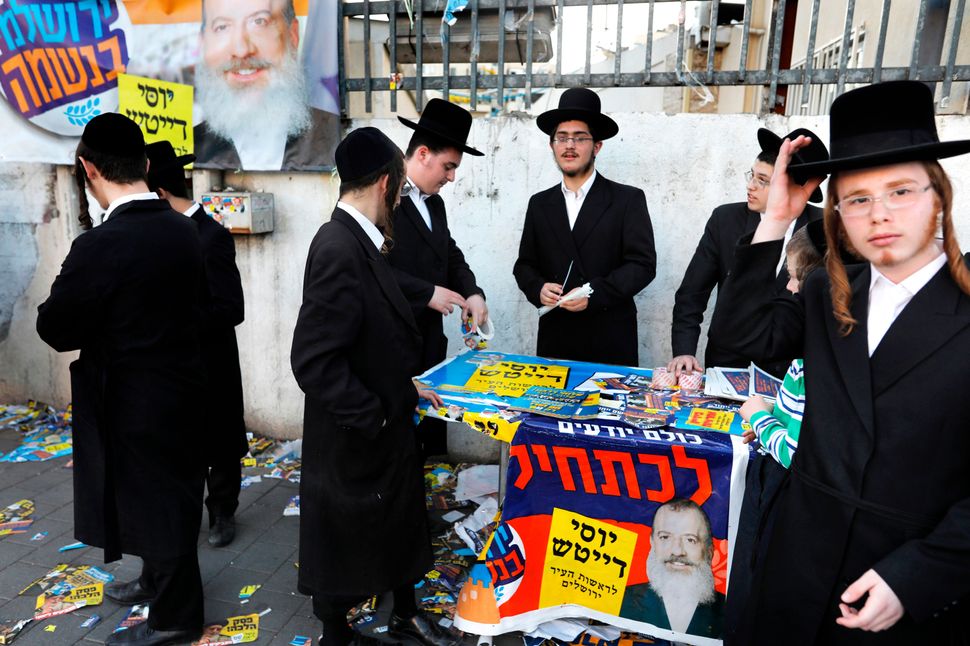 Ultra-Orthodox Jewish men stand next to campaign posters of municipal candidate Yossi Daitch outside a polling station, in Jerusalem on October 30, 2018. Image by Getty Images

“We don’t discuss politics, gossip or slander,” declared the billboard, located on a busy thoroughfare in the ultra-orthodox suburb of Ramat Beit Shemesh.

“We should distance ourselves from everything having to do with the elections as if from fire,” one cartoon boy on the billboard was portrayed saying. “My father told me that he also doesn’t want to be involved in this,” his compatriot replied. “Only to go to the voting booth to vote for who his rabbis told him to.”

The billboard, with its brightly colored comic framing political discussion in terms evocative of the Biblical prohibitions against talebearing and libel, was, in a very real way, an anti-civics lesson with one simple message: Obey without question. And leave the important decisions to the rabbis. 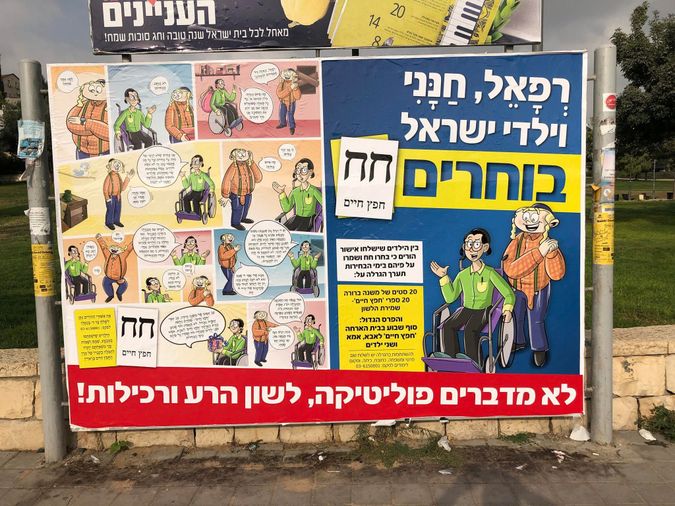 As Haredim came out to vote in their thousands in Beit Shemesh’s mayoral election last Tuesday — a tight race pitting the incumbent Haredi mayor against Aliza Bloch, a female opponent backed by the city’s secular and national-religious communities — handbills and posters promoting this attitude proliferated. Many echoed the billboard cartoon’s main theme of obedience to authority, a regular leitmotif in Haredi politics with slogans such as “Beit Shemesh listens to the Torah greats.” Other posters exhorted voters to pat attention to “Daas Torah,” a reference to a Haredi doctrine somewhat akin to papal infallibility, in which a great rabbi’s Talmudic knowledge somehow grants him both special spiritual insight into all other matters, holy and profane, and the authority to issue binding pronouncements.

This recurrent leitmotif in ultra-Orthodox electoral messaging is “in line with Israeli Haredi school curricula” and its “contempt for civil society,” said Marcus Sheff, CEO of IMPACT-se, an organization that studies the content of textbooks across the Middle East. “Cartoons like this [are] still popular with Haredi kids.”

“The big picture is that there is a definite clear and concerted effort to keep Haredi children behind the walls they built up and away from everything they consider bad, all the temptations of the modern world,” Sheff explained. “That is to say, civics and democracy are taught in a very restricted manner” and many of the ultra-Orthodox “are not given an expansive view of how civil society and democracy works and [about] individual choice in choosing representatives. Take away the civics and democracy education, and give ‘rabbis-know-best education’ and presto, you have a situation where large amounts of people will be very open to being told how to vote at election time.” 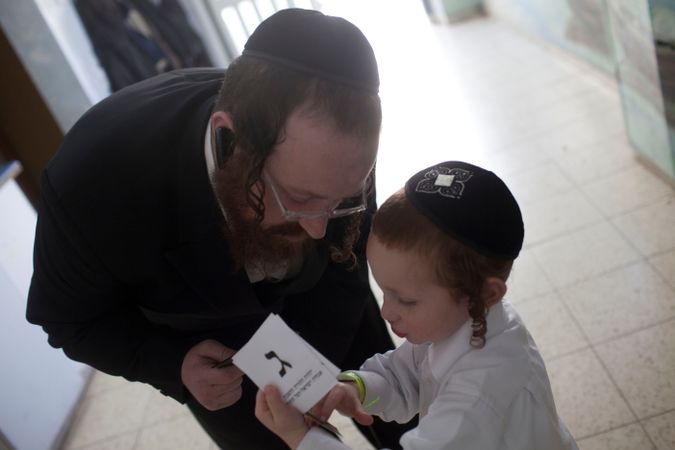 An Ultra Orthodox Jewish man stands with his son outside a polling station on election day on March 17, 2015 in Kiryat Ye’arim, Israel. Image by Getty Images

Different rabbis approach politics in divergent manners, he explained, noting how there has always been opposition to involving young people in political activism but that among Israel’s more mainstream ultra-Orthodox, politics “is one of the only subjects that is kosher.” This means that open discussion is allowed and political debate is common, even if come election day members of the community are “expected to vote according to rabbis.”

While the mainstream Haredi Jew feels free to discuss politics, the idea of limiting young people’s participation does appeal to some. One member of the local Haredi community, a smartphone-using, college graduate, told The Forward that given the violence that sometimes erupts between representatives of the various Haredi factions, the minimization of politics may be beneficial.

Beit Shemesh has a history of low-key political violence and incitement. In 2013, during an especially contentious mayoral race, the office of the moderate Haredi Tov Party was vandalized and one of its voters was assaulted. Political flyers distributed at the time decried the Haredi community’s “wicked” political opponents who sought to “uproot the Torah,” rhetoric which may have contributed to an atmosphere of anger that led to numerous incidents of verbal abuse.

Ironically, the proliferation of Haredi parties with rabbinic backing, both large and small, has led to what Malach sees as the “fragmentation of Daas Torah,” giving Haredim more choices than they previously had even if some still feel constrained by theological and halachic limits. On more than one occasion, members of the ultra-Orthodox community have complained to journalists that they dislike the rabbis’ chosen candidates but that they feel obligated to vote for them nonetheless. It is unclear how large a proportion of the community feels this way.

Nevertheless, said Malach, “you have more choice now [and] that gives more power to the individual.”

In the United States, where there are no organized ultra-Orthodox political parties, things are slightly different. Political candidates in the New York area, which has the largest concentration of Jews outside of Israel, tend to work hard to build good relations with senior rabbis because their communities generally vote as a bloc, making them politically valuable. This trend is one that some former members of the community, like Naftuli Moster, find objectionable.

“The blatant pattern of pandering to ultra-Orthodox leaders, many of whose views are antithetical to the majority of New Yorkers, undermines voter confidence in their elected officials,” said Moster, who runs YAFFED, an NGO promoting secular education among Haredim. “The candidate comes down to the Rebbe, makes promises (in one case that he would lay off of yeshivas that are not meeting standards), they vote for the candidate, make large contributions, the candidate is beholden to them both because of gratitude and because they want to get re-elected, so the cycle continues.”

“I don’t know if it’s purely because of Daas Torah. It’s that, but also just because when the official comes down for a visit with their leader, they feel an affinity toward him. And when he promises to give them loads of cash, that seals the deal. Or to lay off the Yeshivas. Or any other such promise. What I’m saying is, if you ask why the individual votes for the candidate that was endorsed (explicitly or implicitly) by the Rebbe, my answer is both because they listen to Daas Torah, but also because they feel an affinity or kinship. In a way, the Rebbe does their bidding for them on those fronts. You can literally see a pattern of this.”

At the end of the day, however, even if political discourse is allowed, the expectation that Haredim toe the line politically is part of a larger system of social control, explained Samuel Heilman, a professor of sociology at Queens College. “The basic orientation is that individuals are not the ones to make political decisions, because if they are, then the power brokers lose their capacity to in effect deliver a bloc vote and their greatest power and strength is their ability to deliver that,” he told The Forward. “I think the idea of every person thinking for himself, whether politics or anything else, is very threatening to the Haredi community. It’s not about politics so much as independent thinking and decision-making, and that’s the real risk.”

However, in some cases that control may be cracking. According to Haredi news site Kikar HaShabbat, at least three thousand Haredim voted for national-religious candidate Aliza Bloch in the Beit Shemesh mayoral elections on Tuesday, allowing her to beat out her rabbinically-endorsed opponent in a race many saw as an upheaval of a long-held, ultra-Orthodox monopoly.

Writing on his blog, local Rabbi Natan Slifkin called this development “staggering” and claimed that it marked the “beginning of the end of ‘Daas Torah’” and “a return to traditional Jewish concepts of Torah and rabbinic authority.” While this is likely an overstatement (many voters here were concerned about more parochial issues and less about overarching social policies), it does indicate that while the overwhelming majority still follow their rabbinic leaders, change is far from impossible.