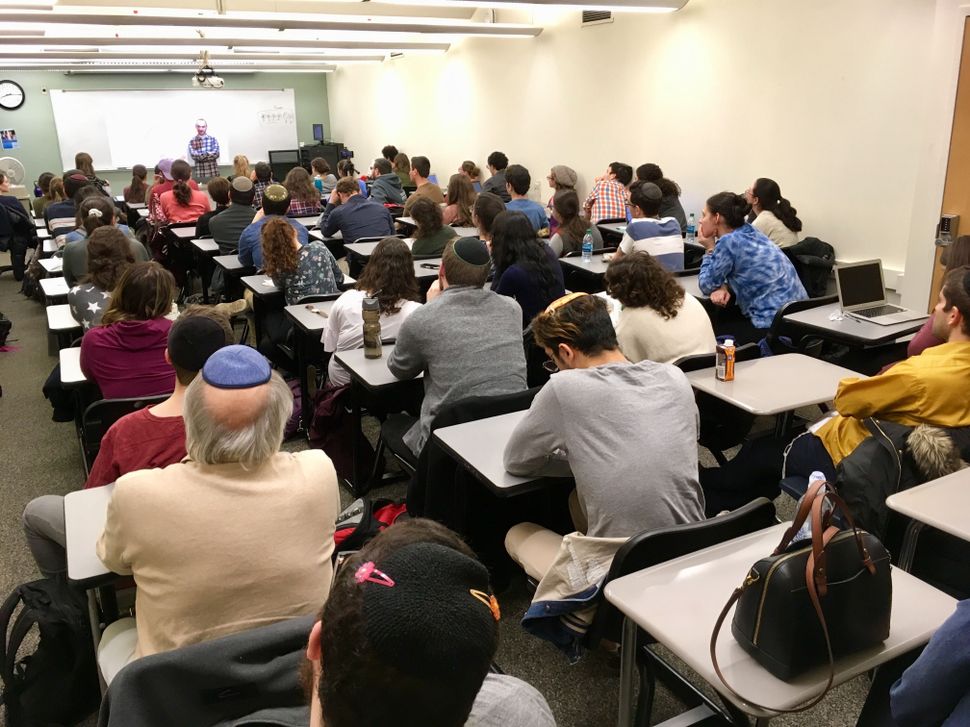 A November 14, 2018 event with Ben Katz at Yeshiva University Image by Simone Somekh

In a rare, student-led effort to address LGBTQ issues, dozens of Yeshiva University students crowded a classroom in the university’s Midtown campus on Tuesday evening for an event on topics such as coming out as gay on campus, creating social change and becoming allies to queer peers.

Guest speaker Ben Katz, a Yeshiva University graduate and Ph.D. candidate in clinical psychology at Jerusalem’s Hebrew University, discussed his work at Shoval, an Israeli organization that promotes dialogue and education on sexual orientation and gender identity in religious schools and communities.

The fact that the event was taking place at all, and the high turnout, was deemed by many of the attendees as impressive. The Modern Orthodox university, just like much of the Orthodox world, historically has had a reputation for its unease with LGBTQ issues.

Just last month, a student newspaper reported that the school’s Office of Admissions rejected a Model United Nations paper on state-sponsored persecution of sexual minorities. The article stated that the decision was to “prevent any conversation or comments related to the LGBTQ community that may be triggering” for students.

Tuesday night, however, that conversation was had.

The event organizers, the two presidents of the school’s small College Democrats’ club, said it was not easy to get the event approved by the administration.

“I’m not going to lie and say it was a breeze,” said Matthew Haller, co-president of the club and a senior at the university. “Because of the sensitivity of the issue and of the community, these things need to be worked through hand in hand with the administration. It took a bit of prodding.”

Haller and his colleague Rachel Shulman, both 21, agreed that sexual diversity is “an issue that’s not been tackled substantially” on the Yeshiva University campus.

Ben Katz has been involved as a trained facilitator with Shoval (an acronym of the Hebrew blessing Shehakol Bara Lichvodo, “That who has created all things for His glory”) for about four years. The 30-year-old, originally from Teaneck, N.J., told the Forward that returning to Yeshiva University felt like “coming home,” and that for many people who attended the talk “it felt like a breath of fresh air” to have an open conversation about these topics.

“I believe in the dream of YU,” he said. “This is where some of the most interesting conversations on Modern Orthodoxy take place.”

During the event, Katz discussed the struggle for LGBTQ exposure and rights in Israel and the role of Shoval in pushing the conversation forward in the more religious and conservative clusters of the Israeli society.

“What we provide is the ability to bring up an important conversation that needs to be had, and give a face to such conversation, which a lot of times is very abstract and divisive,” he said.

Students in attendance, several of whom came from the men’s campus in Washington Heights, Uptown Manhattan, didn’t shy away from asking questions and taking part in the conversation.

“The queer and allied students on campus have been working for years to make something of this magnitude happen,” said 22-year-old senior Rivka Reiter after the event. “I am just bowled over by the amount of people that showed up tonight.”

Another student, Shayna Weiss, said she came to the talk because she thought it was important to. “In my lifetime, I’ve seen a shift on how Orthodox [Jews] view gay Jews. It’s not just about halakha, it’s about people and their lives.”

Almost eight years have passed since Yeshiva University hosted a historic panel entitled “Being Gay in the Modern Orthodox World,” which hundreds of people attended. Since then, the debate on homosexuality and Modern Orthodox Judaism has continued mainly informally and in the pages of the school’s newspapers, which over the years have published multiple accounts on the hardship of being gay at a conservative-leaning, largely heteronormative religious university, some more negative, others a little more optimistic.

Only in 2016, Chaim Rapoport, a British rabbi who’s written about the topic, spoke about Orthodox views on homosexuality on a Friday night on the university’s Uptown campus, but no LGBTQ voices were formally invited to take part in the panel at that event.

In a brief statement to the Forward, the dean of students at Yeshiva University, Chaim Nissel, wrote: “Yeshiva University is working with its partners in the community to best support the LGBTQ students, in a manner that is true to our Torah tradition.”

This event was a first step in the right direction, the organizers said. And yet, they added, it was also “a first step.” Haller and Shulman said some students are still hoping to start a Gay-Straight alliance club on campus, which is yet to be approved by the school’s administration.

“It has been pitched,” Haller said. “It’s part of a broader discussion and collaboration with the administration—trying to figure out what works for Y.U., for the community and the students. I’d personally love to see it on campus.” “Ben Katz,” he continued, “was one piece of a larger puzzle that YU is trying to grapple with.”

Simone Somekh is a New York-based author and journalist. He’s lived and worked in Italy, Israel, and the United States. Follow him on Twitter @simonesomekh