Why You Shouldn’t Talk Politics With Family Members This Thanksgiving 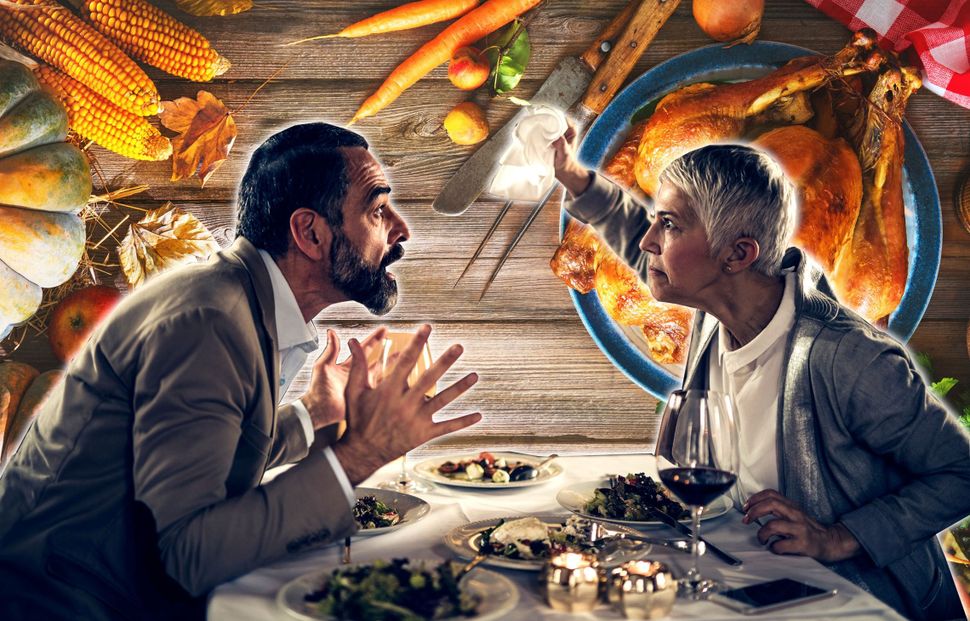 Thanksgiving is not the time to argue politics. Image by iStock/Forward Montage

We’ve forgotten a great deal of age-old wisdoms over the years, but here’s a reminder about a rule most of us grew up with: Religion and politics have no place at the dinner table.

In my family, either topic might have been a welcome distraction from fighting about everything else in our lives; politics and religion were two of the less heated issues in a whole bevy of off-limit conversation topics. Nobody ever followed the rules, of course, and it was standard for voices to get heated at my Irish-Catholic Thanksgiving meal. Holidays filled with arguments are, I can assure you, a sure-fire way to spoil memories, relationships and associations with holidays for the rest of your life.

Approaching the Thanksgiving holiday, countless pieces across the partisan Internet will emerge about how to “win” an argument with your relative of the opposite political persuasion. On the New York Times website, there is even an argument simulator meant to help users hone their debate skills with an angry uncle before the big night.

Say you use the Times advice, and you create flashcards of all the awful things Hillary Clinton or President Trump have done this year, ready to spar. You spend the entire pre-dinner part of the evening and most of the first course simply walloping Uncle Irving into submission. In the online world of likes and heart icons, you would have racked up your online gratification and moved on.

But tragically, we have conflated real life with virtual life. The table isn’t the Internet — and you’ve got another few hours trying to make small talk with a guy you just made it your mission to destroy. You and Uncle Irv aren’t the only ones grinning and bearing it through the meal at this point either; it’s likely pretty awkward for the rest of the family as well.

In a recent Atlantic piece describing a “sex recession” among millennials, technology is clearly a culprit, stunting the way we communicate with one other. As we mostly communicate online, we’ve shifted the manner in which we communicate in person as a result. We’ve come to believe that confrontation is inevitable when people with opposing view points come together. When that eventual argument does occur, winning is the objective. That may be fine online, when you don’t have to spend an entire evening and every subsequent family get-together with a person. But in person with Uncle Irv? The objective should be considerably different. The goal isn’t a one-off victory lap; it’s maintaining a longterm relationship with someone you may not love, but someone you do have to deal with on a regular basis for the rest of your lives.

So how does one handle an annoying comment or even a direct confrontation with angry Uncle Irv? Consider how the same situation would be handled if it happened in the workplace or at a playgroup of local parents. These folks, just like family, are individuals you have to grin and bear a relationship with, no matter how undesirable that prospect is in the moment.

And so, you grin and bear it, and change the subject. If Uncle Irving really is as ornery as you think, he’s used to getting the brushoff, and you’re used to finding an exit strategy, whether it’s helping prepare dinner, set the table, go to the bathroom or tend to a screaming child somewhere — it doesn’t even have to be yours, nor does it even need to be screaming. Just say you think you hear a kid, or a timer, or a knock at the door, and walk away.

Does walking away or changing the subject mean you may not convince Uncle Irving to change his vote or stop posting political memes so often on Facebook? No matter how many simulations you run on the Times opinion website, you were never going to convince him of either. The goal is to get through the meal with the relationship intact, and to make it as comfortable and enjoyable for yourself and everyone else as possible. And to do that, the goalposts need to be moved; it’s not about winning, it’s not even about conversing tersely about politics. Turn on the TV, watch the parade, and make fun of some balloons.

Why You Shouldn’t Talk Politics With Family Members This Thanksgiving