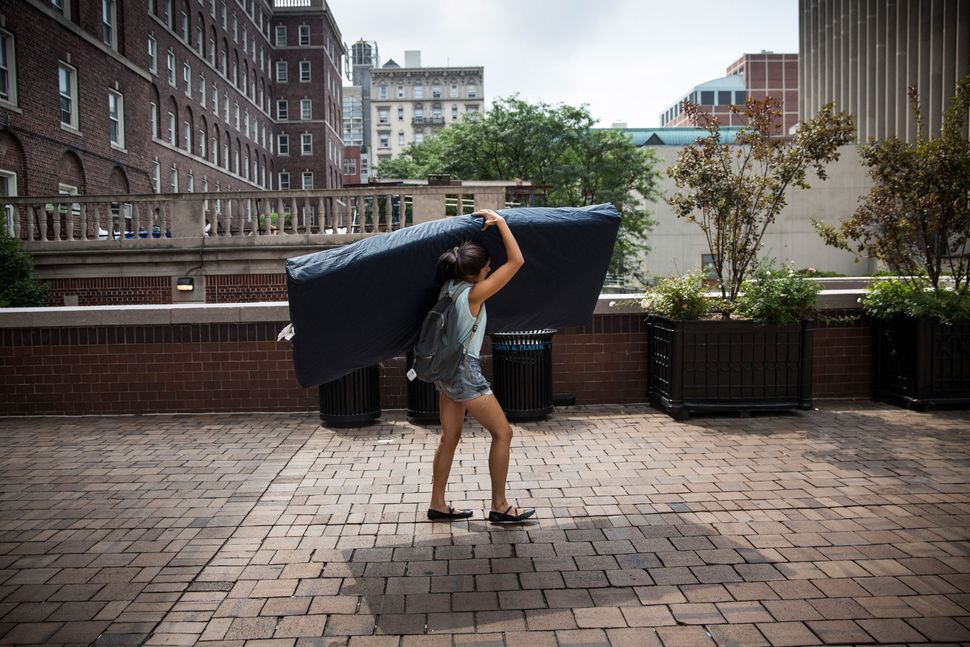 NEW YORK, NY - SEPTEMBER 05: Emma Sulkowicz, a senior visual arts student at Columbia University, carries a mattress in protest of the university’s lack of action after she reported being raped during her sophomore year on September 5, 2014 in New York City. Sulkowicz has said she is committed to carrying the mattress everywhere she goes until the university expels the rapist or he leaves. The protest is also doubling as her senior thesis project. Image by Andrew Burton/Getty Images

Recently, we read in the book of Genesis about Dinah, who was kidnapped and raped by the prince of Shechem. With no voice and no way out, Dinah was the victim of a man who had a lot of political power and social capital. Afterward, the prince goes to Dinah’s home to ask her parents for her hand in marriage – an action that many say shows the prince failed to understand the depth of the horrors he inflicted on Dinah and lacked the comprehension that forcing her to have sex was rape.

One of the most striking aspects of Dinah’s journey in the Torah is that she never speaks a word. Her rapist, her father, and her brothers are in conversation about what to do about the rape and about Dinah, but never once do we hear her voice. Sadly, Dinah’s story resonates in modern-day America.

Dinah’s lack of voice in the Torah is similar to the silencing of women who wish to come forward today. From fear of retaliation to character assassination for past behavior to the pressure given to sign a non-disclosure agreement, there are plenty of reasons more people don’t share their stories. The pressure to be a ‘perfect victim’ and a system that puts the proof of burden on the victim contributes to the collective silencing of women. There are so many Dinahs among us.

One in five women graduate college as survivors of sexual assault, a statistic that has not changed in 20 years.

The lack of justice for Dinah is unfortunately still the prominent narrative for survivors today. According to RAINN, perpetrators of sexual violence are less likely to go to jail or prison than other criminals. Just five out of every 1000 reports of sexual assault lead to jail time, which is one of the many reasons why only twenty percent of sexual assault survivors report their assault to law enforcement. In the twelve years I’ve been working and supporting college students, I have seen on the whole, far more stringent punishment and long-lasting consequences for academic dishonesty than I have seen for sexual assault.

There has been progress in recent years as well. Two summers ago, a poignant letter written by a survivor, moved the nation and put the epidemic of sexual assault on college campuses at the forefront of our national consciousness. For the first time, there was near universal outrage as young men received lenient sentences after being convicted of rape and sexual assault. The new narrative abandoned the far-too-common trope focusing on the lost potential of the attacker’s future, and instead turned to the harm inflicted on, and the lack of justice for, survivors.

This debate about who to prioritize has continued since. Recently, the Department of Education proposed significant changes to Title IX that focus on the rights of the accused. The very definition of harassment and assault would narrow, changing from “unwelcome conduct of a sexual nature” to “unwelcome conduct on the basis of sex that is so severe, pervasive and objectively offensive that it denies a person access to the school’s education program or activity.”

Additionally, universities will only be responsible to investigate assaults that takes place on campus or within an educational program. This leaves in question whether those assaulted at fraternities, where women are 300% more likely to be assaulted most of which are considered off campus, are able to access Title IX. Additionally, 87% of college students live off campus, which potentially means if an assault happens by a fellow student in their home, the university would not be required to investigate or provide academic accommodations so the survivor doesn’t interact with the accused in their classes.

The changes will also lessen the scope of mandated reporters. Previously, if a coach, residential advisor, or professor is informed, or even suspects an assault has taken place, they are required to report it and the university is obligated to have it investigated. Under the new rules, only assaults formally reported to the Title IX office are investigated. In this updated model, the coaches who failed to report about Larry Nassar at Michigan State would not be held accountable.

Lastly, and perhaps most controversial, is that the accused will have access to cross examine their accuser through an advisor at a live hearing, which can potentially include asking about mental health, substance abuse or other questions designed to embarrass. Brett Sokolow, president of the Association of Title IX Administrators shared that adding the cross-examination process would lead to a 50 percent drop in the reporting of misconduct.

Having worked with hundreds of survivors and one person wrongly accused over the last ten years, I can confidently say these changes in Title IX take us backwards, tilting the scale too much in favor of the accused and forcing all the Dinahs on campus into silence once again.

Currently, there is a sixty-day public review and comment process. All students will have the opportunity to review the proposed Title IX regulation and make their voice known in this process.

This short window of time is a critical opportunity for people of all perspectives, even those who disagree with me, to weigh in on a policy that will impact hundreds of thousands of students in our communities. We are coming off the heels of the highest turnout by young people in a mid-term election. Let’s continue this momentum and engage in this incredible process, allowing all voices to be heard and ensuring that Dinah will never be silenced again.

Sheila Katz is the Vice President for Student Engagement and Leadership at Hillel International. She is co-chair of the Steering Committee of the Safety, Respect, Equity Coalition, a coalition to address sexual harassment and gender discrimination in Jewish institutions and communal spaces. Comments expressed here are her own, not necessarily those of her employer or any other organization.