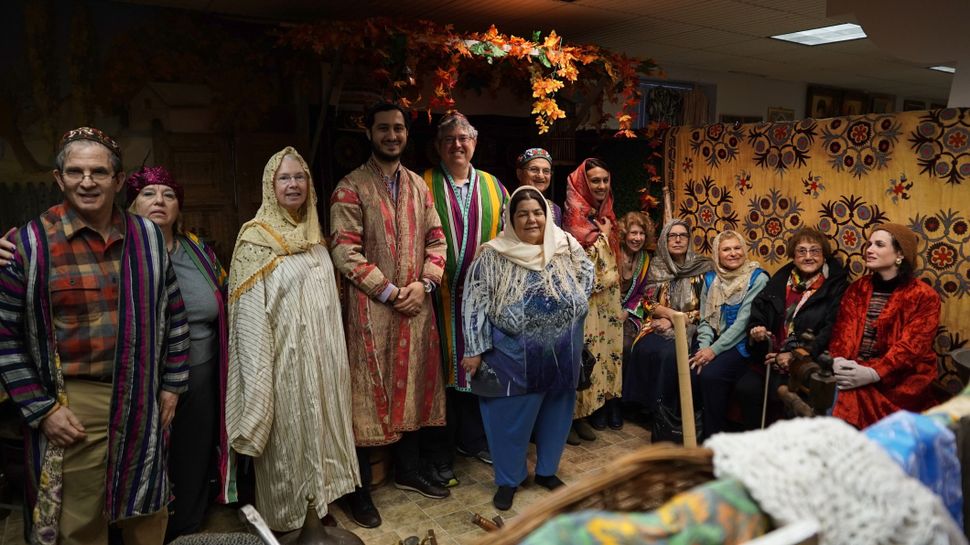 The most common misconception about Bukharian Jews?

Manashe Khaimov hesitates for a few seconds, then answers: “That we are Russian Jews. The only thing we share with Russian Jews,” he continues, “are the 70 years we lived under the Soviet Union. For 2,000 years, we had a different history, a different culture.”

A community little-known even to other Jews, Bukharian Jewry claims two millennia of history in Central Asia, namely in today’s Uzbekistan, Tajikistan, Kyrgyzstan, Turkmenistan and Kazakhstan. Following the collapse of the Soviet Union in 1991, most of them migrated to Israel and the United States. Khaimov estimates that, today, some 70,000 Bukharians live in Queens, New York.

Now a New Yorker himself, Manashe Khaimov, 31, was born in Samarkand. He arrived in the United States with his family as a teenager in 2001, a couple of weeks before 9/11. He calls himself a “social innovator”: he’s a community organizer and the founder of the “Jewish Silk Road Tours”, in which he takes small groups to discover for a few hours his community in Queens. Khaimov started leading the tours in 2017 to offer a glimpse into his people’s history and long-standing customs, while supporting local businesses. His tour includes a stop at one of the area’s dozens of active synagogues, a visit to a traditional bakery and a live performance of Shashmaqam (traditional Uzbek) music. 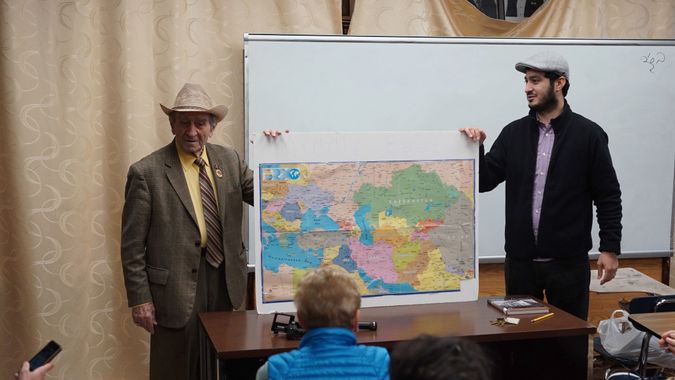 But perhaps the highlight is a visit to the appointment-only Bukharian Museum, which is now based in a local day school, the Jewish Institute of Queens.

The tiny museum was founded by Aron Aronov, a “legendary figure in the community,” as Khaimov refers to him. Aronov, who used to work as a translator in Tashkent, Uzbekistan, proudly recalls translating for Richard Nixon when he visited the country; he moved to the United States in 1989.

“New York is not a melting pot,” Aronov told visitors during a tour the Forward attended in December. “It’s a mosaic of different groups. We want to preserve our Bukharian Jewish identity.” 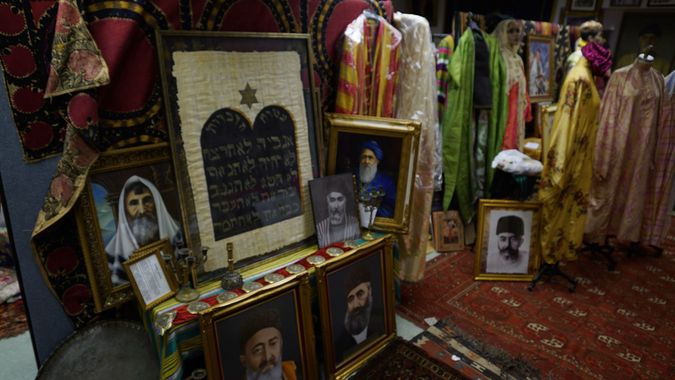 Aronov said he has collected over 1,000 items which he displays in the informal museum—two cramped classrooms that the school lent him—throughout his whole life. It’s an enormous, private collection of amassed objects and includes an ancient Torah scroll, paintings, photographs, a carriage, traditional cooking supplies, clothes and textiles, and plenty of Jewish ritual objects that reminisce of centuries of Jewish life in Central Asia.

In the middle of it all, a sign offers a warning: “A people survives as long as it transmits its heritage from one generation to the next.”

During the tour, Khaimov offers a few informal history lessons to the participants, many of whom admittedly know “close to nothing” about the community. He explains that the term “Bukharian,” an anglicization of the Hebrew “Bukhari,” comes from the name of the Emirate of Bukhara, which existed between the late 18th and early 20th century in today’s Uzbekistan. Bukharian Jews mark their migration to Central Asia starting from the Babylonian exile in the 6th century B.C.E. and the subsequent conquest of the region by Cyrus, the king of Persia. Over the centuries, they lived under the rule of different conquerors — the Persians, the Saracens and the Mongols — coexisting, not always easily, with other religions, such as Zoroastrianism and, for the most part, Islam.

Khaimov refers to the decades under Tsarist Russia’s rule as the Bukharian “Golden Age,” during which Jews were granted more rights that benefited their trading businesses. That period ended with the establishment of the Soviet Union in Central Asia. The 70 years under Communist rule were one of the most difficult times for Jews to maintain their traditions, as the regime cracked down on organized religion.

At the Bukharian Jewish Congress of United States and Canada, located on the top floor of the Community Center in Forest Hills, Queens, visitors can see a long line of portraits of historical figures hanging, one after the other, in the narrow hallway that circles the offices. One of them is the portrait of Shimon Hakham, a rabbi who translated several religious books into Bukhori—a Persian dialect that blends Hebrew and Tadjik influences—making the texts more accessible to the local Jews. 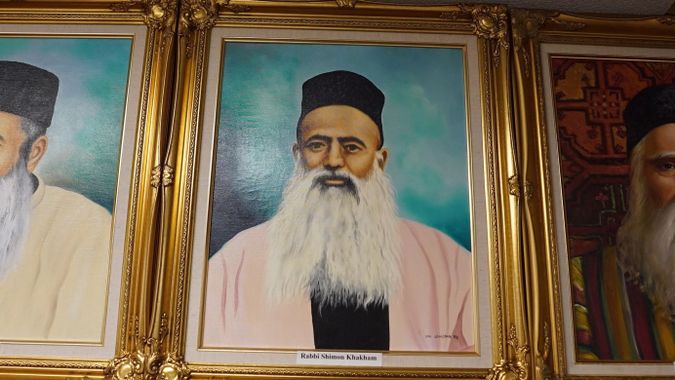 At the Bukharian Jewish Museum Image by Daniel Allen 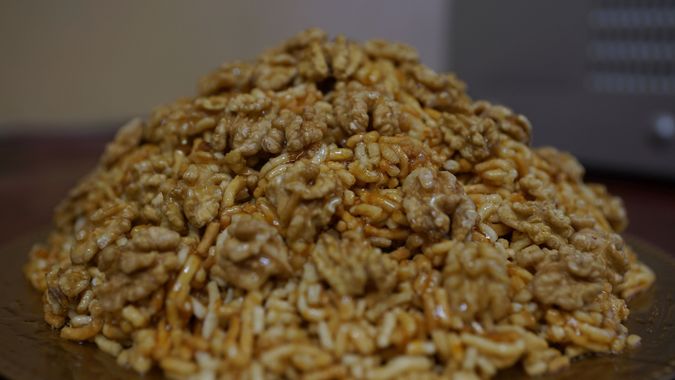 The following stop of the tour is a visit to the Rokhat Kosher Bakery, an unadorned space filled with the most delicious scent of freshly-baked goods. Rokhat sells a vast selection of traditional Bukharian delicatessen: noni toki (a matzah-like, bulgy flat-bread), samsa (meat-filled pastries) and the addictive chak chak (a fried honey cake whose name literally signifies chatter).

“I do my tours with intention,” says Khaimov, explaining he tries to “hit all five senses of human nature” to get the attention of all types of learners. No wonder then that after seeing a synagogue, touching precious textiles, smelling the freshly-baked pastries and tasting a traditional kosher meal, participants also get to listen to some music, performed by the Shashmaqam Ensemble. They are part of the Center for Traditional Music and Dance, which defines their music as a “cultural symbiosis” of Jewish and Muslim tunes. Percussions, like the tar and the doire, accordions and clarinets accompany the lyrics, which draw on Persian poetry. 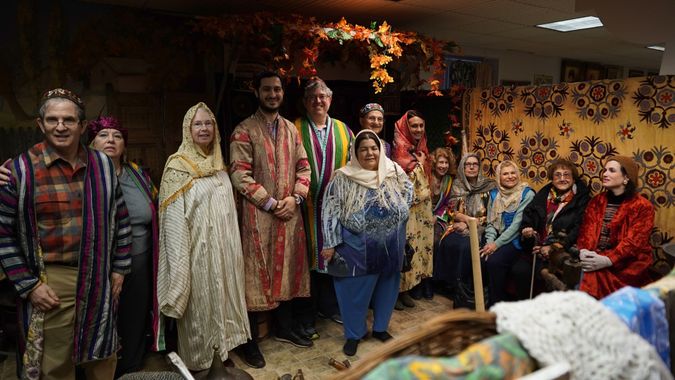 “We preserve those tunes in the synagogues, too,” says Khaimov, explaining that they’re often readapted to Jewish prayers, like the Shabbat song, Shalom Alechem.

Khaimov does not try to gloss over the community’s challenges — talking about growing drug abuse among Bukharian teens, and the racial tensions that exist in Forest Hills, where recently, a 16-year-old Bukharian yeshiva student was beaten in the street by local teenagers and hospitalized.

“The tour is an opportunity for me to give back to my community,” he says. The initiative, part of Yiddish New York, is sponsored, among others, by the Council of Jewish Émigré Community Organizations. “The idea, beyond educating people, is to support the local Jewish infrastructure.”

Simone Somekh is a New York-based author and journalist. He’s lived and worked in Italy, Israel, and the United States. Follow him on Twitter @simonesomekh. Video and photos by Daniel T. Allen.