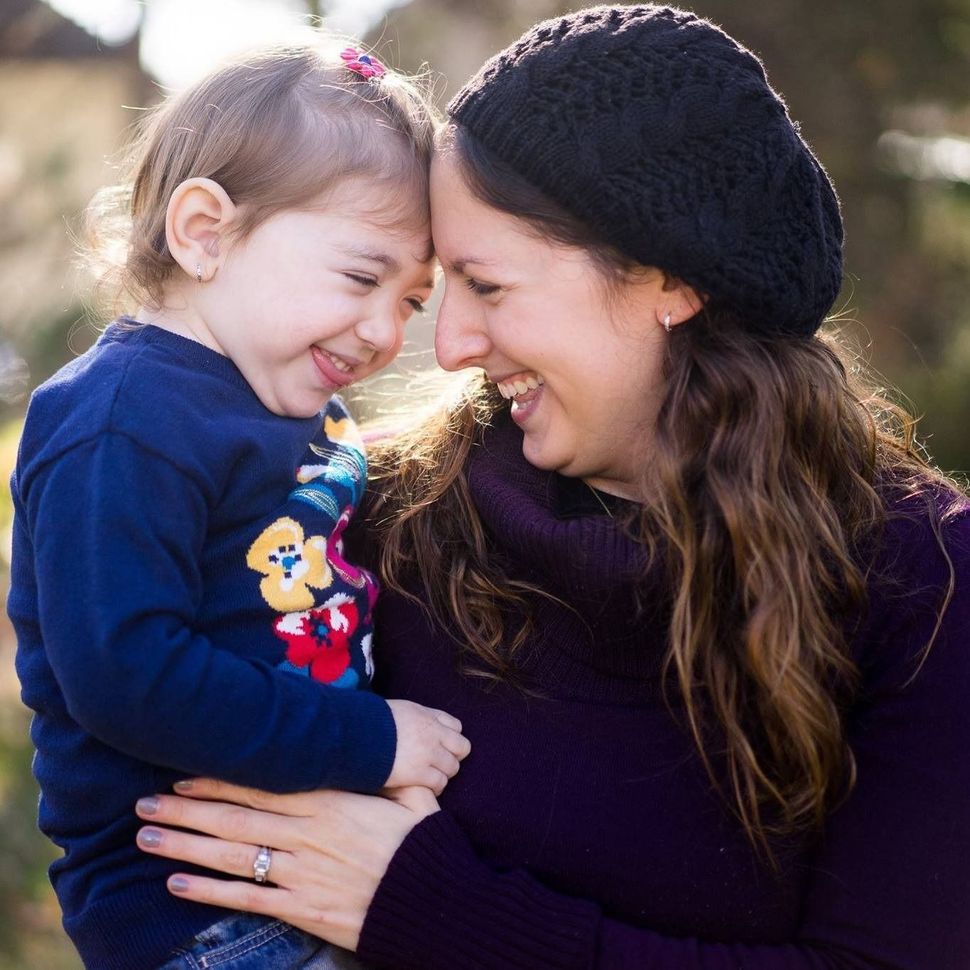 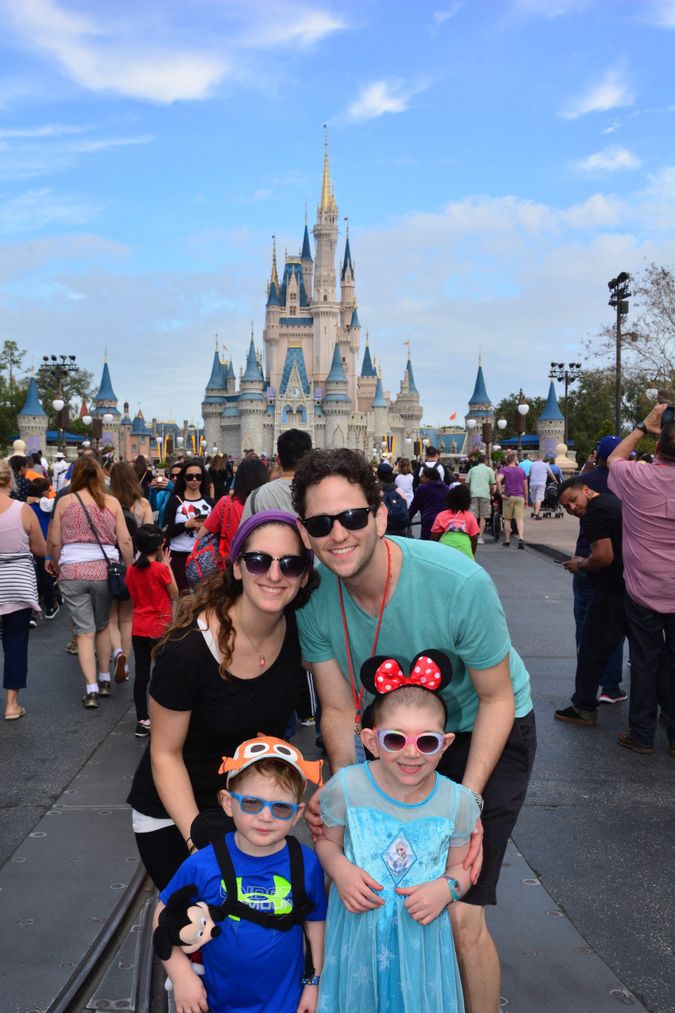 The Spangenthal family on a trip to Disney World, January 2019. Image by Photo Courtesy of Jennifer Spangenthal

Finding a Fortune 500 company that appreciates work-life balance is a challenge in corporate America, and Jennifer Spangenthal was sure that she had found one — right until her daughter was diagnosed with cancer.

Spangenthal, a New Jersey mother of two, who identifies as an Orthodox Jew, was drawn to a career in human resources because she wanted the opportunity to “provide flexibility to other people and help them navigate their lives,” she told the Forward. In 2014, she began working for the consumer goods company Unilever, which owns brands including Lipton, Hellmann’s and Suave. There, Spangenthal worked directly with employees to support their daily HR needs including benefits and conflict resolution. She hoped her family could personally benefit from the company’s seemingly flexible family leave strategy, as well as help other employees. “I thought I might have found the role that would help me achieve this elusive work-life balance, given their renown for family-friendly work policies,” she said.

But just as she returned from maternity leave following the birth of her son JJ, Spangenthal and her husband David heard four words that are every parents’ nightmare: “Your child has cancer.” Their three-year-old Sophie was fighting for her life, with a diagnosis of pleuropulmonary blastoma, a rare form of cancer that occurs in the lungs.

Initially, Unilever was fairly helpful, Spangenthal said, providing her with a period of unpaid leave. Those days were filled with endless cycles of blood draws, chemotherapy treatments, doctor visits, scans, and medical terminology, she recalled. As Sophie’s health slowly began to improve, Spangenthal brought a proposal up to her boss. She no longer felt she needed to be by her daughter’s side 24/7 and was ready to suggest returning to work, but on a part-time schedule. She never got to make the proposition.

“Before I could suggest anything, my boss got on the phone and said, ‘If you can’t come back full-time we need to ask you to resign.’” Spangenthal reluctantly resigned. She said the response was “astonishing” especially given that she had been a full-time employee with the company for over two years.

The Spangenthal family on a trip to Disney World, January 2019. Image by Photo Courtesy of Jennifer Spangenthal

Under the Family and Medical Leave Act (FMLA) of 1993, United States labor laws require employers to provide employees with up to 12 weeks of unpaid leave each year with no threat of job loss, should they or an immediate family member face a serious illness. To qualify for FMLA, the employee must have worked for the company for at least one year and there must be 50 or more employees at the business. Some states offer their own paid plans, depending on the situation, including California, New Jersey, New York and Rhode Island. Spangenthal had been on leave for over two months when her boss provided the ultimatum.

While her husband David, an employee at Google, received “exceptional” support in the initial weeks and months following Sophie’s diagnosis, including coworkers being allowed to donate personal vacation time and an offer to work remotely when necessary — across the country, many parents can relate more closely to the Unilever experience.

Robin Wilson, a stay-at-home mom in New York City, told the Forward that her three-year-old son’s leukemia diagnosis led to the collapse of her husband’s IT business. “It’s a different kind of story because my husband was the company owner, but it has to do with business culture in general. A business needs work done. But our work culture does not prioritize people,” she said. Wilson said that within six months of her son’s diagnosis, and her husband taking some time off work, employees stopped showing up and clients “didn’t care.”

A study published in Pediatrics Blood & Cancer in 2015 surveyed the families of 99 Dana-Farber Cancer Institute and Boston Children’s patients within the first month of cancer diagnosis and then a second time six months later. It found that about one-quarter of families of children being treated for cancer lost more than 40 percent of their total household income, while one-third experienced housing, energy or food insecurity.

Reportedly, at the time of diagnosis, 20 percent of the families surveyed were low-income (defined as those earning less than twice the federal poverty line). Six months later, an additional 12 percent of families had suffered financial mishaps that placed them below the federal poverty level. Six months after the initial diagnosis, 56 percent of the adults who were supporting their families reported an interference in their work, with 15 percent of parents either quitting or being fired from their jobs. Additionally, 37 percent of the surveyed adults were forced to reduce their hours or had to take a leave of absence from work. Only one third received pay during their time away from work taking care of their child.

Spangenthal said that in her situation, finances were not the most pressing matter. “I wasn’t expecting to be paid. All I wanted was to have a job when I got back,” she said. Since her resignation in April 2017, Spangenthal has devoted her time to being a full-time mother, but said she often considers returning to the work force. Sophie, who is now five-years-old, faced a relapse in March 2018. She finished her latest round of treatment this past November, around the same time that Spangenthal worked up the courage to write an opinion piece that she had been toying with for over a year.

On January 2, NBC News published the piece, headlined “A Fortune 500 company hired me to help them be more family-friendly. Then my own kid got cancer,” written in first-person by Spangenthal. “While many areas of our personal and professional lives have evolved to become more humane, corporate America yet has yet to take notice: Humanity needs to return to corporate America,” she wrote, as she shared her family’s story with the world.

Spangenthal told the Forward that her motive in publishing the story was “to make people become aware that especially in big companies, you really are treated as just a number.” She added that “the image Unilever displays in the media is very different from what really happens. There’s no employee loyalty. Nothing gets in the way of their financial gain.”

Spangenthal said, for employers, there is no single approach that can fit every situation. “I think it’s very much a matter of being sensitive to an employee’s needs. There’s no words to describe how you feel when your child is sick,” she said. “It’s just about having empathy and not kicking somebody when they’re already down.”