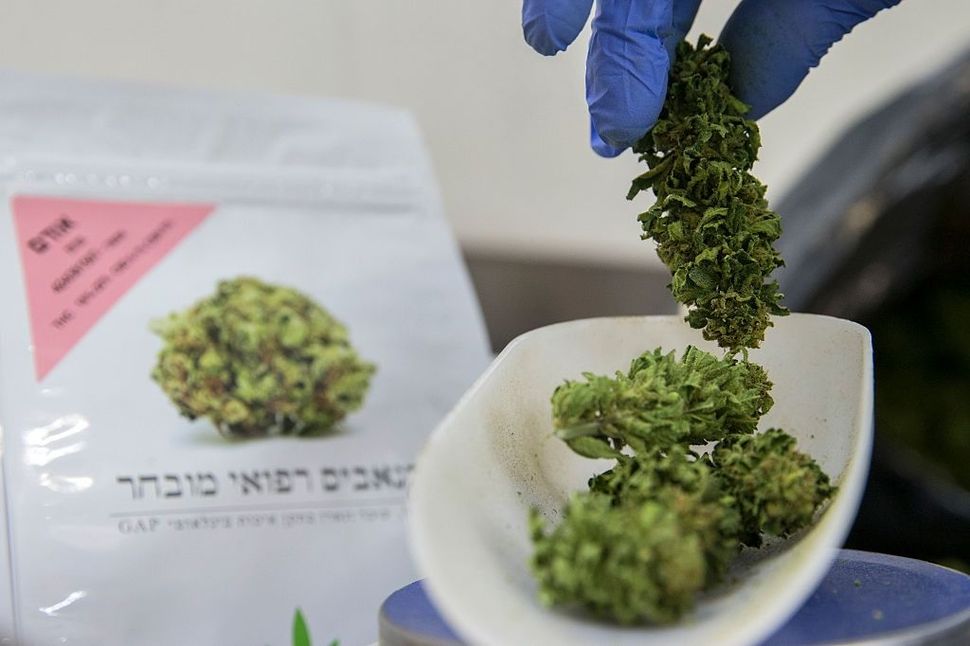 Cannabis is taking off in Israel and America — so when will it get a place on our Seder plates? Image by Getty Images

For so long, in Judaism and elsewhere, “getting stoned” meant getting literal stones thrown at you until you died.

Now it means getting high on marijuana.

And isn’t that freedom?

Well…said the seventeen rabbis and spiritual leaders contacted by the Forward for this story. Not — well — uh, not exactly?

This year, the second night of Passover and its accompanying Seder land on 4/20, a day that is culturally associated with pot consumption (you can thank some Jews for that, by the way.) The last time a Seder landed on 4/20 was in 2008, and the next time it happens will be in 2037. In 2008, recreational cannabis was illegal in all 50 states. Today, it’s legal in ten states, plus Washington, DC.

Once we were slaves, and now we are free to partake, unless you are one of the number of disproportionately black Americans who are still incarcerated for marijuana possession. In Washington, Oregon, California, Nevada, Colorado, Michigan, Massachusetts, Vermont, Maine, DC, and Alaska, smoking it, toking it, eating it, vaping it, rubbing it into your crevices — it’s all on the table these days. Just not, necessarily, on the Seder table.

“We’re a Reform congregation and we of course are quite progressive, and yet like Jews of every denomination, the focus will be on our people’s movement from slavery to freedom and our individual stories of redemption,” said Rabbi Richard Rheins, the Senior Rabbi at Denver’s Temple Sinai, which is expecting hundreds of participants for second night Seder. “It will be lovely, but marijuana will not be a part of it,” he sighed. “There’s no place for that on our Seder plate.”

“Our Sinai seder will not be referencing 4/20,” said Rabbi Hannah Goldstein, of Washington DC’s Temple Sinai. “Would love to read this article, but nothing useful to contribute.”

“I love that and I’m mad I didn’t think of it myself,” said an Orthodox Rabbi in Washington, DC. Still, no plans to use the bitter herb to make the night different from others.

“Sorry Jenny, no time to reply on this. Got other stuff to do,” wrote a Nevada rabbi, apparently forgetting that the Tanakh says there is a season for everything under heaven.

For this we left Egypt?

What about Oregon, a state that is suffering (hmm) from a “weed surplus?” The legislature of Oregon ambled straight past legalization and is aiming to become the first state to legally export marijuana. Plus, some combination of an ideal cannabis-growing climate and a culture of enthusiasts has blessed and cursed the Beaver State with the cheapest legal weed in the country.

My parents are very orthodox, so every 4/20 we had to have a whole seder before we could rip the bong

Claire and Roy Kauffman’s nonprofit “Le’Or” (it means “to light” or “to illuminate” in Hebrew) works “to erode the stigma, so that the Jewish community at large can see that supporting marijuana legalization is not just the right thing to do, it’s the Jewish thing to do,” Roy Kauffman told the JTA in 2015. Le’Or hosts its annual Le’Or Cannabis Passover Seder for Peace for “high-minded Jews to spark up Seder conversations.” The organization has produced and distributed an influence-influenced-Haggadah so that all Jews can bring pot to Passover.

“To be honest, I was not aware of the 4/20 thing,” said a Portland rabbi. (After learning of the local Le’Or Seder, he wrote to the Forward, “I am just pleased that there is so much creativity and diversity in the Jewish Community.”)

“Unfortunately we are not,” said a Reform rabbi in Brooklyn, of his synagogue’s plans to theme second Seder around reefer madness. “Although like, what? Why not?”

“I doubt it,” said the executive director of a synagogue in Boulder, before adding, “Do MJ matzo balls float?” (By the way, they do.)

“I think it’s great that you’re covering this!” wrote Rabbi Jeffrey Falick of the Birmingham Temple Congregation for Humanistic Judaism. Falick was a leader among clergy who bolstered support for legalization in Michigan, calling the prohibition of marijuana a “social justice crisis through inequitable enforcement of the law in African-American communities” and touting the possible health and tax benefits of legalization and further research. Rabbi Falick even welcomed Cannabis researcher Dr. Sue Sisley to preach on the subject from the bima on a Friday night.

Birmingham Temple Congregation for Humanistic Judaism will not be having a 4/20-themed Seder. “Most additions to our Seder will be related to the human rights of immigrants and refugees,” Falick told the Forward. Though he “might mention it,” any mention will be used to open a discussion about the responsibilities that accompany freedoms, namely “responsible use for those who partake” as well as “assuming responsibility for correcting the wrongs committed by the justice system through its disproportionate enforcement of cannabis prohibition directed at African-Americans and other people of color.”

Besides, legalization doesn’t mean destigmatization. Gail Wartell, a member of the administrative team at the unaffiliated egalitarian synagogue Adas Yoshuron in Maine, which will likely not bring the chronic to community Seder, said that the newly legal substance hasn’t truly been normalized in Maine. Rather, the Seder will focus on themes of refugees and asylum. “While I personally think it is important to stop criminalizing cannabis, I’m not sure how I feel about it being a topic at a Seder,” said Wartell, a painter and kombucha-brewer.

On Saturday night, I will attend a young adult Seder at Congregation Emanu-El in San Francisco where, full disclosure, both of my parents are employees. Graphic design for the event simply reads “4/20” in gleaming gold numbering.

San Francisco. Youth. 4/20. This, I believed, is the Seder I had been looking for.

“Our Seder will not have anything to do with marijuana,” Emanue-El’s Rabbi Jason Rodich wrote to the Forward. “The beautiful themes of human liberation and justice, and the radical idea that all people deserve a life flowing with milk and honey are pretty high ideals in and of themselves.”

Acknowledging the “tongue-in-cheek” Seder advertising, he said, “I still contend that the Exodus story, which is really a profound story of social transformation, is bright enough without lighting anything else.”

Ah, well. Once we were slaves, and now we are free. On Friday and Saturday we will break and bless and wash and praise, and maybe some will partake of a very special kind of flourless chocolate brownie. In Manhattan, Brooklyn, Los Angeles, and San Francisco we may attend Kosher-le-ganja holiday events, though they won’t be hosted by our houses of prayer, not quite yet.

Just as we have merited to order it, so too may we merit to do it. L’shana haba’ah b’Mary-Janerushalayim. Next year, may we all be, in whatever way feels most right, free.